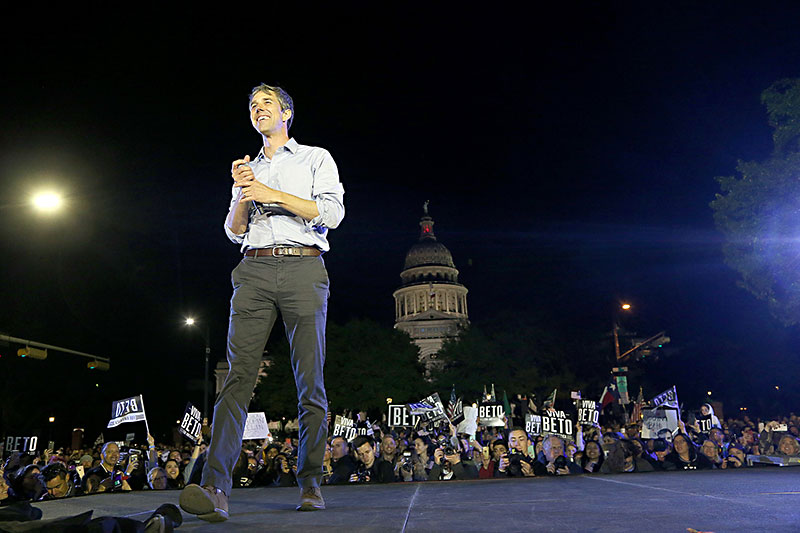 Beto O'Rourke tells the crowd, "We've come to say thank you for literally changing the face of democracy in Texas. What you did in 2017 and 2018 is nothing short of a miracle." (Photo by Gary Miller)

If You Build It: City Council hosted a team of UT-Austin researchers at the Central Library Tuesday to hear their report on possible expansion or replacement of the Convention Center, which imagines a larger, more open, pedestrian- and commerce-friendly space integrated into the broader Downtown. See "Convention-al Wisdom," April 5, for more.

Lost Our Appetite: In retaliation for its LGBTQ support, A.G. Ken Paxton launched an investigation into San Antonio after the city booted Chick-fil-A from its airport following reports the fast food chain donated $1.8 million to anti-LGBTQ groups. Paxton wrote: "The Constitution's protection of religious liberty is somehow even better than Chick-fil-A's chicken."

Border Lege Crisis: The GOP-led Texas Senate whipped up anti-immigrant hysteria this week when they passed a resolution deeming the situation at the Texas-Mexico border a "crisis" and requested that Congress fully fund border security. The resolution was news to Democratic senators, who said they hadn't seen the measure until it reached the floor – probably because Sen. Paul Bettencourt, R-Houston, bypassed the upper chamber's normal rules to speed through the process.

Closing the Door: The Senate's border hysteria coincides with President Trump's unhinged threats to close the Texas-Mexico border altogether, despite warnings from Texas business leaders that such a move would devastate the state and national economy. Meanwhile, continued economic disruption and political crises in Central America have added to the flood of refugees heading north.

The Count Counts: Austin and Travis County joined the April 1 national day of action to promote the 2020 census as the basis of federal information and proportional funding. "Everyone who lives here counts," said Mayor Steve Adler, announcing the formation of a joint city-county Complete Count Committee to promote an accurate and complete census.

Pinnacle for Sale: The Austin Com­mun­ity College Board of Trustees voted on Monday to put the college's southwest Pinnacle campus on the market. The 9-acre building, which sits on a 55-acre lot near the Y in Oak Hill, closed last summer to assess needed repairs and develop a long-term plan for the site. ACC leaders will accept bids for about a year before deciding whether to sell or pursue other development options.