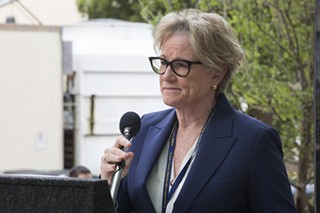 U.S. District Judge Lee Yeakel ruled Tuesday that Nueces County is in the "best position to decide what's best" concerning Borchardt's request, which was prompted by a Sept. 14 phone call in which Montford shared both confidential and false details of Borchardt's sexual assault case with a third party. (The D.A.'s Office declined prosecution of Borchardt's case last year.) In closing Tuesday, Yeakel noted that Bor­chardt's request could result in a lawsuit, but clarified that it would be separate – at least for now – from the federal class action suit currently pending in his court. That suit, filed last summer by Borchardt and seven other rape survivors, alleges that systemic failures within local law enforcement and the D.A.'s Office have led to discrimination and mistreatment of women rape survivors in Travis County. In December, Yeakel heard motions to dismiss from the city and county officials named in the suit; that ruling is still pending.

The D.A.'s Office prompted Tuesday's hearing by arguing that Borchardt was trying to "circumvent" Yeakel by requesting "broad" pre-litigation discovery in her separate Nueces County filing. Borchardt, Assistant County Attorney Tony Nelson insisted, already has what she needs to pursue a defamation claim against Montford. In response, Bor­chardt's co-counsel Elizabeth Myers told Yeakel they're "absolutely not ... trying to go around your order," noting that Mont­ford's 38-minute phone call (a transcript of which was obtained by the Chron­icle) – in which Montford described Borchardt's rape as "consensual" no fewer than 11 times – took place approximately six weeks after the survivors' amended lawsuit was filed.

Nelson also argued that as district attorney, Moore has prosecutorial immunity, covering liability, lawsuits, and discovery; this is one basis on which she seeks to dismiss the lawsuit, and Borchardt's discovery request goes "to the heart of the issue before the court on prosecutorial immunity," Nelson told the court. In addition to depositions, Borchardt has asked for the three women's phone records, any information the D.A.'s Office has about her case, and any policies, procedures, protocols, or training materials regarding communications with police or others about sexual assault cases and survivors.

Borchardt's hearing in Corpus Christi, where she currently resides with her family following her 2018 assault, will be held today, Thursday, April 4.

A version of this article appeared in print on April 5, 2019 with the headline: Moore, Montford Lose a Round in Survivors’ Suit Drama