The stories people tell themselves about the world's problems determine their own capacity to effect change. Change the story, and you can change the world.

That's the theory behind the New Story Festival, a three-day mash-up of music, spirituality, art, and environmental and social justice activism that begins this Friday, March 29, on the Huston-Tillotson University campus in East Austin. Co-founded by Austinite and historian of religion Mike Clawson, the event aims to create social change by shaking people out of their old mindsets.

"There are so many groups doing great work all across Austin, and we partnered with dozens of them to put on this event," Clawson says. "But the thing I hear from them over and over again is that they don't have the bandwidth to tackle ideologies. ... All they can do is focus on the problem they exist to deal with. So someone has to do that work. How do you actually shift hearts and minds and ideologies and values and ethics?"

“Too often, spirituality is isolated as a separate thing, which then means we don’t have a holistic approach to dealing with real social and personal change.” – Mike Clawson

Clawson found partial answers in two other festivals: Greenbelt, started in 1974 in the United Kingdom by what Clawson calls "Jesus hippies," and its U.S. offshoot, the near decade-old Wild Goose Festival in North Carolina. Clawson, a regular at the Wild Goose who wrote his dissertation partly about that festival, joined forces two years ago with its founder, Gareth Higgins, and started convening Austin progressives to brainstorm what an urban, "spiritually inclusive" cousin of Wild Goose would look like.

Their conclusions: Austin's festival would, like its predecessors, be grounded in progressive Christian values of inclusion, equality, justice, and charity. But it wouldn't have a specifically Christian – or even religious – identity. "It's not a religious festival; it's a festival at which religion is part of the mix," Clawson says. "Because too often, it's left out of the mix. Too often, spirituality is isolated as a separate thing, which then means we don't have a holistic approach to dealing with real social and personal change. [We've] chosen to include religion and spirituality and not simply ignore it."

The group also decided the New Story Festival would prioritize diversity and inclusion. "We wanted it to be more friendly and deliberate about drawing people of color and other marginalized groups, just to make sure they felt like it was their own," Clawson says. He and Higgins reached out to the Austin Justice Coalition, and its then-outreach coordinator Barry James joined the organizing team. The group chose the Huston-Tillotson campus as the festival venue and has offered free admission to the university's students, faculty, and staff.

Involving social justice activists in a festival modeled after events that are faith-based and draw a largely white audience can be tricky, James says. "Doing a festival of that nature on a historically black university's campus, we needed to be pretty intentional about what that looks like: working with the students to facilitate and host certain portions of the programming, and making inroads with the community at large at H-T."

The festival's headliners include Nadia Bolz-Weber, a liberal Lutheran pastor whose most recent book is called Shameless: A Sexual Reformation; Charles Eisenstein, who writes and hosts a podcast about ecology, spirituality, and economics; and the Rev. angel Kyodo williams [sic], an African-American Zen Buddhist priest who writes about the intersection of spirituality, mindfulness, race, and social justice.

Other sessions tackle the headlines: "Jesus and #MeToo," "Christian Responses to Confederate Statues and Symbols," "Listening to Children Talk About Race." Musical performances include local hip-hop duo Riders Against the Storm and Austin singer-songwriter Carrie Rodriguez.

But Clawson emphasizes that "it's not just a bunch of talks with music between, but a choose-your-own-adventure smörgåsbord." Those adventures include poetry readings, games, community singing, storytelling workshops, and meditation. A raft of exhibitors in the "healing arts" – massage therapists, acupuncturists, life coaches, spiritual directors – will offer complimentary sessions to festival attendees.

The presenters' biographies can skew abstract ("justice doula," "empowerment facilitator," "tribe-weaver"), perhaps leaving the left-brained scratching their heads. But the Offers and Needs Market on Sunday evening is a deliberately pragmatic event meant to help participants forge connections that last beyond the festival.

"The tagline of these forums is 'We already have everything we need,'" says K. Stellar Dutcher, a festival organizer who has participated in such markets before and will facilitate the event. "Everything we need is already here in our community." In small groups, participants will brainstorm resources they can share: physical space, supplies, expertise. After making connections with people in their group who can use those resources, they'll repeat the process with their needs, which might include website design or child care during meetings. The market could, for example, connect a social justice group that needs a meeting space with a church whose rooms sit empty most of the week.

Those alliances between previously unlinked groups are a key mission of the festival. By pitching a big tent and inviting secular, faith-based, artistic, environmental, and activist groups, the organizing team is trying to help local progressive organizations find common ground. For instance, James says, an organization like Austin Justice Coalition that largely focuses on criminal justice reform might have similar objectives to groups working on reproductive justice or LGBTQ issues – but with everyone's time and attention at a premium, it's easy to work in a silo. "Sometimes it takes an effort like this to get people to connect and understand that their goals are actually more aligned than they realized," he says.

That's already happened within the organizing team. For Dutcher, learning about the progressive Christian tradition was illuminating. "I kind of knew they existed, but I had no idea the extent of the work that they're doing," says Dutcher, who does not identify as Christian. "I've been having a hard time finding a reflection of who [Jesus] was in most of what I've seen of American Christianity today, in terms of 'love your neighbor, work with the poor, be with the least of us, challenge the power structures of the day.' But there are people doing what I perceive as Jesus' work, still."

Clawson says his team expects between 500 and 1,000 attendees in the festival's inaugural year. It's been challenging to explain exactly what the event will be like, simply because few precedents exist. "People are used to music festivals, to conferences and conventions, to campouts, and to political rallies, but there's nothing that tries to combine, in a holistic way, the best elements of all those things," he says.

The team anticipates growing the festival as word spreads, much as Wild Goose has grown since its founding. In this first year, Dutcher says, the best outcomes would be conversations and relationships that change people's thinking.

"It's the power of gathering people from different communities who really don't even know that the other people exist," Dutcher says. "There's something about getting the embodied, in-person awareness that 'I've never met you before, but you want the same things I want, you're fighting the same fight that I am, and you're doing it with people that I've never met.' ... That bolsters me in my own work and in my own small piece of the fight." 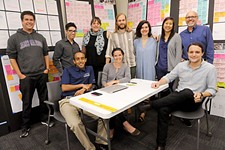