Catching up with the dais as they bet on success 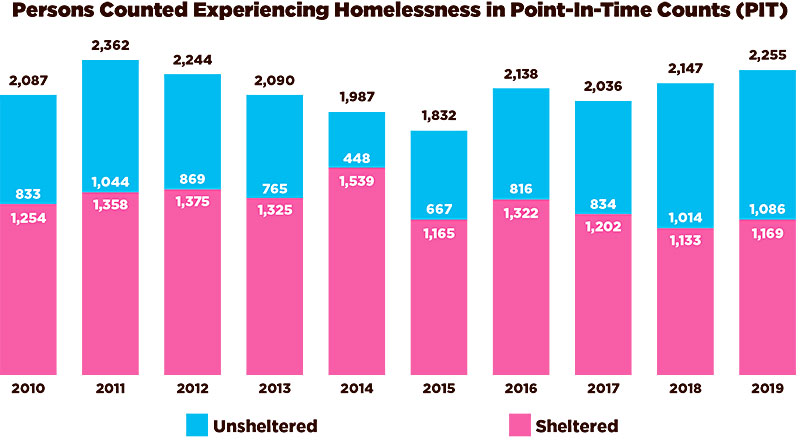 Both sheltered and unsheltered homelessness increased in this year's Point in Time Count, by a total of about 5%, although the number of Austinites entering permanent housing also increased.

In what has become an annual ritual, local leaders on Tuesday, March 26, revealed the results of the 2019 Point in Time Count of people living without homes in Austin and Travis County. Compared to 2018, this year's count (conducted Jan. 26) saw an overall 5% increase in sheltered and unsheltered homelessness, with the latter reaching its highest level since the federally mandated one-night census moved to an annual (rather than biennial) count in 2010. The good news, however, according to the city and its partners at the Ending Community Homelessness Coalition, is that Austin's existing efforts to end homelessness among young people and veterans are continuing to succeed, and that after a one-year decline the number of people moving into permanent housing is again on the rise.

Pay for Success is a framework in which up-front private money goes toward housing and services to break the cycle of chronic homelessness and high-cost police and ems calls, jail stays, and emergency room visits.

The Point in Time numbers set the stage for Council's consideration today (Thursday, March 28) of its first Pay for Success project to increase both the number and the success rate of people exiting homelessness. (It's Items 16-17 on the 85-Item agenda.) Pay for Success is a framework for social impact investing, in which up-front private money goes toward (in this case) housing and services, coordinated by ECHO, for up to 250 people that can break their cycle of chronic homelessness and the accompanying high-cost police and EMS calls, jail stays, and emergency room visits.

If the intervention doesn't work, then the private "impact investors" lose their money, but if the desired outcomes are met (as established by an independent evaluator), the "payors" deliver a return on the investment. Here, those payors include not only the city but also Travis County, Central Health and its Community Care Collabor­ative, and the Episcopal Health Founda­tion, along with grant funding received by ECHO for this project, which has been in the works for more than four years. The private intermediary here is Social Finance, Inc., the nonprofit funder that developed the first social impact bond program in 2010 (in the UK) and whose supporters include a glittering roster of financial institutions, philanthropies, and tech enterprises.

Mobility issues could take up a lot of space at today's meeting, as Council approaches transportation policy from several different directions. (See "Public Notice," Mar. 29, for more on this.) The most significant of these for the long term will be the adoption of the Austin Strategic Mobility Plan (Item 50), which has made its way through public meetings and city commissions and arrives at the dais for the first, and almost certainly not the last, time. With amendments in the offing from both staff and Council (particularly Council Member Jimmy Flannigan and Mayor Pro Tem Delia Garza) and much to discuss, today's meeting may feature speakers but no vote, or just a first-reading approval. Council will also consider mobility-related amendments to its Strategic Direction 2030 five-year plan (Item 14), new "micro-mobility" rules for scooters and their kin (including the first penalties for traffic violations – Item 32), and calls to expedite mobility projects already approved in the 2016 and 2018 bond elections (Item 40) – presaging a push for an even bigger, transit-focused, 2020 bond.

At the intersection of mobility and homelessness are two pertinent items. Council is being asked to approve a contract (Item 30) to take over overpass cleanup from the Texas Department of Transportation, which gave the city abrupt notice that it was walking away from an agreement in place since the Eighties. The contract, with TxDOT's existing vendor, includes provisions for working with the people currently living under those bridges and the agencies serving them. Another home for those sleeping rough Downtown, Brush Square is slated for a makeover in line with the work done at its sister Republic Square; Council will consider adopting the master plan for this renewal effort (Item 15), which coincides with Capital Metro's kicking off construction of its new Downtown Station, which adjoins the square.

On the zoning front, most new cases are likely to be postponed, but Council will return its attentions to some of the cases we've told you about in recent weeks, such as the Avenue D floodplain variance (Item 54) and the Town Lake Circle rezoning of the Mesh Apartments (Items 77-78), which has split the usually pro-density alliance of CMs Greg Casar and Pio Renteria. Other returning cases include a row-home project on Alamo Street in East Austin (Item 79) and the Flats on Shady apartments at Shady Lane and Airport Boulevard (Items 73-74), which Council first voted on way back in August 2018. And, in an item sure to warm the hearts of Old Austinites, 1511 E. Sixth Street – built in 1914 as a butcher shop, but better known to you as Cisco's – is seeking, and will most assuredly receive, historic ­zoning.