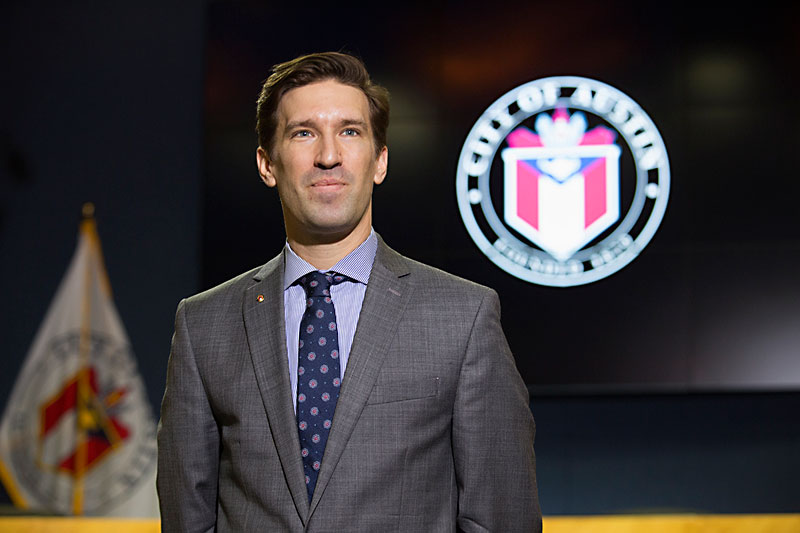 City Manager Spencer Cronk dropped a memo to City Council last Friday, March 15 – his "initial response" to last August's City Council resolution asking him to "develop and propose a new process leading to a Land Development Code" rewrite. In the past seven months, Cronk has come up not with a process, but a request for policy direction from Council, in the form of a set of fairly simplistic multiple-choice questions, backed by appendices laying out the broad strokes of the policy questions around four of the more contentious issues surrounding the code rewrite. Lest the members get too bogged down in details, Cronk suggests, "the simplest approach would be to vote for one of the choices offered on each of the five questions," A, B, or C. So without further ado:

1) Scope of Code Revision. "To what extent should the Land Development Code be revised?" Should we just touch up the current code, or completely rewrite both the code and mapping, or do the text only, with mapping (the hard part) to come later? It's really no choice at all, because, "For a variety of reasons, staff does not recommend adopting a new Land Develop­ment Code that would take effect without concurrently adopting a new Zoning Map. ... [S]taff recommends continuing forward with adoption of both a new Land Develop­ment Code and new Zoning Map."

The other four questions address specific flashpoints with the same menu of options: A, to "preserve regulatory limitations comparable" to the current code; B, to "implement the types of regulatory changes proposed in Draft 3 of CodeNEXT"; or C, "a more significant departure ... than was proposed in Draft 3 [and that] would generally provide for greater densification and housing capacity." The framing puts Council in a box from the start, because no one favors the status quo; that leaves the wildly uneven and incomplete CodeNEXT Draft 3 as the effective starting point, and gives it a lot more credibility than it ever had in its brief lifetime.

2) Housing Capacity: "To what extent should the Land Development Code provide for additional housing capacity in order to achieve the 135,000 additional housing units recommended by the Strategic Housing Blue­print?" Option A is, in the city manager's view, insufficient to this task; as Cronk frames it, Option B "relies primarily on ... an expanded density bonus program that increases allowable densities for developments with affordable housing units." Option C could increase "'by right' entitlements that do not require developers to provide affordable units," and/or further expand the density bonus program, and/or reduce requirements for parkland and open space dedication, tree preservation, or transportation or utility easements, each of which "serves important purposes, including the protection of public safety and the environment." Of those, only the expanded density program seems palatable, and indeed, Greg Casar's "Affordabil­ity Unlocked" resolution ("Good Change Is Good," Feb. 8) is already heading that way.

3) Missing Middle Housing Types. "To what extent should the Land Development Code encourage more 'missing-middle' housing types, such as duplexes, multiplexes, townhomes, cottage courts, and accessory dwelling units?" Option B describes various enhancements envisioned under CodeNEXT: smaller projects on small lots, more units on most lots, and in general, more "small-scale multifamily uses, as well as ADUs, condominiums, and townhomes." All of this may be low-hanging fruit, since all are already allowed in various combinations in the neighborhood plans, NCCDs, and other small area plans currently in place. (While you might think that provides a blueprint for a path forward, Cronk never mentions such planning efforts in his menu of options.) What may be more contentious is Cronk's assertion that under Draft 3 mapping, "the supply of missing middle housing would be unlikely to increase substantially [without] appropriate and context-sensitive mapping of new zoning districts." With such mapping, Option C measures here might include "new transitional zones [in] a larger portion of the areas located along commercial corridors," and "further reducing site development standards [such as] minimum parking requirements, limits on floor-to-area ratio, and modified compatibility standards."

4) Compatibility Standards. "To what extent should the City's 'compatibility standards' (i.e., rules limiting development near residential properties) be modified to provide additional opportunities for development?" After noting that current standards "may limit the construction of new multifamily units and result in a certain degree [of] unpredictability for developers," the memo describes how "Draft 3 sought to modify compatibility standards to allow construction of more housing units and increase predictability while still providing a basic level of protection for single-family homes near commercial sites." The memo seems to recommend, as an Option C measure, baking compatibility into the zoning categories themselves. "Compatible transitions can be created by applying high-density, mixed-use zoning on corridors and activity nodes, moderate density adjacent to the corridors ... then stepping down to a lower-density residential core. ... [H]owever, it's important to keep in mind that not all corridors are alike, and context would need to be considered in how transitions are applied." A second opportunity – also already envisioned in "Affordability Unlocked" – is to waive compatibility for projects that provide affordable housing

5) Parking Requirements. "To what extent should ... minimum parking requirements be modified to provide additional opportunities for development and/or encourage transit options consistent with the Imag­ine Austin comprehensive plan?" On the one hand, everyone, and every planning document, aims to decrease the dependence on automobiles; yet the study notes that the Austin Strateg­ic Mobility Plan's most optimistic goal is "a 50/50 mode share (i.e., 50% drive-alone, 50% all other options combined)" by the year 2039. And, "Even in the Central Business Dis­trict, which does not have parking minimums, the Downtown Aus­tin Parking Strategy acknowledges the importance of providing parking, but with the understanding that parking management and 'shared parking approaches are the only way to cost-effectively unlock downtown's growth potential'" – though this memo doesn't contemplate what those shared parking strategies might be citywide. In brief, the memo outlines the current parking requirement of two spaces per housing unit and a range of commercial minimums; the Draft 3 proposal to roughly cut that in half, and then provide reductions from that, up to 100%, for projects near corridors, or providing "onsite features such as bicycle parking, car-share, or ... affordable housing"; and Option C enhancements all the way up to eliminating parking minimums altogether, in favor of "parking maximums to ensure developments do not provide excess parking."

That's a lot for Council to mull over, let alone distill down to five single-letter answers. But let's look for a moment at what's not in the memo. If I were a Council member, here are some things I'd ask my city man­ag­er about, before I let him loose with a new set of policy directions:

• Small area plans: How much will existing ones be respected, and how will future ones be crafted, given the need for "context-sensitive mapping" to achieve missing-middle housing, and to reimagine compatibility?

• Preserving existing workforce housing: Not a single word on the topic in 39 pages, though it's a major theme of the Strategic Housing Plan, among other places.

• Problems cited in the Zucker Report and elsewhere: It's true that the Planning and Zoning and Development Review departments have been reorganized, to good effect, but it's also true that a lot of the persistent gripes about Aus­tin's development process still have to do with those departments' processes, apart from the actual code. Is that being looked at?

• Most notably, as I remarked at the top, Cronk does not suggest a process. Presum­ing he gets the policy answers he's asked for, and presuming they're pretty aggressive, giv­en the current Council makeup, who's going to actually draft the code and draw the maps that so bedeviled our Planning and Zoning Depart­ment and $8 million worth of outside consultants for the previous four years? Recall that at the end of the last process, staff had effectively thrown up their hands and admitted that a quarter of the city was too hard to map in the new code, and the new "simpler" Draft 3 was widely derided as being bloated, too complex, and hard to use. Those are not problems that a new policy direction will fix.

Also on the Council agenda for their meeting next Thursday, March 28, is the second and third readings of an upzoning off Riverside Drive, to turn the current Mesh apartment complex into a much denser – but much more expensive – mixed use development. On first reading a couple of weeks ago, Greg Casar surprised many with his lone "no" vote, saying he couldn't support that level of displacement without further mitigation measures: more affordable units, right-to-return, relocation assistance, etc. On Sunday, he doubled down on that, penning a guest op-ed in the Statesman, vowing to raise the issues again, and calling on his colleagues to change their votes this time around. That creates an interesting dynamic, because while both sides in the density debate claim affordability as their primary motivation, this is the first time anyone on the pro-density side has so clearly articulated that "Engaging in massive displacement of working-class families runs counter to a large pro-housing and anti-displacement strategy. ... Austinites can't afford for us to do one [create smaller, denser, more affordable housing options] and not the other [protect the working-class neighborhoods we have now]." It'll be interesting to see if he can convince any of his colleagues to agree with him on that.

Cronk will walk Council through the policy questions at the Tuesday, March 26, work session. See the full memo here.