On Monday, March 18, Council Member Greg Casar published a Statesman op-ed defending his opposition to a rezoning request for the Mesh Apartments on Town Lake Circle, in the East Riverside corridor. The mixed-use upzoning would enable building of about 1,000 new units, along with retail and open space – but to do so would allow the demolition of 300 current rental units. Casar wrote that to protect middle- and working-class housing, "We must be both pro-housing and anti-gentrification," and prevent the "large-scale displacement" of lower-income families.

The argument is not new, but Casar as the odd man out on a housing proposal is unusual. His explicit objection when casting the only vote against the project on first reading (Feb. 21) was that the backup was incomplete, specifically regarding displacement. Council discussion was brief and the public hearing held open, with Casar's colleagues deferring to CM Pio Renteria, who has advocated greater density for East Riverside (within his District 3) and supports the Mesh project, set to return to Council March 28.

In a Feb. 25 online post, reporter Jack Craver called attention to Casar's vote and laid out the potential effects of the project. He noted that the allowed density bonus for the proposed project would enable "four square feet of additional market-rate space for every square foot of affordable space they build." However, should the developer forgo any density bonus, it becomes more likely that a subsequent project would "tear down the existing apartments and replace them with luxury units." In the current housing market, it's a trade-off that Council often faces.

In his op-ed, however, Casar writes, "Some argue that approving the demolition of apartments like those on Riverside would ultimately help with our affordability problem by adding to Austin's overall housing supply. I disagree." Although he doesn't say so outright, he suggests that he'll continue to oppose the project as currently described: "Approving the proposed demolition will accelerate this trend in an area that is heavily comprised of working class families of color."

Perhaps he won't be alone. On Twitter, Craver evoked responses to his post from both Casar and Renteria. Casar posted, "It's been my long held position that we should avoid speeding up the elimination of low/moderate income homes as we address our housing shortage. There are many other urban places to add more housing." And Renteria provided an "edit" of Craver's last sentence: "My sense is that Pio Renteria, the CM for the area, is inclined to support it, as long as there is some [substantial] affordable housing [and includes the right to return for the current residents]." 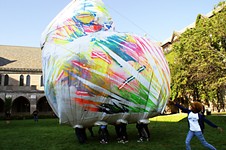