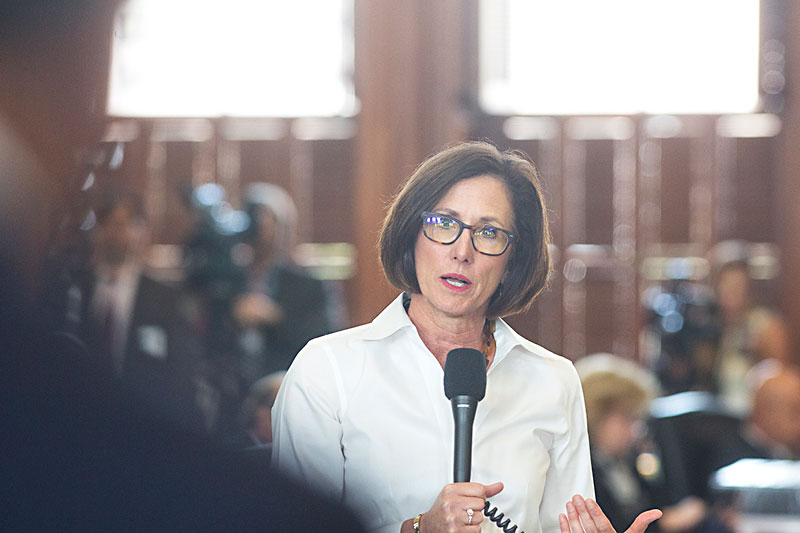 Sen. Lois Kolkhorst, R-Brenham, says the Senate will "do what is right, in a Texas way." (Photo by Jana Birchum)

On Thursday, March 7, Rep. Jeff Leach, R-Plano, and Sen. Lois Kolkhorst, R-Bren­ham, introduced their "Texas Born-Alive Infant Protection Act" in a Capitol press conference. Their companion bills (House Bill 16 and Senate Bill 23) seek to ensure that an abortion doctor "exercises the same degree of professional skill, care, and diligence to preserve the life and health of the child" for any baby born alive after a failed abortion. "The Texas Legislature cannot and will not remain silent," said Leach. "A baby who survives an abortion deserves the full protection of the law and the highest standards of medical care." Offending doctors could face a lawsuit and a civil penalty of at least $10,000.

The bills piggyback off the national GOP's current fervor over the nonexistent plagues of "late-term abortions" and "infanticide." A New York state law passed in January allows abortion after 24 weeks if a physician determines that the woman's health or life is at risk, or if the fetus is nonviable. President Trump turned this into a charge that Democrats are attempting to "execute babies" – bungling the facts and claiming the law legalized abortion until the moment of birth. (Responding to a similar bill filed in his state, Virginia Gov. Ralph Northam, a pediatric neurologist, described what actually happens when a nonviable fetus is born, which provoked the political blowback that took an unexpected turn into blackface and beyond.) A bill similar to the Texas legislation was filed in the U.S. Senate in late February but didn't pass, which only emboldened anti-choice legislators here. "The U.S. Congress failed to protect these babies born after a failed abortion, but we are going to do what is right, in a Texas way," said Kolkhorst.

In the real world, a 2002 federal law already extends legal protection to infants alive after abortion, and since Leach, Kolk­horst, and their colleagues banned abortion after 20 weeks in 2013, late-term abortion is exceedingly rare in Texas. Nationally, just 1.3% of abortions occur at or after 21 weeks, according to federal health data. Those are almost always when a fetus has a fatal condition or a mother's life is in jeopardy.

"Contrary to the popular narrative we've been hearing this session about legislators focusing on the kitchen table issues Texans care about, Kolkhorst's and Leach's bills prove to us that the extremist lawmakers are hellbent on using abortion as a political wedge issue, even if it means promoting lies," said NARAL Pro-Choice Texas Exec­utive Director Aimee Arrambide. "Its true intent is to intimidate abortion providers, interfere in the patient-doctor relationship, and create an even more hostile environment for doctors to provide care in." Protesters outside the Austin federal courthouse at the beginning of the successful legal fight to overturn HB 2 (Photo by Jana Birchum)
“The kinds of restrictions and obstacles that politicians ... place on women are actually contributing to women having abortions later in pregnancy.” – Dr. Kari White

Despite strenuous efforts to stigmatize and criminalize later abortions, Texas Repub­licans' gamut of anti-choice laws has effectively increased their frequency. The UT-based Texas Policy Evaluation Project (TxPEP), which documents the often negative impact of Texas abortion laws, released a study this week showing that 2013's HB 2 has (as intended) hindered women's ability to seek abortion care – and thus increased the number of second-trimester abortions. The various provisions of HB 2, some of which have since been invalidated by the U.S. Supreme Court, led to the closing of about half of Texas' abortion clinics. With fewer providers, increased distances, and longer wait times, second-trimester abortions increased 13% even as total abortions declined by 18%. Women received abortion care one week later, on average, after HB 2 took effect. "Those who support reducing the number of later abortions should also support eliminating these unnecessary and burdensome restrictions," said TxPEP researcher Dr. Daniel Grossman.

Abortion in the second trimester is generally safe, but the risk of complications (and increased costs) grows in later stages of pregnancy, says Dr. Kari White, a health care professor and study researcher. "The kinds of restrictions and obstacles that politicians who oppose abortion place on women are actually contributing to women having abortions later in pregnancy," White tells us. "That shows that these laws are not concerned with the health and safety of women and their families."