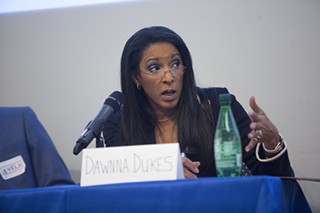 Former Austin state Rep. Dawnna Dukes has found herself once again outside the bounds of the state's ethics rules. The Texas Ethics Commission is suing Dukes for failing to timely file a semiannual financial statement that was due last July, instead turning in the report this past January. The TEC seeks to collect the statutory maximum $10,000 in fines; if that cap didn't apply, Dukes would be liable for more, as the reporting rules levy $500 for missing the first deadline and a subsequent $100 for each day the report remains delinquent. Dukes is far from the only officeholder (or former one) who owes TEC; its delinquent filer list is lengthy and shows other candidates and representatives need to pay anywhere from $500 to $20,000.

It's been a rough road for Dukes, who was ensnared in a series of ethics and financial complaints that led to criminal charges for abuse of office. Though those charges were later dropped, the 12-term Eastside incumbent lost her seat in the March 2018 primary and has laid low since, only coming up to file a lawsuit against the Austin American-Statesman, Travis County District Attorney Margaret Moore, and three of her former aides (who were witnesses in the criminal case) for some $7.8 million in compensatory damages for "conspiring" to defame her. Dukes, who is not an attorney, has represented herself in the suit; according to the Statesman, she has not paid for the suit to be served to the defendants, and it thus remains pending.