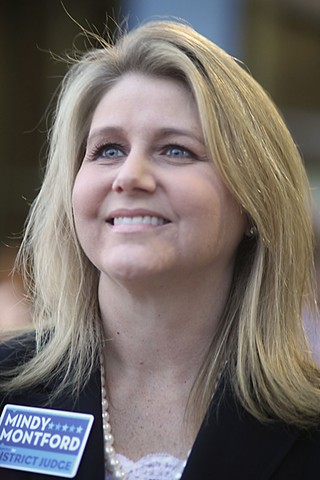 Borchardt, who says she was strangled, kidnapped, and violently raped repeatedly over several days in January 2018, joined the class action suit in August. She's one of eight local survivors accusing the defendants of failing to provide equal protection for female survivors of rape and, ultimately, violating their rights under the Fourth and Fifth Amendments. In December, U.S. District Judge Lee Yeakel heard the defendants' motions to dismiss, but has not yet ruled on the case.

In May 2018, Austin police informed Borchardt that Mont­ford refused to proceed because the alleged rapists claimed the sex was consensual. Borchardt subsequently gave a two-hour formal statement, which was taped, to Austin police in which (according to the filing) she recounted that she had not consented, had attempted to resist, and – upon learning that one of the rapists had been imprisoned for murder – lived in fear she would be killed. However, the D.A.'s Office again declined to prosecute, and Borchardt's friends and family began reaching out to local officials, including Montford, seeking answers.

Monday's filing alleges that "on or about" Sept. 14, 2018, Montford returned a call to one of Borchardt's friends – Dawn McCracken, who is also Montford's former sister-in-law – and "repeatedly made knowing false statements" that Borchardt "admitted" the rapes were consensual, had provided a written statement to APD confirming this, was relieved prosecution was declined, and "did not want her family to learn the 'truth' about the rapes." Montford is also accused of violating Borchardt's privacy and confidentiality, as she provided intimate and confidential – "albeit false" – details about Bor­chardt's case, including the location of the crimes, the number of rapists, details of the assaults, and alleged statements made by the rapists, by other witnesses, and by Borchardt without her consent.

McCracken taped this call without informing Montford (which is legal in Texas) and provided the recording to Borch­ardt and her lawyer, Jennifer Ecklund, from which – according to Moore in a statement issued Tuesday, March 5 – it leaked to the media and then back to the D.A.'s Office. In her statement, Moore claims that "the allegations of impropriety are unfounded" and says, "I realize that Ms. Borchardt and her family are deeply traumatized and in much pain, [but] Ms. Montford believed she was providing information to Ms. Borchardt through an intermediary acting on [her] behalf."

Ecklund did not find Moore's response persuasive, saying that the fact that the D.A. "does not see anything improper about discussing the sensitive details of a rape victim's assaults or about lying and undermining her trauma to the victim's friends and family is appalling. It's also further proof that the women of Travis County are being discriminated against and being denied justice by the people obligated to protect them."

In addition to depositions, Borchardt – who currently lives in Corpus Christi – is asking for any information in the D.A.'s Office about her case; phone logs from Montford, Moore, and Shea from January 2018 to now; and D.A. policies, procedures, protocols, or training materials regarding communications with APD or others about adult sexual assault cases and survivors, including confidentiality obligations.