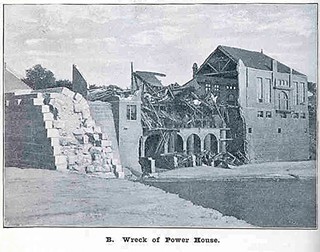 The first Austin Dam not only contained the Colorado but provided electricity (from this powerhouse) to light the moonlight towers – until its catastrophic collapse in 1900.

Austin has flash floods, which are a near-constant but to which Austin continues to adapt rather well; the emerging specter of wildfire disaster, which has luckily only happened at a large scale once, in 2011; and the occasional tornado threat. Beyond that, we've told ourselves and the world that we're disaster-free. But what if? How resilient will we be if we face a catastrophe worse than the stench of zebra mussels in our water? Let's look at some nightmare scenarios. 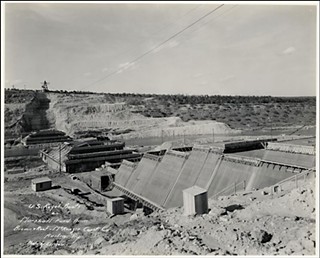 Mansfield Dam, which forms Lake Travis, was completed in 1941. The aging dam's failure would lead to "the potential loss of life in the thousands and the large-scale destruction of Central Austin."

What if this "blueberry in the tomato soup" business (yes, we're stuck with this nonsensical metaphor) gets real, and a left-leaning Austin is threatened by MAGA militias that want to squash that little fruit? Or what if we make the big time, so to speak, as a terrorist target, as we feared we might be this time last year? Or what if we have riots in the streets spurred by tankies a little more formidable than our current crew of Red Guards and Defend Our Hoodz? The city of Austin's emergency operations plan considers both unrest and the distinct threat of a mass-casualty terrorist attack as "moderate" risks, prioritizing keeping evacuation routes clear and moving but teeing up a "state of emergency" declaration, which is the governor's call – so, sending in the National Guard.

"The spread of infectious diseases, or pandemic diseases, can easily reach Austin and the surrounding area," reads the emergency plan. "With Austin being a global tourist destination, people from all over the world are coming and going on a daily basis." (Hello, SXSW!) We also face the threat of a widespread health crisis being caused by a biological weapon attack or by hazardous materials released into our air or – and this brings us back to zebra mussels – our water, which is also a high-potential vector for a pandemic illness. "We just have that one water supply," notes Mayor Steve Adler, pointing to the city's new Water Forward plan's call to diversify our sources. The emergency plan convenes local hospitals and public health authorities to "manage all issues or events involving communicable diseases or biological agents," as well as coordinate safe food and drinking water supplies.

Speaking of that one water supply, the Highland Lakes are impounded by a dam system that's now 80 years old, and its failure would not be pretty. If Tom Miller Dam on Lake Austin broke – as did its predecessor Austin Dam (on what was then called Lake McDon­ald) in 1900, killing dozens, the impact would be fairly contained to the waterfronts of Lady Bird Lake and the downstream Colorado River, though we'd still be looking at hundreds of millions in property damage. But if Mansfield Dam on Lake Travis broke, we'd be looking at "the potential loss of life in the thousands and the large-scale destruction of Central Austin," according to researchers who looked at this last year (after our boil-water event) for, of all people, the LawnStarter.com irrigation app. Their write-up includes such fun figures as "1.1 million cubic feet per second" of water rushing out of the lake, for hours, with a wave hitting Downtown at 50 miles per hour and flooding both sides of the river as far as 12th and Airport to the north and the actual airport to the south. Luckily, the emergency operations plan considers this a "low" risk scenario – but it's in there.

We're already seeing climate-driven impacts on Austin's resilience, and "global warming" does not inherently mean hot weather. But certainly, Austin is likely becoming more susceptible to more frequent and more deadly heat waves. The city's emergency team considers this also to be a low-risk but real catastrophe, even though our summer heat and recurrent drought are considered "normal" conditions of Central Texas. Heat waves have killed hundreds already in cities where air conditioning is less prevalent (Chicago in 1995, London in both 2013 and 2018) and are exacerbated by urban air pollution, which Austin has made strides in slowing but has not stopped.