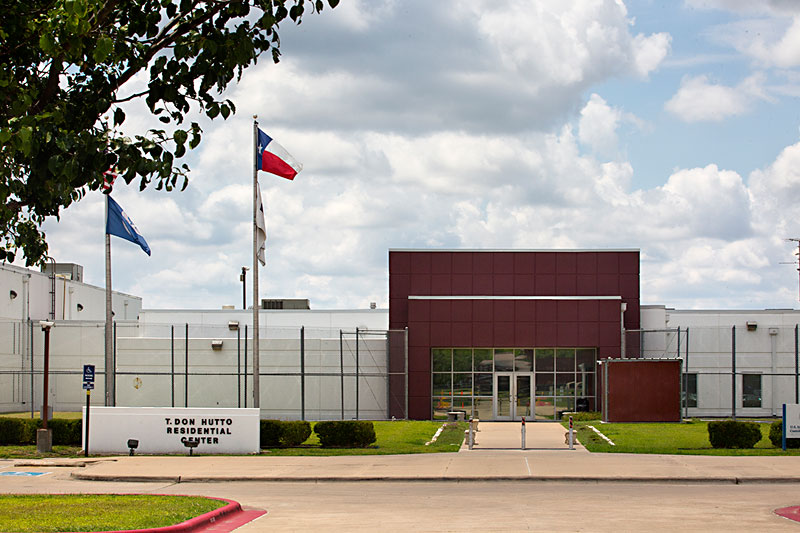 After mounting public pressure and several allegations of sexual abuse, Williamson County commissioners ended the county's contract with T. Don Hutto Detention Center in June, marking a significant shift in government support of the troubled immigration jail ("Williamson County Commissioners Court Ends Hutto Contract," June 26, 2018). However, while the contract expired at the end of January, the Taylor facility remains open, sparking protest from immigration advocates, who gathered earlier this month at a Taylor City Council meeting to voice their disapproval.

The center, which holds roughly 500 mostly asylum-seeking women, is now run through a direct "short-term" contract extension between U.S. Immigration and Customs Enforcement (ICE) and private prison operator CoreCivic, says ICE spokesperson Nina Pruneda. Bethany Carson of immigrant rights advocacy group Grassroots Leadership questions the process, noting that it appears there was no competitive bidding involved, including a request for proposals, as is standard with federal contracts. There is also no clarity on the length of the temporary contract. "It's very unclear what this contract extension means," says Carson. "We still have a lot of questions about how this facility remains open."

When the Chronicle asked about the duration of the contract and if there was an RFP bidding process, Pruneda replied, "That's all the information we are providing," following her one-sentence confirmation of the short-term contract.

The Taylor Police Department has entered into a security agreement with ICE for the T. Don Hutto facility, a memo of understanding that transpired the same month the county allowed its contract to expire, according to open records obtained by Grassroots. Under it, the department will help Hutto with escapees and provide emergency backup for disturbances. Email exchanges show CoreCivic giving the Taylor police chief the heads-up on public protests related to Hutto, including a rally to support sexual abuse survivor Laura Monterrosa ("ICE Retaliates Against Hutto Detainee?," Feb. 16, 2018). "This is pretty solidly a federal job, so why would Taylor PD want to be involved in a federal contract that puts them in the role of federal immigration enforcement?" asks Carson.

The open records request also revealed a letter written by Taylor PD Chief Henry Fluck that offered CoreCivic glowing praise and declined a gift card given by the profitable private prison company. "I am very grateful for the gift card you sent me," writes Fluck. "However, I am unable to accept it. As you know, it is the kind thoughts and actions that are ultimately the most important and I truly appreciate yours."