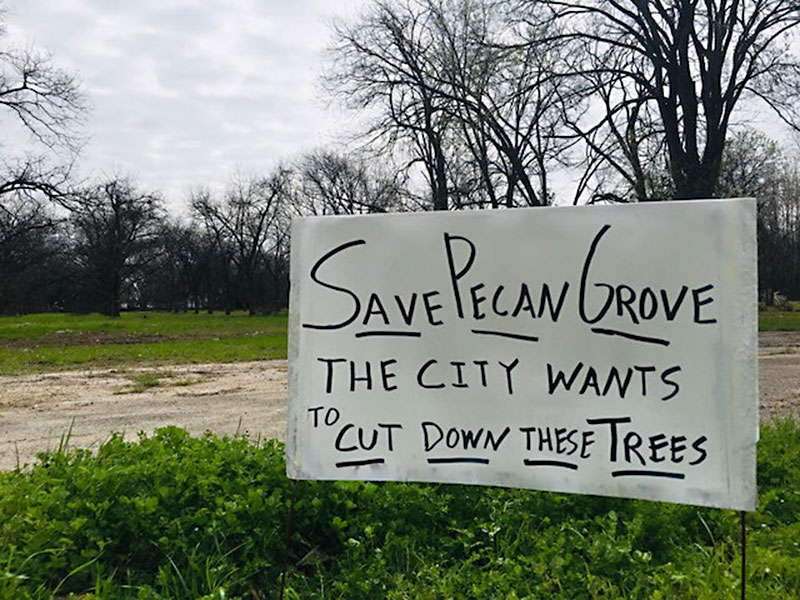 On Jan. 17, the city Planning and Zoning Department notified neighbors of an upcoming Historic Landmark Commission hearing on a demolition permit for a long-vacant house on city-owned property at 1131 Tillery St. – a "one-story, rectangular-plan, hipped-roof-stone-veneered cottage" once the residence of Rudy and Pearl Henninger, who also sold flowers they grew on the 5-acre tract. Historic preservation staff had already concluded the house did not merit preservation, and intended to recommend the HLC only request additional documentation before releasing the permit.*[See correction below.]

There was one problem: The Henninger house had already been demolished on Dec. 13, shortly after the permit application had been filed and long before it was approved. Project coordinator Javier Delgado, overseeing the city's redevelopment of the property for affordable housing, confirmed this week that the contractor had jumped the process without informing him. (Note: Delgado subsequently clarified that he had approved the demolition upon the contractor's assurance of having the permit.) "From now on," Delgado said, "I need to see the approved permit in hand before they move forward."

His­tor­ic Preservation Officer Steve Sadow­sky said he discovered the screwup before the scheduled Jan. 28 hearing from a neighbor who found a notice mistakenly posted at his house. Sadowsky says he had an unsatisfactory follow-up conversation with the contractor, concluding, "The bottom line is that they demolished the house without a permit to do so."

Govalle residents were both surprised and dismayed by the abrupt destruction, and now share another worry – that the neatly arrayed grove of roughly 75 mature, producing pecan trees behind the house site will soon go the way of the Henninger house, perhaps without warning. Jessica Eley, co-chair of the Govalle Neighborhood Association, told the Chron­icle that neighbors have been lobbying for a "Pecan Grove" park on the site for some time, but that the city's Austin Housing Finance Corporation, which acquired the property through foreclosure years ago, remains uninterested and is planning a sizable affordable housing project.

"The pecan trees are mature and produce almost every fall," Eley wrote in an email. "Current and former residents often go there to pick pecans for personal use. Those living on the margins will go and pick pecans to sell. It's a treasured neighborhood asset." A tree survey by city arborists concluded that only four of the trees meet the "heritage" preservation standard. Eley added that neighbors strongly support affordable housing nearby – the Guadalupe Neighborhood Development Corp­or­a­tion's Jeremiah Proj­ect and Integral Care's Housing First Oak Springs project are both readily visible from the Tillery site. "We would even support affordable development around the pecan grove. But in a neighborhood known for its farms and its rich soil, we're ready to fight to save the pecan grove."

Considering Austin's urgent need for affordable housing, it's a "good vs. good" conflict, and the outcome is uncertain. Council Mem­ber Pio Renteria, whose District 3 includes Govalle, said he regrets the city's failure of oversight – "some retraining will take place" – but that the tract represents a prime opportunity for a large number of "deeply affordable" housing units, likely taking precedence over saving the trees. "I know the neighbors would like to turn it into parkland," Renteria said, "but I just don't see that happening." He added that it will be months before any precise development plans take shape.

In the wake of the surprise demolition, the neighbors worry that one morning they'll find that the tract has been clear-cut. "Trust has been eroded," said Eley. Delgado got an earful at a Feb. 9 Govalle NA meeting, and insists that the neighbors will be kept informed as plans move forward – which hasn't happened yet. "For the neighbors, I've put my name on this [project]," Delgado told me, "and as decisions are made they will be in the loop, with open communication."

*Correction: This sentence originally reported, in error, that the Historic Landmark Commission had concluded the house did not merit preservation. City staff intended to make that recommendation to the HLC at its Jan. 28 meeting, which was canceled because the house had already been demolished.