Coexisting With the Coyotes of Travis County 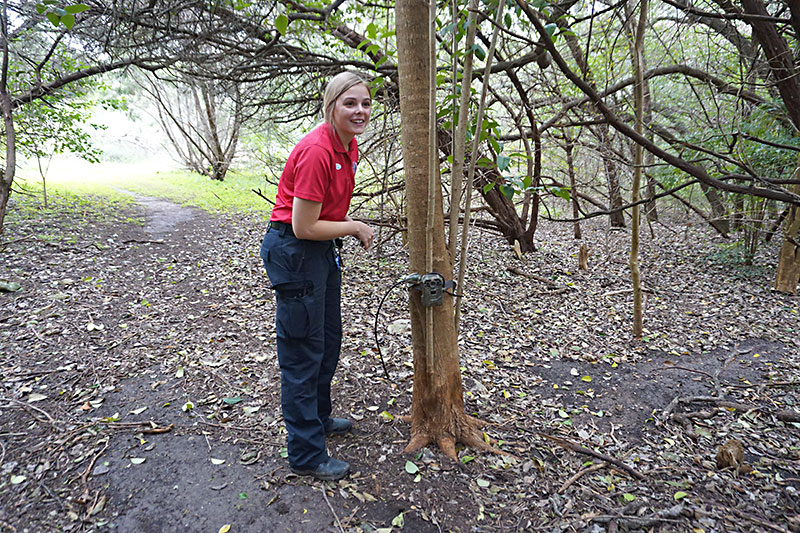 Just over one year ago, there was a coyote showdown of sorts in Travis County. After 13 years of using the controversial Texas Wildlife Services to manage wildlife issues in the county's rural and unincorporated areas, county leaders explored awarding the no-bid annual contract to the city of Austin's Animal Services Office, which had itself parted ways with TWS in 2014. While TWS is part of a federally funded nationwide agency that kills millions of wild animals with poisons and traps every year, largely to appease private agricultural interests, the ASO uses nonlethal techniques to mitigate conflict, in line with the coyote management plan approved by the Austin City Council in 2014.

What followed was a pitting of animal-revering progressives against more traditional ranching-minded folks, and ultimately a majority of the Travis County Com­mis­sion­ers Court wanted the city to take over. The December 2017 decision wasn't unanimous, however, with liberal County Judge Sarah Eckhardt and conservative Commis­sioner Gerald Daugherty voting to use both TWS and the city, for a doubled price tag.

“While not everyone likes the idea of coyotes and other wildlife living near them, residents seem to feel better after learning about the animals’ habits and behaviors and how humans need to respond.” – Travis County spokesman Hector Nieto

At the time, Eckhardt voiced concern that the commissioners on the other side of the issue – Brigid Shea, Jeff Travillion, and Margaret Gómez – were ignoring the county's agricultural community, which sometimes loses livestock to predators, and that a management-predominant methodology could lead to a situation "where people in outlying areas don't feel the response is adequate to address their concerns and will take matters into their own hands." She ended by saying she would discuss the issue and the pending ASO program with small-city managers who were still relying on the county's TWS partnership for coyote control. (The city ASO already provided some wildlife-related services throughout the entire county, such as rabies control.)

Since ASO extended its city coyote program throughout the county in January 2018, it's been a relatively quiet year. Hector Nieto, Travis County's public information officer, responded to questions sent to Eckhardt, saying she has had no indication of safety issues and that the county is currently satisfied with ASO's level and type of response. "While not everyone likes the idea of coyotes and other wildlife living near them," Nieto says, "residents seem to feel better after learning about the animals' habits and behaviors and how humans need to respond. We are not aware of any complaints regarding responsiveness."

When asked about the results of Eckhardt's discussion with small-city managers, Nieto provided no specific information but said such conversations occur on a regular basis. ASO will speak at a work session of the Commissioners Court on Feb. 28 to update Eckhardt and her colleagues on its coyote and wildlife efforts.

According to ASO, the general wildlife concerns reported by residents outside the city have been fewer than those of Austinites. ASO's monthly reports to Travis County show that most calls involve sightings of raccoons, possums, injured squirrels, porcupines, foxes, skunks, and many injured birds, as well as encounters with snakes and bats.

During the first 11 months of the county program, ASO received reports of about 45 coyote sightings, six encounters (a coyote non-aggressively following or approaching a person or pet), and three incidents (coyotes being aggressive with no contact, or the caller believing a coyote injured or killed a pet). There was one investigation of an animal's possible exposure to a potentially rabid coyote that ended with that animal being released from quarantine.

ASO Communications Manager Jennifer Olohan says the highest level of response has consisted of officers patrolling an area – sometimes called a yard audit – and teaching citizens to haze, or scare, coyotes by making a lot of noise, making themselves appear larger, and behaving "to help reinstill a natural wariness of humans," as explained in ASO's outreach materials. "The more often an individual coyote is hazed using a variety of tools and techniques by a variety of people, the more effective it will be. ... Hazing should be exaggerated, assertive, and consistent. You may feel silly but you will be helping people, pets, and wildlife peacefully coexist."

Olohan says, "County residents understand that they are in the coyote's space. It is really important that Austin and Travis County residents understand we have to change our behavior in order to coexist with coyotes and other wildlife. Most of the time, it is easy to mitigate conflicts by removing attractants like food and water and practicing the best pet safety actions with your pets."

ASO staff have focused on educating people in the outlying areas about coyote ecology, attractants, and hazing. When Sarah Whitson joined ASO as the wildlife officer serving the county, she began spreading the word about the program and teaching nonlethal strategies, like throwing an ammonia-soaked rag at a skunk to get it to leave a property. During her first several months, Whitson was busy reaching out to dozens of community centers, libraries, and homeowners associations in Travis County, as well as with sheriff's deputies, who sometimes respond to animal-related 911 calls.

People in the county "see wildlife all the time," she explains, "so when they see it they don't think about reporting it. What I tried to stress out there is that if there's any, say, coyotes coming up on your property or they're acting in a way that is concerning, I want people to know that there is a number to call so that we can assist, and basically just to monitor the behavior." 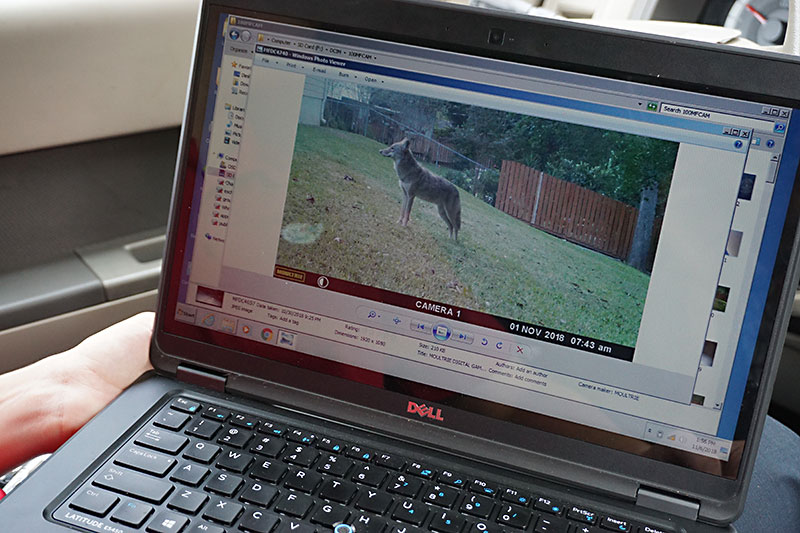 Game cameras allow ASO to track coyote activity over time. (Photo by Lindsay Stafford Mader)
Sometimes, Whitson will dig through coyote scat to see what the animal has been eating (hint: snails and bird seed).

Whitson, who has a degree in wildlife biology from Texas Tech, typically responds to reports of repeat sightings or concerning behavior by inspecting a caller's property for coyote attractants and, if needed, setting up game cameras that capture images of any coyotes, letting her track their activity and connect it to times of day and other factors. A diligent investigator, sometimes she'll dig through coyote scat to see what the animal has been eating (hint: snails and bird seed).

Whitson recently let me join her for a day of coyote field work, though all of it was within Austin city limits due to a lack of activity in the outlying county at the time. We visited a Southeast Austin apartment complex near the county line, where somebody had been leaving food out for coyotes that live in an adjacent preserve. Whitson has a smart empathy for both the animals and the people who become involved with them. "You have to understand why [the neighbor] is doing it – because she enjoys it. But if she truly enjoyed it, she wouldn't do it because of the negative impact that it creates. A fed coyote is a dead coyote. So if I could just relay that message in a successful way, I think the feeding will stop."

Whitson says she hasn't had much communication with farmers or ranchers, probably because they deal with coyote problems on their own – a dynamic that I found to be true when speaking with Travis County ranchers, only one of whom had actually used Texas Wildlife Services to trap or poison animals when they were still working with the county. "As the program continues, if we get a long-term budget for it, I want the next person to focus on getting the word out to ranchers that we can assist and provide information." She says she'd be happy to set up game cameras for them (about seven game cameras were set up in the county during the program's first year) and would recommend agricultural-focused deterrents like motion-activated predator lights that scare off coyotes, raccoons, and birds of prey.

One kink of ASO's county program is that Travis County residents outside Austin's jurisdiction cannot simply call 311; they have to dial 512/974-2000 to get help with coyote and wildlife issues. Also, when I submitted a public information request for coyote call records from unincorporated county residents, the city's legal department told me that "calls that are not validated as Austin jurisdictions are transferred to the county sheriff department that is responsible." (The city of Austin includes parts of three counties – Travis, Williamson, and Hays.) ASO, however, says this is incorrect – that it does indeed receive service calls from residents in outlying Travis County – and that it has addressed this with 311 (run by the city Code Department) to clear up any confusion. 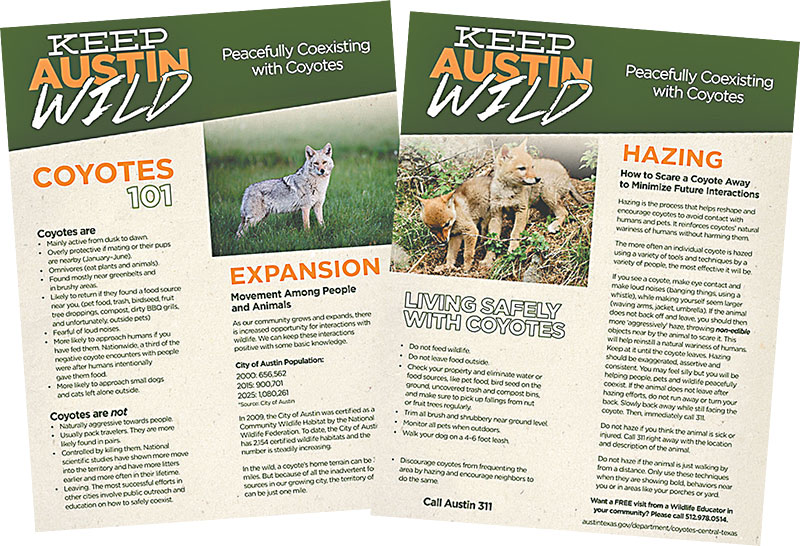 The ASO tries to teach neighbors to "haze" coyotes so they'll spend their time elsewhere.

Though the county's contract with the city began in January 2018, it took ASO until April to find and hire Whitson. And, while the contract states that ASO will provide services to the unincorporated areas of Travis County "through a dedicated 40-hour per week" employee, Whitson started additionally handling the city's wildlife work in August due to staffing changes, and she then spent the majority of her time responding to city calls because that demand was greater. ASO, which hired an additional dedicated county wildlife officer last month, says that because the contract with Travis County allows for just a temporary position, it has been a challenge to find someone with the needed experience and knowledge.

While ASO says adjustments weren't made on the invoice to Travis County because it was still handling county work, the county's Health & Human Services Department, which oversees the wildlife contract, says it received no invoices for all of 2018.

Because of the staffing changes and lack of invoices, it's impossible to say how many hours ASO officers are spending on county work – and therefore what the county is getting for its money. This was also an area of concern with the prior contract, when TWS appeared to be working just a few hours a week in Travis County for what amounted to more than $100 an hour. ASO also says there have been no efforts or plans to reach out to farmers and ranchers because "residents must call 311 in order for us to have their information," though it has done a commendable job of reaching out to other county communities and could easily connect with agricultural interests through farmers' markets and feed stores.

Some have criticized ASO in the past for not having a formal partner for removing problematic coyotes. Though this remains the case, ASO says it can remove a coyote if it poses a threat to public safety using an urban wildlife biologist or Texas A&M AgriLife Extension wildlife specialist. Additionally, in situations where coyotes are becoming less afraid of human activity during daytime hours, ASO can do "hard hazing" using paintball guns, a strategy used by other communities in the United States. To date, ASO says it hasn't needed to remove a coyote in the city or in Travis County.

A version of this article appeared in print on February 22, 2019 with the headline: Coyote Cooldown