Defend Our Hoodz Gets Mixed Up With Arts District, Presidium, Chronicle 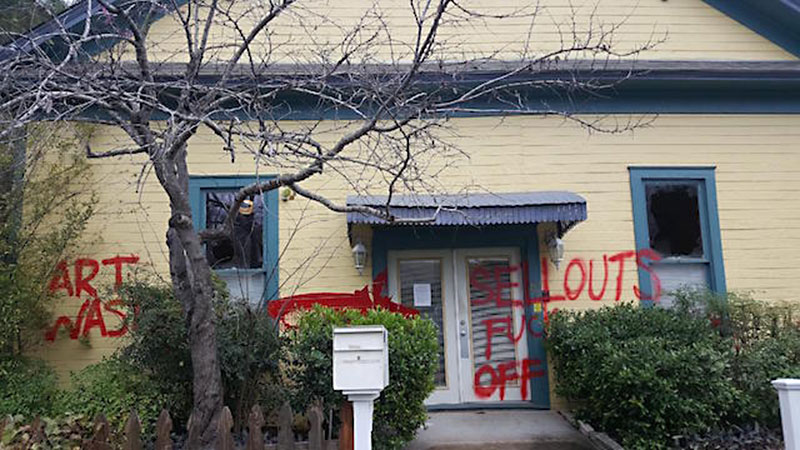 Last Friday morning, Feb. 8, about 3am, a small group of people vandalized the offices of Jim Hightower on San Marcos Street. They threw rocks through two windows and spray-painted slogans – "Art Wash" and "Sellouts Fuck Off" – across the front wall. The assault appears to have been directed at Austin Creative Alliance, whose offices are in the same building, and which is partnering with Presidium Holdings to sponsor an Arts District at part of the major Presidium development planned for the East Riverside corridor.

The attack on the building was associated with "Defend Our Hoodz," a "revolutionary" anti-gentrification cadre, but DOH denies responsibility. Instead, on its Facebook page, the group "applaud[ed] the hood for defending itself from greedy sellouts," while condemning the Chronicle and other media for implying any connection. Hightower staff reported that their actual neighbors came and helped with the cleanup – by Monday, the broken windows were boarded up and awaiting more permanent repairs.

Staff members were stoical but a bit edgy about brick-sized rocks landing near their work stations, even in the middle of the night. (They also cited Hightower's own newsletters criticizing gentrification.) Laura Ehrlich, executive director of High­tow­er and Associates, said, "We support anti-gentrification efforts, but not tactics that destroy property, and damage small nonprofits that are doing good in the world."

Contacted via Facebook, Defend Our Hoodz responded via email, saying they have "nothing to say" to the Chronicle, "a capitalist, racist publication that has published lies and conjectures to aid in the vilification of the anti-gentrification movement. You published a headline that literally accuses our group of something we didn't do." They went on to defend whoever did do the vandalism as "their right," adding, "Spray paint and vandalism are nothing compared to what developers, landlords, and privileged invaders who are taking over working-class neighborhoods do every day."

On Thursday evening, a few hours earlier, an art installation by Jean-Pierre Verdijo – "Agency at the Crossroads" – opened in the ACA gallery, and a couple dozen DOH members attended (at Verdijo's invitation). The installation, painted and constructed on the gallery walls, is in part a meditation on the effects and meaning of "gentrification" on Eastside neighborhoods. Verdijo said that he tried to engage the protesters in conversation, but they generally just yelled and denounced him (including through a bullhorn in the small gallery).

"I'm hoping to start a dialogue, a conversation," said Verdijo, "and for that to happen, all sides need to take part." "Agency at the Crossroads," Verdijo says, is conceived as a two-year project in various media, attempting to understand and document the neighborhoods and people under pressure from change and redevelopment. "My work is to study this," he said. "Gentrification, how the arts affect it and are affected by it, and to try to find solutions."

Verdijo said that the protesters demanded he join a boycott of the proposed Arts District and the Presidium development. "They insulted the art, and that's fine," he said. "I didn't really take offense. ... In some way, maybe we have started a conversation."

On its Facebook page, DOH denounced Verdijo and the ACA as "gentrifier collaborators," and wrote, "Jean-Pierre invited us to have a 'conversation' about gentrification at his exhibit, but we came to shut it down instead."

Other than the noisy confrontation, the opening was uneventful. But early Friday morning, three people wearing hoods like those worn in the earlier protest were recorded on a security camera vandalizing the building. They threw rocks through the windows, and spray-painted the slogans across the building's front. ACA and Hightower staff have documented the damage, and police are investigating.

It's not the first run-in the ACA has had with Defend Our Hoodz. At a November festival on South Pleasant Valley to celebrate the initiation of the Arts District, DOH protesters leafletted the artists demanding they boycott the event, and a group surrounded and assaulted Larry Sunderland, a neighborhood participant. One man was arrested for "injury to an elderly person" and another was charged – those cases are pending. DOH blames Sunderland for the altercation.

ACA Executive Director John Riedie said, "It's a real shame that these folks won't dialogue, because I think we share a lot of the same values."