Abbott leaves the red-state red-meat back at the mansion 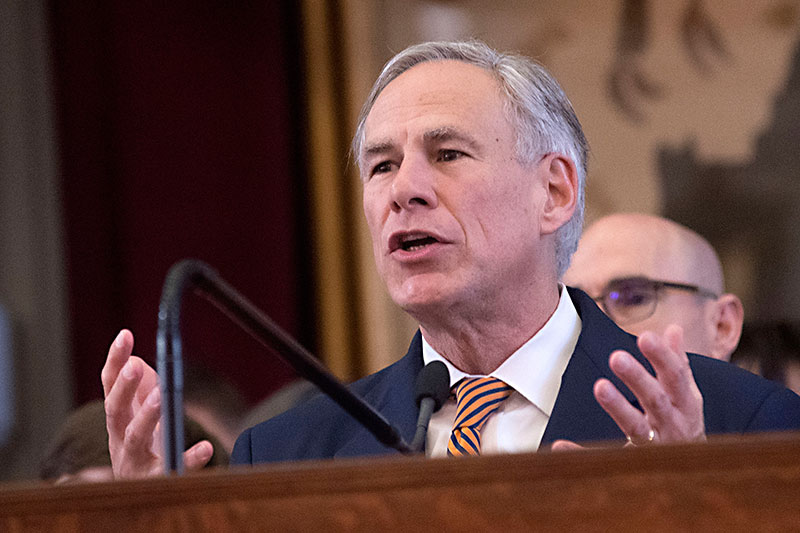 In his third State of the State address to the combined House and Senate on Tuesday, Feb. 5, Gov. Greg Abbott named school finance, increasing teacher pay, property tax "reform," school safety, and (evoking Hur­ri­cane Harvey) disaster relief among his top "emergency items" for the 86th Texas Legis­lature, allowing those priorities to get on the fast track and not wait for 60 days (as the state constitution requires) for bills to be passed. Noticeably absent from Abbott's list were the red-meat, red-state issues that have occupied him in the past – no mention of abortion, for example, and very little about immigration.

Instead, the governor is thinking of the children; less than 40% of students who took the SAT or ACT were prepared for college, said Abbott, calling for school finance reform that includes paying teachers more and earning an ovation from both sides of the aisle. "We must provide incentives to put effective teachers in the schools and classrooms where they are needed the most, and we must create a pathway for the best teachers to earn a six-figure salary," he said.

Along with his plan for 2.5% revenue growth caps on local government that can only be exceeded by voter approval, Abbott suggested granting people the power to fire their local tax appraisers: "We can no longer sit idly by while property owners are reduced to tenants of their own property with taxing authorities playing the role of landlord."

Without wading deeply into anti-immigrant sentiment, Abbott called for fully funding the state's border security program because "the federal government still has not fulfilled its responsibility." (Both chambers have asked for about $800 million on border security for the next two years.) He called for added funding to tackle human trafficking, create anti-gang centers in Waco and Tyler, and to "right the wrong" of leaving untested rape kits dormant on shelves. In light of the "horrific" mass shooting at Santa Fe High School, Abbott said we must make school safety a priority, but did not mention rules to restrict access to firearms, which he had briefly floated last year after the massacre. "When it comes to improving school safety, one solution everyone agreed on was the need to address mental health in our schools," said Abbott.

Following the address, House and Senate Democrats huddled in the Speaker's Com­mit­tee Room for a rebuttal. While they applauded a bipartisan effort to fix the broken school system, they expressed uncertainty and skepticism over the school finance plan, especially in the event of a restrictive 2.5% property tax cap. Freshman Sen. Beverly Powell, D-Ft. Worth, took a stand for local control – an inevitable tug-of-war this session – saying "local decisions should be made at the local level, not decided upon in just Austin."

The Dems also noted a few glaring omissions from Abbott's speech, among them Texas' sorry distinction as the least-insured state; health care was barely mentioned at all. "Black women are dying at alarming rates," said Rep. Toni Rose, D-Dallas, alluding to the state's staggering maternal mortality rate. "We need to expand Medicaid."

Abbott also gave a wide berth to the issue dominating the week's headlines, the "voter fraud" debacle spawned by his own Secre­tary of State – but Dems did not. "The SoS partook in an organized illegal attempt to purge Latinos from voter rolls," said Austin Rep. Celia Israel, who is pushing legislation to create an online voter registration system.

In total, though, Dems felt the speech struck an atypically mellow tone, a likely reflection of the GOP's mixed-at-best results in the November midterms. "It certainly was a different speech than we heard two years ago," said Rep. Chris Turner, D-Grand Prairie, head of the lower chamber's Democratic Caucus. "It seems as though election results have consequences."

Elsewhere at the Capitol ...

Supporting Survivors of Sexual Assault: During a Monday, Feb. 4, press conference, Sen. Kirk Watson, D-Austin, announced the filing of 20 bills hoping to move the needle in how the state and its universities address rape cases. Among Watson's proposals are an extra $7.5 million to support rape crisis centers, and establishing "Texas IX" – similar to federal Title IX offices – on all college campuses, both public and private, in the state. Across the aisle, Sen. Jane Nelson, R-Flower Mound, chair of the Senate Finance Committee (on which Watson also serves), has a bill to establish a statewide telehealth center for sexual assault forensic exams (helpful for survivors in rural parts of the state with limited access). Nelson's counterpart in the House, Appropriations Chair John Zerwas, R-Richmond, is backing a budget provision directing the state auditor to develop a plan to "comprehensively examine" rape investigations and prosecutions in Austin, Dallas, Houston, San Antonio, and El Paso over the last five years – similar to the Austin City Council resolution passed last week. Joining Watson at the Capitol Monday was Texas Association Against Sexual Assault CEO Rose Luna, who said that during her 16 years in advocacy, while lawmakers have taken action on both domestic violence and child sexual assault, this is a new level of focus on adult survivors, even though two in five Texas women (and one in five men) will be victims of sexual violence in their lifetimes.

Giving Bail the Boot: In the wake of the successful federal lawsuit in Harris County to eliminate cash bail, the top criminal justice leaders in the Lege – Sen. John Whitmire, D-Houston, and Rep. Andrew Murr, R-Junc­tion – have filed identical bills to reform the system statewide, including adopting validated risk-assessment tools and requiring magistrates to set the least restrictive conditions on pretrial releases. While the bills don't dispense with cash entirely, as California did last year, there's support from both parties and the state's highest courts for substantial enough changes to (in Whit­mire's view) avert an inevitable collision with the feds. Similar legislation failed in 2017 after a spirited lobbying blitz by the bail bond industry.