A long way to go, but public opinion trends toward legislative action

Report card season is upon us and, according to the Human Rights Campaign, Texas still has a long way to go when it comes to queer and transgender rights. On Thursday, Jan. 31, the educational branch of the national LGBTQ civil rights organization released its fifth annual State Equality Index, on which Texas – as one of the 30 states where people can still be fired, evicted, or denied services for being queer – finds itself called out as a "high priority" for change.

The report notes Texas continues to restrict schools from teaching LGBTQ topics, excludes transgender health care from Medicaid coverage, does not include gender identity in its hate-crime laws, and still allows therapists to offer "conversion" therapy for queer children – the latter the target of a current bill filed by Rep. Celia Israel, D-Austin. (During a Tuesday, Feb. 5, press conference of the new LGBTQ Legislative Caucus, Israel called the practice "unconscionable.") The HRC report identifies a whopping three pro-equality bills adopted into Texas law over the last 15 years.

But a month into the current session, another report from Public Religion Research Institute – also released Thursday, Jan. 31 – finds that 64% of all Texans oppose LGBTQ discrimination. (That compares to 70% for the nation as a whole.) The PRRI survey of 3,000 Texans found support for equal protection laws such as those filed this session by Sen. José Rodríguez, D-El Paso (Senate Bill 151), Rep. Jessica Farrar, D-Houston (House Bill 244), and Rep. Diego Bernal, D-San Antonio (HB 254). These bills echo the federal Equality Act, first introduced in 2015 and yet to pass, which would amend civil rights laws to include "consistent and explicit non-discrimination protections" for the LGBTQ community in employment, education, housing, and federally funded programs.

Protecting the LGBTQ Community When the State Attacks
From the bathroom bill to marriage equality, can Austin fight back? 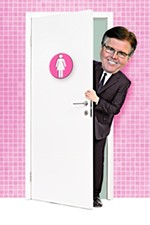 Battle of the Bathroom Bigots
Texas officials are attempting to score points by stoking anti-trans furor. But in Austin, LGBTQ advocates are fighting to enforce protections.