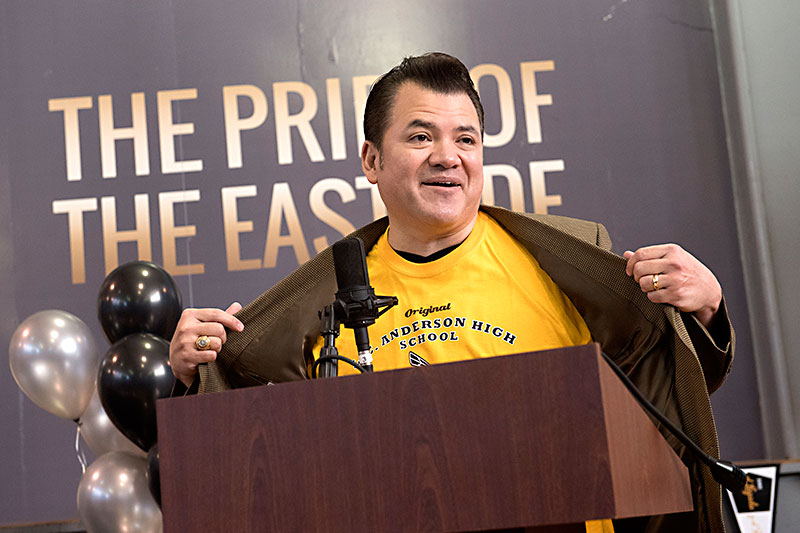 Austin ISD Superintendent Paul Cruz sported original L.C. Anderson High gear as he assured alumni of the pre-integration black school that its legacy was not to be tarnished. The district is moving Eastside Memorial Early College High School to the L.C. Anderson site in East Austin, and then moving the Liberal Arts and Science Academy to the former Johnston High campus, where Eastside is now. See "Austin ISD Begins to Move Eastside High Schools," Jan. 25. (Photo by John Anderson)

PAXTON vs. BDS: Texas Attorney General Ken Paxton has predictably asked federal district judges to deny any motion for a preliminary injunction against Texas' law preventing state-funded companies and their employees from boycotting Israel. Last month, Pflugerville ISD speech pathologist Bahia Amawi and, separately, four others represented by the ACLU sued the state over the anti-boycott law, which they see as an infringement on their First Amendment rights.

Home Prices Steady: According to a report from the Austin Board of Realtors, the median price for single-family homes in Austin increased 4.1% in 2018, to $375,760. Sales were flat at 9,357 homes, but dollar volume increased 5.3% – and monthly housing inventory declined slightly. ABOR reported that the median price for the Austin-Round Rock metro area stayed above $300,000 for 10 consecutive months, a new record.

Feeding the Feds: The Texas AFL-CIO, the Central Labor Council, and local Democratic officials have begun a food drive in support of federal workers harmed by the government shutdown. Bring canned goods and other nonperishable items to the AFL-CIO at 1106 Lavaca during business hours Thursday and Friday, noon to 4pm Saturday and Sunday. The donations will be delivered to the Central Texas Food Bank on Monday.

Downtown Hate Crime? Austin police have confirmed they're investigating an attack on two gay men as a hate crime. The brutal incident occurred Saturday morning in Downtown after the couple left Rain on 4th on Austin's small but mighty "gay strip." See "Qmmunity," Jan. 25, for more.

Tacos and Transit: Capital Metro has launched a new video series that hopes to get Austinites as excited about bus rides as they are about tacos. Taco journalist Mando Rayo discussed the pairing on Tuesday's first episode; next month, AISD Superintendent Paul Cruz will hop a bus for Veracruz. Tune in via Cap Metro's YouTube channel.