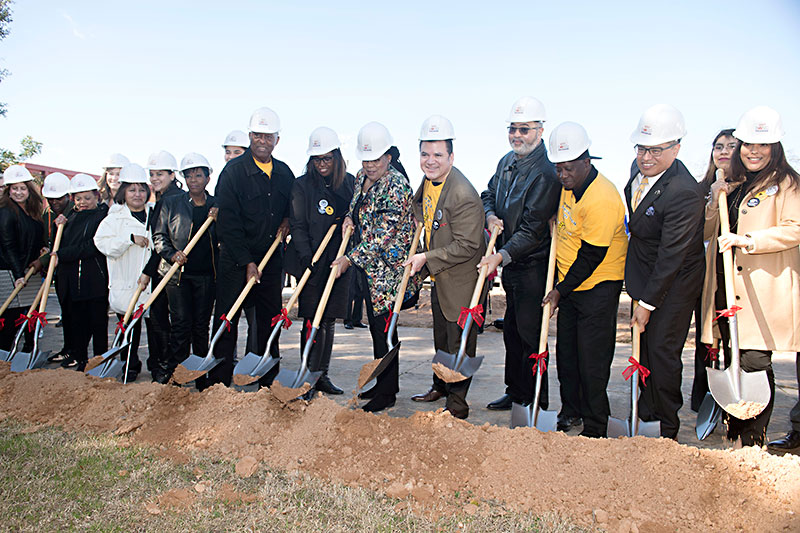 The "Eastside Shuffle" is officially underway at Austin ISD, after a groundbreaking ceremony Saturday at what will be the new home for students at Eastside Memorial Early College High School. Beginning in August 2021, after $80.6 million in upgrades, Eastside Memorial will occupy a modernized campus at the site of the original L.C. Anderson High School on Thompson Street in East Austin.

The shuffle will impact students at three AISD high schools, the outcome of construction projects included in the $1.05 billion bond package approved by voters in November 2017. Currently, students at Eastside Memorial attend school at the former Johnston High School campus in East Austin, but they (along with students in AISD's International High School, which shares space with Eastside) will move to the old Anderson campus – site of the district's pre-integration black high school.

“We care about the future, but we want to make sure that we honor what’s happened in our past and make things right.” – Paul Cruz

Meanwhile, the Liberal Arts and Science Academy (LASA), currently housed at the LBJ Early College High School campus in Northeast Austin, will move to the Johnston campus following a $10.3 million modernization effort there. (That campus may also be renamed before then, as it currently bears the name of Confederate Gen. Albert Sidney Johnston.) District leaders say that the shuffle will allow more students to enroll at both LASA – one of the district's most popular and academically successful schools, although it has come under scrutiny in the past for its selective admission practices – and LBJ, which offers a program that allows students to gain college credit in health sciences courses.

The moves have caused a stir among the district's Eastside communities. While on the board, former District 1 Trustee Ted Gor­don took issue with moving LASA because, he said, moving the LASA magnet school out of LBJ would deprive the district's east and northeast families from having one of AISD's best schools in their backyard. At the same time, alumni of L.C. Anderson High School have expressed concern that the district will fail to honor that school's long legacy as a point of pride in Austin's black community.

"Old Anderson" was opened in 1889 as part of the Robertson Hill School, Austin's first school for black students. After being spun off in 1907, it was named first for E.H. Anderson (founding principal of what is now Prairie View A&M) and then for his brother L.C. Anderson (first principal of the Austin school) upon the latter's death in 1938. Formerly located where Kealing Middle School is now, Old Anderson opened at the Thompson Street location in 1953 but was ordered closed in 1971 as part of the years-long court battle to desegregate Austin schools. The current L.C. Anderson High School in Northwest Austin opened in 1973; that campus' first principal, Charles Akins, now also has an AISD high school named for him.

With district leaders aware of the precarious lines they're walking as they execute the "Eastside Shuffle," it's no surprise that the groundbreaking Saturday was a full-on ceremony, with area elected officials in attendance and a speaker lineup that included AISD Superintendent Paul Cruz, Board of Trustees Vice President Cindy Ander­son, and members of the Original L.C. Ander­son Alumni Association. The program also featured panel conversations with current Eastside Memorial students and L.C. Anderson alumni, spotlighting issues such as "pride," "pain," and "perseverance."

The proceedings and discussions returned often to themes of preservation and of redressing past wrongs to AISD's Eastside communities. "We care about the future, but we want to make sure that we honor what's happened in our past and make things right," Cruz told the audience. "That's what today is about: making things right, and making them right with pride, integrity, and honor."

Several L.C. Anderson alumni interviewed at the ceremony echoed a sense of cautious optimism at how the district will handle the reopening of the school. AISD has applied for state and national historic recognition of the site, and the district has committed to restoring the school's iconic entryway as one way of honoring its legacy. But as Gilbert Jones, class of '69, put it, AISD "has to do more than just preserve the building." He said the school "shaped me and my life" as not just a venue for his education, but also as a community hub for him and his Eastside neighbors. "I want to make sure [AISD] preserves that history for future generations."

Another speaker, Johnnie Mae Coleman Overton, who graduated from L.C. Anderson in 1952, reminded AISD leaders that their handling of the shuffle would be watched closely. "I have a special request for Dr. Cruz, board members, and those from Eastside Memorial, International High School, and the original Anderson alumni," said Overton. "I hope you will remember that a promise made is a promise kept."

A version of this article appeared in print on January 25, 2019 with the headline: Starting to Shuffle