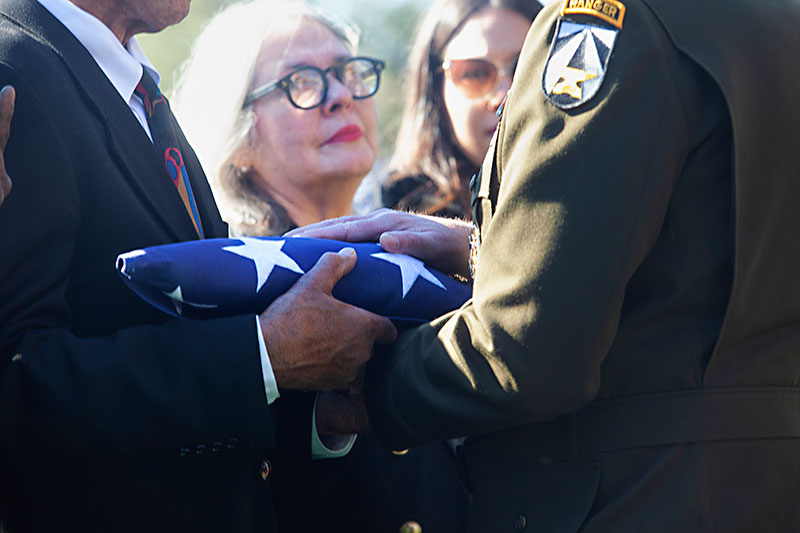 General John Murray, at right, presents the flag that had been draped over Richard Overton's coffin to cousin Volma Overton Jr., representing the large extended family. According to Gov. Greg Abbott, who spoke at Richard Overton's memorial service earlier in the day, the flag flew over the Texas Capitol. The nation's oldest man and oldest living World War II veteran, who died in December at age 112, was laid to rest Saturday, Jan. 12, at the Texas State Cemetery a short distance from his Eastside home, next to the grave of local civil rights pioneer Volma Overton Sr. (Photo by Jana Birchum)

Alexi Lalas Sighted! Mayor Steve Adler declared Tuesday "Austin FC Day" in honor of the new Major League Soccer team to begin play at McKalla Place sometime in 2021 – although there's still that matter of an opposing petition, of curious provenance, determined to put the stadium deal to a public referendum. Now let's start a fight over the word "football" ...

Feds' Free Rides: As of Jan. 16, all federal employees can ride Cap Metro for free until the government shutdown ends. About 13,000 federal employees working in the Austin area will be able to use Cap Metro's bus, MetroRail, and MetroAccess services without charge by showing drivers or fare inspectors their federal government employee ID.

Rape Case Dilemma: The Austin Police Department held a press conference Wednesday afternoon regarding the full audit on the department's rape case clearances from the Texas Depart­ment of Public Safety. See online for a full breakdown.

Death Watch: Stay The state's first execution of the year, scheduled for Jan. 15, has been stayed by the Texas Court of Criminal Appeals. On Monday, the CCA granted Blaine Milam's stay request, citing recent changes in bite mark science and the law surrounding intellectual disability. Robert Jennings is now slated to be the first to die by the state's hand in 2019 on Jan. 30.

Census Question Axed: U.S. District Judge Jesse Furman of New York has ordered the Trump administration to not ask about citizenship status in the 2020 census. The judge called the White House's attempts to raise the question, which it has clearly lied about to Congress, an "egregious" violation of the Administrative Proced­ure Act. Undercounting as a result of the question put in jeopardy an estimated $43 billion in census-guided federal funds for Texas; the case is likely headed to the U.S. Supreme Court.