Dell Medical Is Bringing Health Care to the Homeless 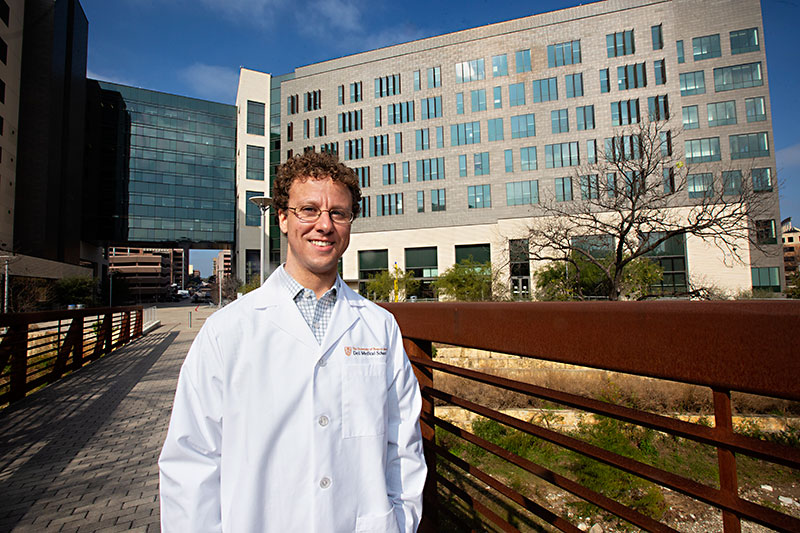 People without homes often didn't just run out of money; many saw their chances for a safe life derailed by physical and mental illness that does not improve once on the street. With a new federally funded mobile care team, UT-Austin's Dell Medical School, CommUnityCare, and Integral Care can deliver street medicine to manage the chronic health needs that make homelessness even more complex for those living it.

"For people experiencing homelessness, their whole lives are a series of competing demands," says Dr. Timothy Mercer of Dell Med. "They're trying to get medical care, mental health care, dealing with addictions, trying to get housed, meeting their survival needs – food, water – and managing the internal impact of transience, or of being in and out of the criminal justice system. It's just a lot."

It's especially "a lot" when viewed through the frame of a health care system built for a much different way of life, with demands that are simply annoying to most people but simply impossible when you live under a bridge. "Normally, the burden is entirely on the patient," says Dr. Audrey Kuang, clinical director of CommUnityCare's homeless health care programs and a professor at Dell Med. "They have to make appointments, figure out how to get a ride, go to the pharmacy, get their labs processed. For someone struggling with mental illness, or chronically sick, or worrying about their next meal, those hoops can be insurmountable obstacles."

The five-year, $2.3-million award from the Substance Abuse and Mental Health Services Administration is targeted to serve men and women with both behavioral health disorders and chronic medical conditions, who are not hard to find on Austin's streets. Mercer, an assistant professor and the director of global health at Dell Med, is the project director for the mobile care team, which extends the work being done by the three grant partners at their fixed and pop-up clinic locations (at the Austin Resource Center for the Homeless, at the C.D. Doyle clinic on East Seventh, at Community First! Village, and elsewhere) and with the city's Homelessness Outreach Street Team, alongside the Austin Police Department and Austin/Travis County Emer­gency Medical Services.

The team can now go farther – "on the street, a park bench, under a bridge, wherever we need to be," says Kuang – to practice "street medicine," which over the past 30 years has emerged as an distinct subspecialty, with best practices for engaging with clients who may not be used to being treated well by people in uniforms. While actual personnel may vary, the team will comprise a physician (or nurse practitioner) and psychiatrist (or NP), a licensed drug counselor, nursing and mental health case managers, and a peer navigator – that is, someone with lived experience. "One of the principles of the grant is to have a truly integrated, co-located team that can do everything at once if it's possible. That may still be a longitudinal goal, but by bringing our team together, we can see and hypothesize how that improves outcomes."

Mercer says "there isn't any shortage of need, or of people who meet the criteria" for grant eligibility, but that the team relies on the many partner organizations in the safety-net service systems to "know where clients are and identify new clients. There's a rich network of people with an on-the-ground presence, and that's how we have to do it. Our people don't have phones; they can't schedule online. We need to find and maintain contact and maintain trust by being there for them when we say we will."

“‘Housing first’ doesn’t mean ‘housing now,’ so what do we do in the meantime? I’d like to think we can do better than mere survival” – Dr. Timothy Mercer

But no matter how skillfully and efficiently care is delivered on the streets, as long as those patients don't have housing and the stability that comes with it, how effective can those efforts be? Mercer and the Dell Med team, like most who serve the homeless, keep their efforts in perspective. "I think 'housing first' is a philosophical and moral imperative from a human rights perspective, and that's what we believe," Mercer says. "But we also pragmatically know that 'housing first' doesn't mean 'housing now,' so what do we do in the meantime? I'd like to think we can do better than mere survival."

Mercer's patients are doing better than just surviving. "In my clinical practice, from my narrow, medical view of the world, I can see people taking their insulin and their blood pressure meds and adhering pretty well to treatment; their A1C [a measure of diabetes control] is coming down, and I've cured people of hepatitis C. But we're taking responsibility for the population's health as a whole, so I can measure my success also by their getting access to food, or transportation, or whatever the patient's priority is. Sometimes they can't deal with their diabetes until they sort out their housing or their addiction, or vice versa. Not just physically but also holistically, we'll meet patients where they are."

A version of this article appeared in print on January 18, 2019 with the headline: Street Medicine