Spider House Co-Owner Fires Back at Business Partner in Court

Conrad Bejarano, co-owner of Spider House Cafe and Ballroom, has filed two responses to a lawsuit brought against him in October by business partner John Dorgan. On Dec. 21, a day after the Chronicle's cover story on Spider House was published, Bejarano filed a motion to dismiss – arguing that Dorgan's suit challenges Bejarano's right to free speech. The motion relies on the Texas Citizens Participation Act, which specifically protects free speech made in connection with a "matter of public concern."

Dorgan's suit was filed in response to two Facebook posts in October 2017 – one from former Spider House employee Jeremy Rogers alleging Dorgan attempted to "sexually assault" Rogers' wife in 2014, and a response from Bejarano claiming to know nothing of Rogers' story and promising to ban Dorgan from the property. Dorgan has accused both Bejarano and Rogers of libel and slander that he says hurt both him and the business. Bejarano disagrees; in his motion to dismiss, he claims his 2017 statement addressed the "protection of Spider House staff and patrons" without ever reaching a conclusion "as to the validity" of Rogers' claim. Instead, he argues, he was addressing a matter of "public concern as defined by the TCPA."

In a second filing, Bejarano denies all of Dorgan's allegations and "demands strict proof thereof by a preponderance of the credible evidence," requesting relief to which he's entitled, while Dorgan "take[s] nothing by his suit" and bears all costs. Both responses were filed by Bejarano's first lawyer Bernard Weldon Ponder Jr.; on Jan. 3, Bejarano requested that the court substitute counsel; he is now being represented by Paul K. Brow­der and Jared Greathouse of local law firm Blazier, Christensen, Browder & Virr.

A version of this article appeared in print on January 11, 2019 with the headline: Spider House Suit Challenged 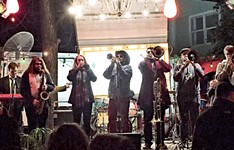