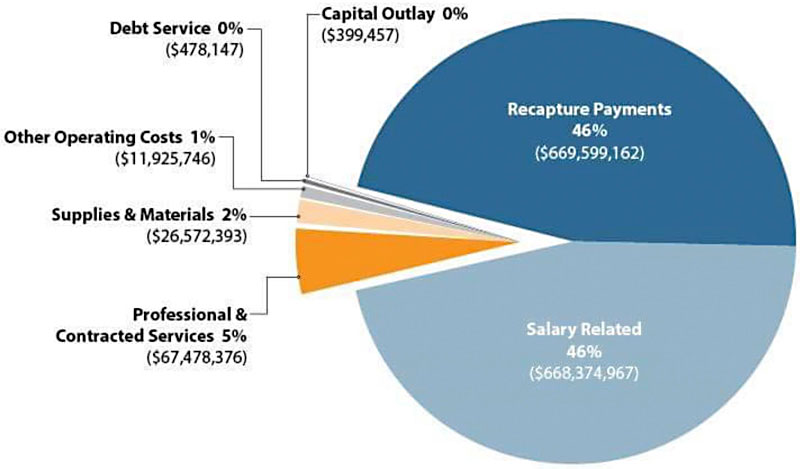 AISD sends as much money to the state in recapture payments as it pays in salaries, with very little left over to make easy cuts to close a shortfall in next year's school budget, currently estimated at more than $30 million.

The Austin ISD Board of Trustees met for the first time in 2019 on Monday night, and the sometimes tense discussion gave a glimpse of the immense challenges district leaders face over the next six months as they sketch out and adopt next year's budget. The meeting was bookended by two comparatively celebratory moments: Arati Singh's swearing-in as At-Large Place 9 trustee, and the election of new board officers (District 6 Trustee Geronimo Rodriguez will remain board president, while At-Large Place 8 Trustee Cindy Anderson will become vice president, and D5 Trustee Amber Elenz will be secretary).

But two agenda items sandwiched between those moments highlighted the less pleasant work that lies ahead. The district's Budget Stabilization Task Force presented its likely-to-be-controversial recommendations for navigating through AISD's fiscal crisis, and a briefing from district demographers revealed that AISD expects to continue losing students for at least the next 10 years.

The presentation delivered by the BSTF tri-chairs outlined the group's ideas both for cutting costs and growing revenue; the task force report, released last Friday, garnered headlines (which in turn garnered ire from several trustees) for recommending closing 15 schools and making cuts to magnet schools – AISD's crown jewels for many in the district and on the board – among its 40-plus items.

A testy exchange between BSTF tri-chair Robert Thomas and Anderson foreshadowed the debate to come. Anderson said the task force's assessment that magnet schools stonewalled "resources from reaching a critical mass of students who are typically minorities, English Language Learners and/or receives special education services" was an "attack" on the popular programs. She said the report failed to account for dollars allocated for the district's other speciality academic programs, which don't exist as a separate line item in the budget the way magnet funding does.

Thomas responded: "There was no attack, Trustee Anderson .... Quite frankly, I find it a little offensive that you would say what we did is offensive." He said the task force was instructed to "look critically" at how the district prioritized its budget – a mandate that would undoubtedly create controversy among various stakeholder groups. In an interview Tuesday, Anderson added that magnets – essentially, hubs of specialized academic programs – must exist, because "it doesn't make financial sense to spread those programs out across the district." She also said that "our biggest bucket of opportunity is in driving enrollment' and that choice programs and magnets, across the board, are all doing that for us."

BSTF members spent untold hours, in meetings and on their own, researching and deliberating the final recommendations. Only ideas that received support from at least 50% of the 30 members were included in the final report. In addition to listing the percentage of support each idea received, a rationale for the recommendation, and dissenting opinions from members who did not support a particular idea, the BSTF report also included "safeguards" intended to protect historically underserved parts of the district from experiencing an inequitable share of the fallout from any one decision.

The task force urged district leaders to craft a "thoughtful, deliberative, well-planned out process with a multi-year timeframe, done through the lens of equity" that avoids "[enhancing] segregation patterns already present in the community by placing a disproportionate amount of the fallout from consolidating campuses on "racial minorities and the economically disadvantaged." District 7 Trustee Yasmin Wagner acknowledged at the meeting a need for the AISD community to "stretch the idea" that students must live within close proximity of their schools to succeed. But, Wagner said, "if we start talking about busing to alleviate those issues, that's where we start losing families."

And according to the demographic report presented to the board Monday night, AISD will continue losing families through at least 2029. Over the next 10 years, the report estimates that AISD will lose 9.2% of its current student population, or just over 7,000 students – although the pace of enrollment decline is expected to decrease. The largest losses are expected at the middle school level, as previous years have seen declining elementary populations (which illustrates one bright spot in the report: Kindergarten enrollment is expected to grow beginning in 2023, due to increased birth rates in 2016).

Templeton Demographics, the Dallas research firm that helped conduct the forecast, attributes the enrollment decline to a variety of factors, including competition from charter schools, unaffordable in-district housing markets, and "increasing urbanization." Roughly three-quarters of AISD students reside in single-family homes, according to the report, but Austin has seen development of smaller and/or more expensive housing units, which AISD Director for Planning Services Beth Wilson described in an interview Tuesday as "not the most family friendly" of housing types, a concern that's shared by much of the new pro-housing City Council. Wilson said district leaders are aware of the challenge urbanization could pose and are developing strategies to live in that potential new reality. "As the urban core gets more expensive, people are moving out, so we're seeing overcrowding in the peripherals of our district," Wilson said. "We're looking at shrinking in the middle and expanding at the edges."

A version of this article appeared in print on January 11, 2019 with the headline: Sour Apples at AISD