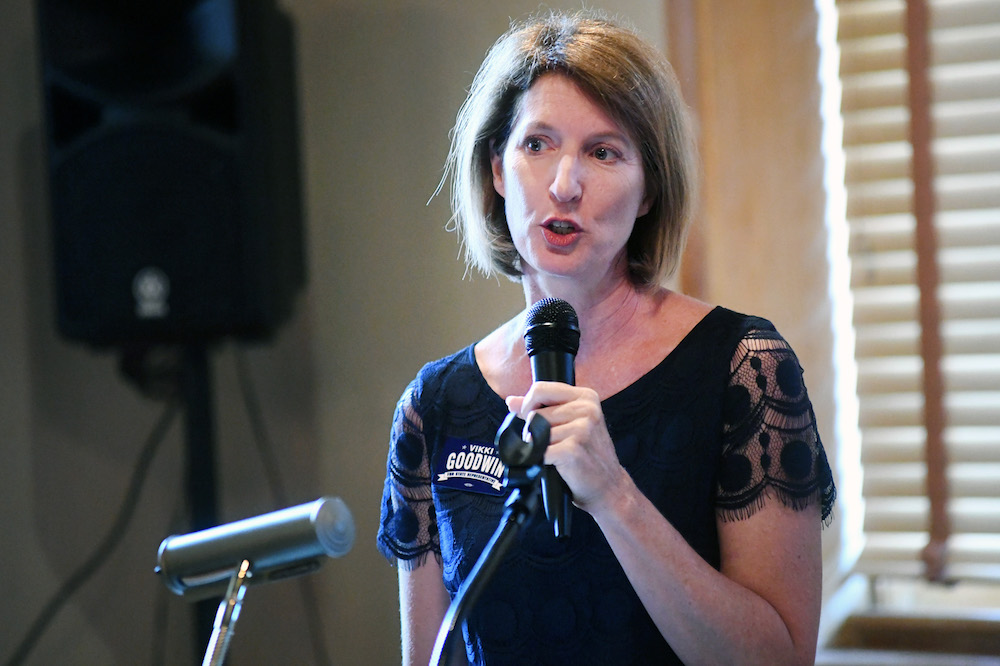 Austin Chronicle: What brought you into politics?

Vikki Goodwin: I grew up in Dallas and my parents were always very involved in the community. My mom served on the Dallas school board when I was a teenager, so there was a lot of discussion around the dinner table about school finance even at that time, in the mid-Eighties. Then I came to UT in 1985 and got my undergraduate [degree] in business, and after that I went to [UT’s] LBJ School where I got a master’s in public affairs. My interest is in public education, although I've not ever been a teacher or on the school board. It's just [from] having my kids go through AISD schools and having been involved in their school lives.

AC: What do you think you'll bring to the Capitol that Paul Workman lacked?

VG: The biggest thing is my drive to work on school finance reform. The Austin district is really in a serious situation, considering closing schools and increasing class sizes. In the campaign Workman said he didn't have any solutions to public education funding. I understand we don't have enough money in the system. Austin can't take from another district and have that be a win. We need to raise the basic allotment so that all districts are doing better. We need to increase the pie, because most districts have bare-bones budgets, both by increasing the basic allotment and by increasing the weights we give to our formulas, particularly for students with special needs like dyslexia and autism. They require more resources, and right now our weights are not adequate to account for how much we need to spend on certain populations.

AC: So, ideally, you would like to see both more funding injected into the system and a rethinking of how the funding is distributed?

VG: Yes, exactly. The Cost of Education Index, I've heard a number of times, is not reflective of the current reality educators are facing.

AC: What does meaningful/successful/comprehensive school finance reform look like to you?

VG: I will feel like we've been successful when the state is paying 50%. Since the state constitution says the state government should provide public education, they ought to at least provide half the funding for it. The Austin district has been paying more into recapture as it is losing enrollment, and somehow that trajectory has to change, because it's not sustainable. Eanes and Lake Travis ISDs are also paying more, though they aren't losing students in the same way.

VG: There's a long list of ideas and it's certainly going to require everybody putting in their two cents about which ones will work. You've got $12 billion in the rainy day fund, and while I don't see representatives getting behind taking money out of it, I could see potentially diverting the next biennium's [revenues] over to public education as a short-term fix. At the same time, [we could use] some of that money in something like an endowment fund that would, over time, [generate] interest and proceeds to use for public education.

Also, we haven't raised the gas tax since 1991, and a percentage of that goes to public education. Even if we raised it 5 cents [per gallon], that would make a difference. Sometimes you just have to chip away at certain areas, so that it adds up.

AC: Should the state be required to pay 50% of public education costs?

VG: I see it as a good idea. The state right now is relying on increasing property taxes. If we have a requirement that the state pay 50%, they will have to work harder on where that revenue comes from.

AC: How can the Lege achieve the Governor's goal of capping property tax rate increases and achieve school finance reform?

VG: I'm not in favor of a property tax cap; it's different for every district. I met with the mayor of Bee Cave, where they have a pretty low tax rate, because they're a smaller city. It doesn't make sense to have an across-the-board 2.5% tax [revenue] cap. I worry when people talk about property tax caps [and not] where the revenue is going to come from instead.

AC: Do you have any other ideas for the state to bring in more revenue for public schools?

VG: There’s a long list of revenues to present to representatives across the board. One of my LBJ School professors brought to me that we leave a huge amount of money on the table with agriculture exemptions. It's an incredible amount of money. I know you can't simply get rid of them, [but] we need to ensure we're giving ag exemptions to people who really need them, as opposed to people who may be living in a neighborhood with some deer or antelope. That's just one example of some of the exemptions or loopholes we have; I know a lot of people have talked about appraisals not being consistent throughout the state. Travis County does a good job of getting appraised property values close to market value, but I'm not sure that's true throughout the state. I've heard that some chemical refineries in Houston are not valued at their true market value, so they're getting away with not paying their fair share.

AC: What are some of your other top priorities for the session?

VG: There are other things within the education realm. I'm not in favor of the A-F [accountability] rating system. It hasn't been around long enough [for the Legislature] to make the decision on whether or not it's good for districts, but I personally am not in favor.

AC: So you would like to see that replaced with a different accountability system?

VG: I think so. An accountability system shouldn't just be based on standardized testing. It should also look at students getting into college or trade schools, or completing a couple of years of college while they're in secondary school. The A-F concept does not support all schools and all students; we need to make all schools the best they can be, and I feel like having a C rating doesn't help achieve that.

VG: The next big thing, I'd say, is mental health counselors at schools. After the Santa Fe shooting, the governor held roundtables and that seems to be one thing that people could agree on. We're having trouble finding enough money to pay for teachers and everything else schools need, but finding a way to help fund counselors will be a high priority for me. Dedicated funding would be ideal; somehow, there [should be] a requirement that schools have mental health counseling.

AC: What are some other issues important to your constituents?

VG: Transportation is huge throughout the district. I've got Steiner Ranch, which is bogged down with traffic. I know Celia Israel is working on legislation that would allow buses to ride on [highway] shoulders, which would help. Maybe encouraging more telecommuting could help as well. And then, water issues. There's a groundwater district that was set up last session that didn't get ratified, so picking up where that left off and trying to get it settled.

AC: Do you think the state's GOP officials can be persuaded to expand Medicaid?

VG: Well, we may have to chip away at that issue. One thing that might be palatable across the spectrum would be a solution for our maternal mortality crisis – expanding how long a woman can stay on Medicaid after giving birth, from three months to a year. [We can] add some places where most people will agree we need more healthcare, through expanding some of the grant programs or drawing down federal dollars for specific items.

AC: But not necessarily sweeping legislation to open up Medicaid to millions of Texans.

VG: I would be all for that, but to get the votes we need [in the Legislature], we may have to do it in chunks.

AC: Given that your party is still a minority in the House and will be facing a supermajority in the Senate, what do you see as the most achievable of your policy goals?

VG: I think we'll get something done with the groundwater district (laughs). The Bee Cave mayor brought to my attention that he's been working on a trade school for the Lake Travis area, so I'd like to help out with that. I am also meeting with all of the local politicians in the area to get their input on what their issues are and what I can do to help.