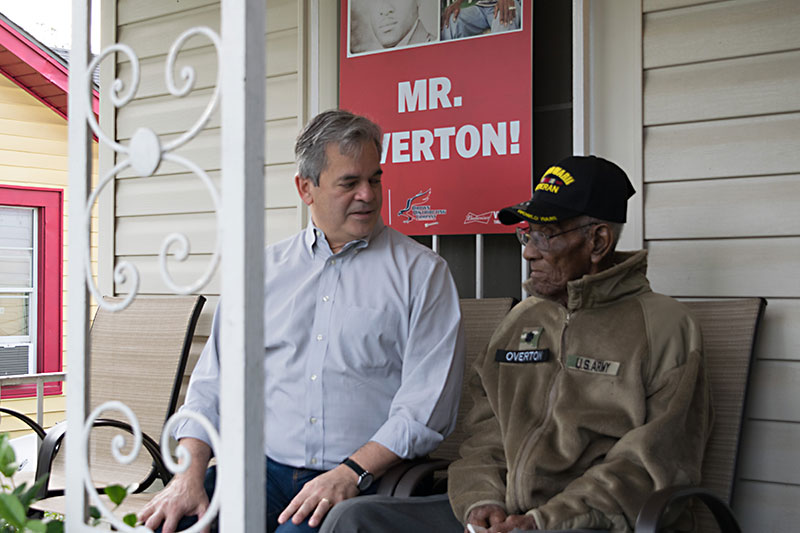 Longtime East Austinite Richard Overton, oldest surviving U.S. World War II veteran and indeed America's oldest man at 112-plus, passed away Dec. 27 following a bout of pneumonia. He credited his long life to daily cigars and whiskey, and counseled: "I don't worry about anything, and I don't meddle in other people's business." He's seen here celebrating his 111th birthday with Mayor Steve Adler. (Photo by Luiz Centenaro / CC BY-SA 4.0)

Old and New: City Council meets Monday, Jan. 7, at 6pm to inaugurate re-elected incumbents Steve Adler, Pio Renteria, Ann Kitchen, and Kathie Tovo, and new members Natasha Harper-Madison and Paige Ellis. The brief agenda also includes a Council vote for mayor pro tem – traditionally the longest-serving member, who is Tovo (the past MPT), but there are rumbles of others, notably Delia Garza, eyeing the ceremonial slot.

Pink Dome Party! And then, on Jan. 8, unto us an 86th Texas Legislature is born, with mostly ceremonial and celebratory business aside from the presumptive ascension of Rep. Dennis Bonnen as the new speaker of the Texas House. Our conversations with the Austin delegation can be found here.

No Scooters Involved: At 1:06am on Jan. 1, in heavy fog that may have been worsened by fireworks smoke, a multicar collision on SH 130 near Pflugerville ensnared 32 vehicles, including two semitrucks. The pileup involved 56 people as drivers or passengers (none of whom, remarkably, were drunk, according to first responders); 10 people were injured. A Travis County ­deputy attempting to warn drivers away barely escaped injury himself; his vehicle was among those hit by others.

Bevo Attacked Uga! For real, the two mascots (our 1,700-pound steer, their 62-pound bulldog) had a dustup preceding the Texas Longhorns' rather emphatic dispatch of Georgia in the Sugar Bowl on Jan. 1. Texas QB and game MVP Sam Ehlinger capped the evening with a call to Longhorn Nation: "We're baaaaack. ..."

Twit or Tweet: As President Trump entered a multiday fugue state on Twitter, the U.S. government neared its third week of partial shutdown, with Democratic House leaders aiming to reopen for business without funding any Mexican border wall. "We are giving the Republicans [in the Senate] an opportunity to take yes for an answer," said returning speaker Nancy Pelosi.