Trying to reinvent the wheel since 2014 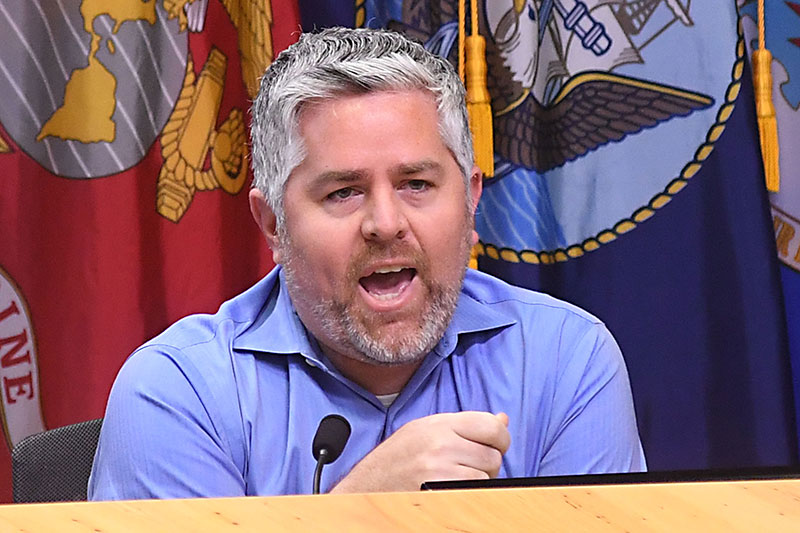 Council Member Jimmy Flannigan actually had to say out loud that new members "deserve the same respect we show each other." (Photo by John Anderson)

Toward the end of a 90-minute briefing at Tuesday's work session on "Government That Works for All" – a banner for the city's campaign to modernize City Hall and its internal workings – Council Member Delia Garza noted that the nature of the discussion itself was an example of how policy conversations on the dais are often derailed.

The briefing started off innocuously enough. Staff told Council of its work to provide dashboards and metrics for the outcome-based budgeting system instituted with the Strategic Direction 2023 framework put in place last fiscal year. City Man­ager Spencer Cronk expects a more data-driven process for Council to use in budget deliberations, and Chief Financial Officer Elaine Hart said staff is working to "triage" programs in each department, but Council will have to decide whether to reaffirm its commitment to each city program.

“We need to change some of the ways we do things, including the way we run Council meetings.” – Delia Garza

Talk then turned to potential efficiencies in Council meetings themselves, which is always easier said than done; the 10-1 Council has struggled to reinvent this wheel since it was seated in 2014. One potential change is a 9am start time to get people home earlier, but Mayor Pro Tem Kathie Tovo and CM Alison Alter pushed back on that one, pointing out that they (and some staffers) have children they need to get to school during that hour. Another potential time saver would be to approve consent agenda items outside of the Thursday meeting.

However, CM Leslie Pool said she feels Council has been doing better in recent weeks and expressed frustration with some complaints about meetings that stretch into the night, insisting "we are never up there playing around and wasting people's time." She indicated her opposition to the suggestion that Council vote electronically, saying that part of Austin's character is reflected in the informal communication between the public and elected officials.

Pool also provoked an argument with CM Jimmy Flannigan by suggesting that the new members joining the dais in January (who, we learned that evening, will be Natasha Harper-Madison and Paige Ellis) not be given a chance to make new suggestions on the "Works for All" overhaul, arguing that making more changes so soon would be counterproductive. Flannigan responded sharply that the new members should be shown "the same respect we show for each other on their first day" and therefore be included in the process.

The entire conversation was, as Garza said, typical of what often happens at Council meetings. Staff or members offer ideas or changes, a regressive bloc does its expected naysaying, and then a couple of members argue over something tangentially related to their actual ideological beefs.

"We are a growing city, and we need to change some of the ways we do things, including the way we run Council meetings," Garza said. "I think we need to try new things. To hear people say, 'We can't start early, but we're not going to go late either.' ... We need to try new things, and I look forward to continuing this conversation with our new colleagues."

After all that talk about talking, it seems fitting that Thursday's meeting, the final rodeo for this cast of cowboys and cowgirls, would boast a 108-Item agenda. Maybe that long haul will make such an impression that members will enter 2019 with new dedication to making some tweaks.

Item 14 codifies more specific rules governing gifts to city officials, clarifying that they apply to anything valued at over $50, but not to city-related convention or training attendance or gifts between peers.

Items 20 and 21 both deal with land in the city's extraterritorial jurisdiction. Item 20 deals with Lazy Nine Municipal Utility Dis­trict's desire to annex 124 acres in the western part of the county (south of Highway 71). Austin Water can't properly serve the area, so staff recommends approval; however, Austin water quality restrictions would be replaced by those of the MUD and the city of Bee Cave, which are less stringent. Item 21 deals with the long-discussed transfer of 33 acres to the city of Dripping Springs; the land is in the Barton Springs aquifer zone, but the two cities have forged an agreement on development restrictions.

Item 40 changes the eligibility requirements for the city's minority- and women-owned business program as a result of a 2015 study. Item 43 would endorse Austin Police Chief Brian Manley's staffing plan in the next budget; in the last two budget cycles, Council promised more APD officers than the city could afford to hire. In other staffing news, Item 46 sets the city manager's salary and benefit package, and Item 47 schedules an annual performance review for the office during the last two months of the year.

A version of this article appeared in print on December 14, 2018 with the headline: Wasting People’s Time