In the end, District Attorney Margaret Moore's forecast – "Maybe we're not ready yet, in this town, for big, bold changes" – proved prophetic. The long-simmering proposal to create a Travis County Criminal District Attorney's Office – via a merger of the current D.A.'s and County Attorney's offices – came a cropper Tuesday at Commissioners Court.

Commissioner Gerald Daugherty made a tentative motion to move forward on the proposal – simultaneously indicating that he wasn't yet convinced of its soundness – and then the members of the court kicked it around for a bit among themselves while tossing questions to Moore and County Attorney David Escamilla. Most of those questions – concerning anticipated efficiencies, benefits to defendants, potential conflicts of interest, etc. – had been answered many times before in the several public discussions the court had devoted to the subject.

Moore and Escamilla fielded the questions one more time, but, in the end, for naught. After perhaps 30 minutes of discussion, County Judge Sarah Eckhardt asked for a second to Daugherty's initial motion and received no response. With that, the merger proposal initiated by Escamilla and Moore nearly a year ago officially died. ("Commissioners Ponder D.A./C.A. Merger," Dec. 10).

Following the outcome, Escamilla reiterated what he had told the Chronicle last week: "People are afraid of change." Moore said she wasn't really "surprised" by the outcome, and sounded resigned – "I didn't know what would happen, and decided I would simply watch, wait, and see."

Hoping to salvage some progress, Eckhardt – a former prosecutor and persistently the strongest supporter of the merger – immediately proposed that the court instead consider merging all criminal prosecutions (misdemeanors are currently handled by the C.A., felonies by the D.A.) and leave civil matters with the county attorney. Her somewhat surprised colleagues quickly agreed to consider the question, though Escamilla and Moore said they had done no formal preparation for that scenario. Eckhardt's proposed change would also require legislative action; the county's legislative liaison Deece Eckstein told the commissioners there was still time to add it to their legislative agenda, should they choose. Moore and Escamilla told the Chronicle that model (used in a few Texas counties) poses its own difficulties. For example, Escamilla said, his combined administration of (noncriminal) protective orders with (criminal) domestic violence cases, considered a best practice by local advocacy groups, presumably could not continue under the new proposal.

Moore, Escamilla, and Eckhardt had argued that a merger would deliver better justice at the jail intake level, where 24/7 coverage by a C.D.A. prosecutor would mean fewer and more precise charges and less preliminary jail time for defendants. They added that the administrative savings under a merger (on IT, personnel departments, staff attrition, etc.) would pay for that coverage – resources that wouldn't be available if the change were made administratively.

Daugherty acknowledged those reasons but noted his primary interest is significant savings "to the bottom line." Of the other commissioners, Brigid Shea said she remained skeptical about potential conflicts of interest posed by a merger, and while Margaret Gómez said she's "not opposed to change," she prefers the current system, which offers the court on-the-spot assistance from Escamilla's office. "I like to have the county attorney there, and I like the fact that the county attorney is elected by the voters."

Gómez's comment tangentially acknowledged what has been an off-the-record reason to oppose the merger: It would eliminate one prominent elected office for rising Democratic candidates, not to mention rising judicial candidates following in the county attorney's footsteps (when Escamilla retires at the end of 2020). There are a couple of those already in the shadows (they can do their own PR, when the time comes), and presumably more in the queue. "Some of the opposition," said one observer, "was politics." 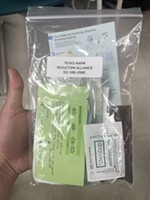 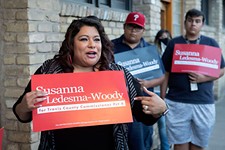 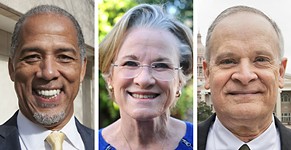