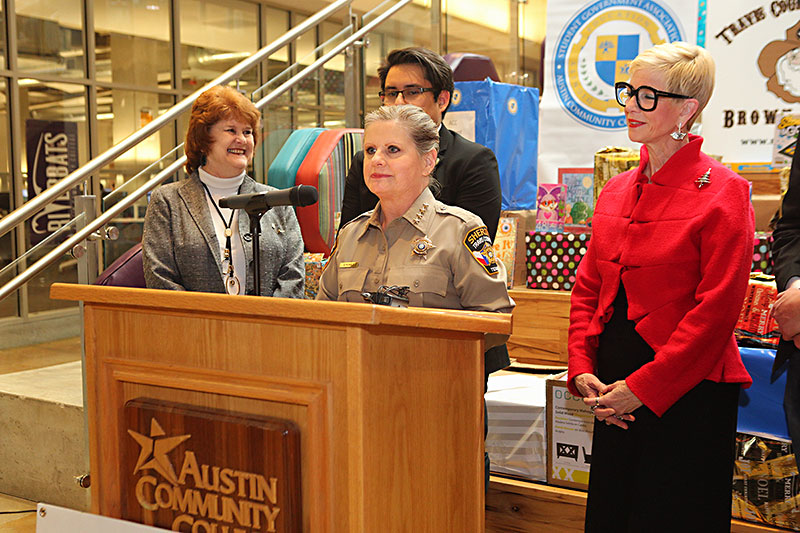 Travis County Sheriff Sally Hernandez (center) accepts more than 4,300 books, puzzles, and games donated by Austin Community College to the sheriff's Brown Santa Program. The items are collected each year by ACC's Student Government Association; since 2009, the "I Can Read" drive has delivered more than 28,000 books to Travis County children via Brown Santa. (Photo by Jana Birchum)

No Council Today: Last Austin City Council meeting of the year is next Thursday, Dec. 13. Highlights will include applying the city's anti-discrimination and harassment policies to board and commission members, and a performance review plan for the city manager.

Polls Are Open! Through Tue., Dec. 4, early turnout for the run-off election was at a dismal 1.5%. Early voting ends Fri., Dec. 7; E-day is Tuesday, Dec. 11. See the Chronicle's endorsements.

Wheels on the Bus: Capital Metro will keep giving K-12 students a free ride. The board voted Wednesday to make permanent the fare structure change first piloted in June.

Getting An Upgrade: City of Austin Util­ities customers will see a makeover to the online portal for electric, water, and waste services billing. Users can expect easier access via tablets and smartphones as well as a "quick pay" option.

A Worst First: Texas has the most uninsured children of any state, according to the Georgetown University Center for Children and Families. The 835,000 uninsured children in 2017 represents an increase of nearly 10% from the previous year.

Still More Scooters: Lyft will follow Uber with its own pilot to bring 500 more shareable two-wheelers onto Austin streets. Meanwhile, Lime had to take 500 units off Downtown streets for violating the city's new dockless mobility rules.

MLS Stoppage Time: A judge in Ohio denied a motion made by Major League Soccer in September to dismiss the lawsuit filed by Ohio A.G. (and Governor-elect) Mike DeWine against MLS and Precourt Sports Ventures to keep the Columbus Crew from relocating to Austin. But Judge Jeffrey Brown also issued a stay that will keep the case from moving forward indefinitely, which should give the Crew's prospective new owners time to finalize a deal to keep the team in Columbus, while PSV starts up a new team here.

Fund Public Schools! Travis County officials outlined at Commissioners Court on Tue., Dec. 4 their priorities for the upcoming 86th Legislature. Among them: a push to increase state funding for public schools. Commissioner Brigid Shea warned that "our community is facing significant school closures" if action is not taken by the Lege on finance reform. See "AISD Prepares to Slice the Apple," Dec. 7.