A Peek Into the New Lege's Anti-Choice Plan

It can surely be worse 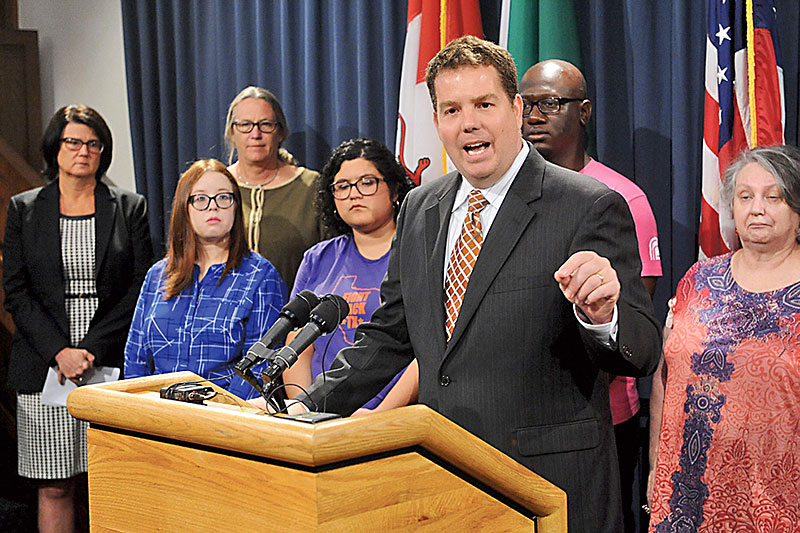 Blake Rocap of NARAL Pro-Choice Texas (shown here in 2016) says "I know we may not have the votes. ... But we can offer a vision for a better Texas where women have the respect and access they deserve." (photo by Jana Birchum)

The Texas Legislature has spent the past decade crafting draconian abortion restrictions that inevitably prompt prolonged, costly, and controversial legal challenges. Even when the U.S. Supreme Court in 2016 struck down major parts of HB 2 (the subject of Wendy Davis' celebrated filibuster), legislators turned around and passed new anti-choice laws last session, including banning abortion care from private insurance, forcing women to bury or cremate fetal tissue (now heading to the 5th Circuit Court of Appeals), and prohibiting the safest and most common abortion procedure available during the second trimester (known as "D&E" and also tangled up at the 5th Circuit). (See "Fallout From the Lege's War on Repro­duc­tive Rights," June 23, 2017.)

A peek into the playbook of Texas' powerful anti-choice lobbyists makes clear that next year's 86th Legislature will be no different.

John Seago with Texas Right to Life, arguably the most influential anti-abortion organization in the state, tells us his group is focused on two top priorities: a "Pre-Born Non-Discrimination Act" removing the exception provided in the 20-week ban for severe fetal abnormality, and barring local governments from entering into contracts with abortion providers or affiliates – which targets Austin's lease agreement with Plan­ned Parenthood for its E. Seventh Street location (where abortion care is not provided).

Both of these bills failed to pass in 2017, with even some Republicans – like outgoing Rep. Byron Cook (R-Corsicana) – speaking out against the obvious cruelty of removing the 20-week exception. Seago takes aim at Cook, Speaker Joe Straus, and others that anti-choice activists consider moderates: "Leadership in the House worked hard to kill certain legislation through a disingenuous effort to follow procedural steps," says Seago. "It took a lot of political will to keep bringing them up."

While not major priorities for his group, Seago predicts this session will also see proposed restrictions on using telemedicine to let women access emergency contraception, as well as a so-called heartbeat bill – which bars abortion when a heartbeat is detected, typically around seven weeks of pregnancy, a common goal on the anti-choice right.

Often at very public odds, TRL and its competitor Texas Alliance for Life both prioritize ending local government contracts with Planned Parenthood et al. But TAL's second priority, says its founder and leader Joe Pojman, is to prohibit "wrongful birth" lawsuits against physicians who withhold information from patients about fetal anomalies, another bill that didn't pass last session. "These suits send the wrong message by saying society thinks a child born with a disability has less value than a child who is healthy," says Pojman.

The discord between the two groups stems from TRL's ties to well-funded conservative group Empower Texans, and from the group's aggressive penchant for anti-choice bills that are sure to face legal challenges ("Deep Divisions in Texas' Powerful Anti-Choice Movement," April 6). Unlike TRL, Alliance for Life adopts a "prudent" approach to bills; for instance, it cautions against adopting bans at less than 20 weeks and is pessimistic about the 5th Circuit upholding the 2017 D&E ban. "Those laws do very poorly in federal court; there's precedent against the law that's strongly against us," says Pojman. Meanwhile, TRL optimistically sees the D&E case as getting them "closer to challenging the legal foundation of Roe."

With Cook and Straus making their exits, Democrats are also working with a slightly wider base – on the House side, they're up 12 presumably pro-choice members, and in the Senate the GOP lost two dependable anti-choice votes. Republican dominance remains strong and any power shift, however modest, will become clearer when committee chairs are named by the next speaker, most likely Rep. Dennis Bonnen (R-Angleton), who has received a 100% score from Texas Right to Life over the past four consecutive sessions.

Pro-choice leaders look for creative ways to reverse, or at least mitigate, years of damage inflicted by drastic reproductive health burdens. This includes legislation to allow advanced-practice nurses, physician assistants, and nurse-midwives to perform abortions; expanding Medicaid coverage for new mothers from 30 days to a year; allowing CHIP to cover contraception for minors and new mothers; and implementing all the proposals outlined in the Maternal Mortality and Morbidity Task Force report. "The other side gets to push their new restrictions in a vacuum, as if clinics have not already shut down and women aren't delaying their procedures by weeks," says Blake Rocap, legislative counsel with NARAL Pro-Choice Texas. "We're not starting from the ground floor – we are one of the most geographically challenging and restrictive places for abortion in the entire country."

"I'm not stupid, I know we may not have the votes to pass all these bills," says Rocap. "But we can offer a vision for a better Texas where women have the respect and access they deserve."

In the Senate, Sen. José Rodríguez (D-El Paso) has filed a handful of bills that seek to expand women's health access, including SB 150, titled the "Whole Woman's Health Act." The 12-page bill, essentially an ode to reaffirming a woman's constitutional right to abortion care, references the Supreme Court ruling against Texas in Whole Woman's Health v. Hellerstedt, which required that courts consider the burdens a law imposes on abortion access together with its purported benefits, with states forced to show actual evidence of a public health benefit to onerous laws.

But anti-choice activists see that major SCOTUS slapdown of Texas as almost trivial, and certainly not a barrier to legislation this upcoming session. "In the big picture, it was inconsequential," Seago says of the historic ruling. "It didn't continue the debate we need to be having as a movement. The way forward in the courts is the state's interest in pre-born life; that's the real moral center for us."

A version of this article appeared in print on November 23, 2018 with the headline: A Peek Into the New Lege’s Anti-Choice Plan