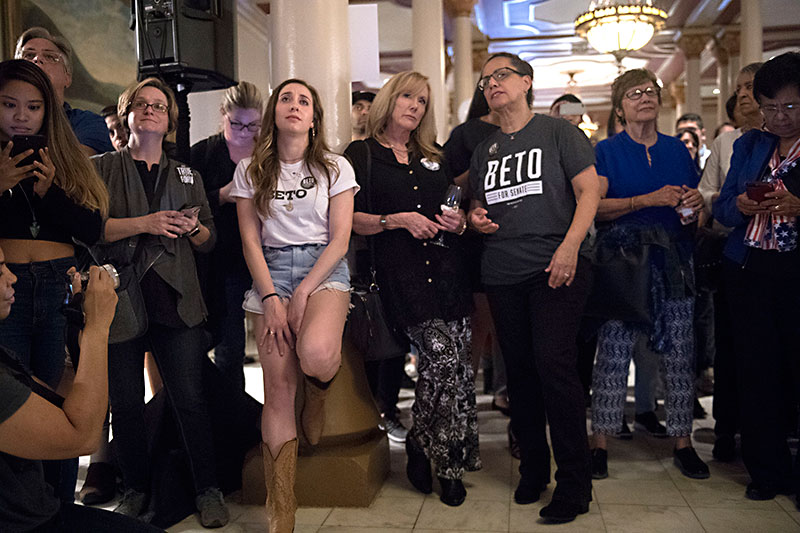 Democrats gathered at the Driskill Hotel on election night to watch the returns in Beto O'Rourke's hard-fought, hope-filled, but ultimately unsuccessful quest to topple U.S. Sen. Ted Cruz. Betomania did spur down-ballot wins for Democrats across the state in legislative, local, and judicial races. (photo by Jana Birchum)

Council's Week Off: There's no City Council meeting this week. Next meeting's Thursday, Nov. 15. On the agenda already: a review of the boil-water notice, movement of a police monitor ordinance out of the police contract and into city code, and the confirmation of new Austin Fire Chief Joel Baker. See "Ellen Troxclair: Bye, Bye, Bye," Nov. 9.

On to 2020: Election Day was Tuesday, and hoo-boy do we have coverage.

Among the winners Locally, Steve Adler and Kathie Tovo secured victories on Tuesday. Districts 1, 3, and 8 will go to a December run-off.

The morning After: President Trump celebrated the passing of the midterms by coercing the resignation of Attorney General Jeff Sessions. Matt Whitaker, until recently Sessions' chief of staff, will take over as acting A.G, until Trump can get someone (anyone?) confirmed in the Senate.

So It Begins: Hottest new political rumor, D.C. and Austin, is that incumbent Republican Sen. John Cornyn – scheduled for a re-election contest in 2020 – will instead announce his retirement in the next couple of weeks, leaving the GOP primary field open for Lite Guv Dan Patrick, former House Speaker Joe Straus, and maybe TX-10 House incumbent Michael McCaul. On the Dem side ... don't bet against Beto.

Around the Lege: Get ready for a swarm of new state legislation: This Monday, Nov. 12, marks the first day of bill pre-filing for the 86th legislative session at the Capitol.

Widespread Google Walkout: Coordinating with actions across the globe, dozens of Google Austin employees walked out of their offices last Friday to protest the way the tech company handled a recent sexual harassment scandal. The company is said to have protected top executives accused of sexual misconduct, including former executive Andy Rubin, who was provided with a $90 million exit package upon his departure in 2014.