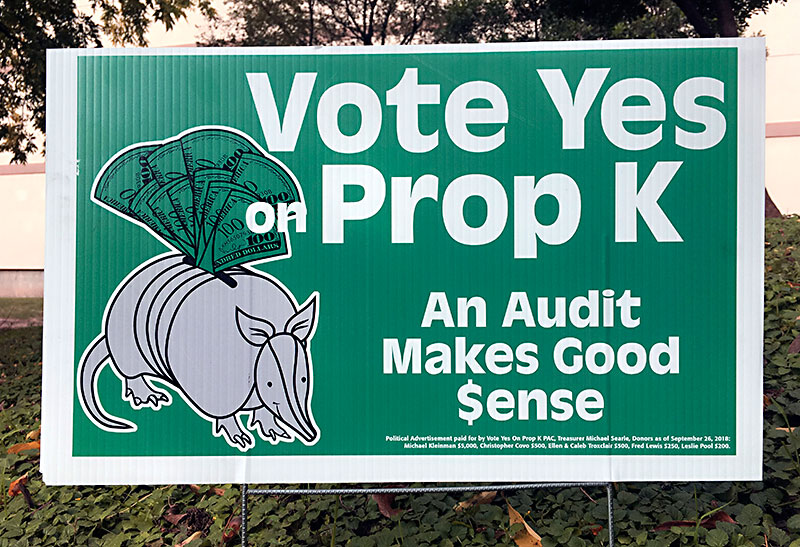 Supporters of Proposition K (the "efficiency audit") have been taking a pounding for the anonymous "dark money" that funded the petition drive that put it on the ballot ("Strange Bedfellows, Stranger Politics," Aug. 10). Last week, they picked up a new defender – Frank Rodriguez, former budget director for Mayor Steve Adler.

The Prop K campaign released a report by Rodriguez ("The Case for Proposition K") ostensibly attesting to the inadequacies of the Office of the City Auditor, which Rodriguez claims only conducts "performance" audits to review the "effectiveness" of city programs, not to save the city money. He lists 52 city audits in brief summation and concludes, "The return on investment from the City Auditor's audits are really measured in terms of service effectiveness and not ROI on potential and actual savings. The potential for an ROI for an efficiency audit is reducing external costs, reducing personnel costs, increasing cost recovery, organizational restructuring, outsourcing operations, and increasing revenue."

Prop K opponents note that phrases like "reducing personnel costs" and "outsourcing operations" are euphemisms for layoffs and privatization. In his audit summaries, Rodri­guez identifies about $161,000 in "savings and cost avoidance," but otherwise ignores the possibility that improving performance by definition saves money.

City Auditor Corrie Stokes told the Chronicle, "The performance audits that we do, we're supposed to look at both efficiency and effectiveness, and I think we do that. Sometimes that means suggesting ways of saving money, and sometimes we even recommend that the city spend more, for better public service. ... 'Spending money effectively' is a good way to say that."

Unsurprisingly, one report isn't included in Rodriguez's summary list ­– the 723-page July 2018 report on the quite unflattering investigation of his own ethics, looking at his tenure on the Hispanic/Latino Quality of Life Resource Advisory Com­mission (nominated by then-Council Member Laura Morri­son) and then in Mayor Adler's office. (Rodriguez left the latter position in Septem­ber 2017, for "health reasons.")

That investigation (initiated after reporting by the Statesman's Nolan Hicks, now at the New York Post) was outsourced to consulting auditors HSSK and the Gober Group, as required by ordinance for allegations against Council staff. The review found that during his four years as a city official, Rodriguez failed to recuse himself from commission votes on contract recommendations in which he had a financial interest; continued, as a mayoral aide, to receive consulting payments based on city contracts; helped direct contracts to the Latino HealthCare Forum, where he held part-time employment and his wife, Linda Smith, was chief administrative officer; and generally failed to fully disclose his various conflicts of interest. The report also noted that Rodriguez apparently deleted emails relevant to the investigation from his city of Austin computer. Rodriguez has denied all violations; the auditor's report has been submitted as a complaint to the Ethics Review Commission for hearings and potential action.

A version of this article appeared in print on November 2, 2018 with the headline: Another Strange Bedfellow

Election Ticker: Su Voto Es Su Voz!
Read up, look up, get down to the polls ...