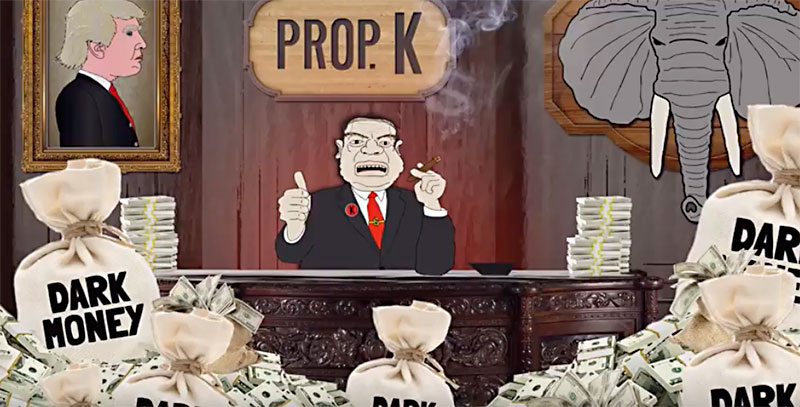 Representing "Republican Dark Money," a fat cat with a framed portrait of Donald Trump urges viewers to "ignore the Statesman and the Chronicle" and vote for Prop K. The satirical online ad, paid for by Austin Citizens for Truthful Petitions, skewers the dark money and conservative forces behind the call to independently audit the City of Austin. Don't ask questions, just trust the cigar-chomping beefy guy in the suit whose friends, he insists, definitely are not the Koch brothers. Unlike the funders who brought you Prop K, the ad's donors are made public: David Butts, AFSCME Austin Equity PAC, Perry Lorenz, Janis Pinnelli, John Donisi, Mary Sanger, and Mark Nathan. – Mary Tuma

Council's Off Week: No City Council meeting this week (presumably they're all treading water, like the rest of us) – the early agenda for Nov. 1 is fairly light, dominated by zoning items, including the return of the Camelback PUD for second and third readings (with all questions and mediations answered ...). See "Camelback PUD Ambles Forward," Oct. 26.

Boil Your Water: As of Tuesday afternoon, the city had turned the corner on its potable water shortage, as conservation had reduced demand sufficiently to allow treated water supplies to replenish. Officials still ask residents to boil water before using, and to conserve, in hopes that the emergency (barring further storms) would persist only a few days. See "The Floods Hit Sandy Creek," Oct. 26, and check online for updates.

Rape Kit Sitch: The Texas Department of Public Safety has been awarded $187,092 by the U.S. Department of Justice to help inventory, track, and report untested rape kits. The money is part of $145 million given to law enforcement agencies and crime labs across the country to assist with processing forensic evidence and identifying ­perpetrators.

The Texas Hammer: A newly formed coalition of 16 business groups have banded together to fight Austin labor ordinances at the Capitol. The Alliance for Securing and Strengthening the Economy in Texas includes players that have sued to repeal the city's paid sick leave ordinance. Their goal is to pre-empt cities from passing employment and labor protections.

At the Border: A new study finds family separations and anti-immigrant policies are causing a mental health crisis in the Rio Grande Valley. Around 1,800 children in the South Texas area had a parent deported by ICE in 2017, resulting in increased levels of "toxic stress" in the community, reports the Human Impact Partners and La Unión del Pueblo Entero.

A Lost Cause? Sid Miller, a clown and also a state official, threw his ample weight behind a new Confederate license plate design, which – since it doesn't show the battle flag – is fine and dandy by him. The last time Texas tried this, it went to the U.S. Supreme Court, which ruled the state didn't hafta issue Rebel plates if it didn't wanna, even if it hurt the Sons of Confederate Veterans' fee-fees. Miller's election opponent Kim Olson reminded him, and voters, that he is the agriculture ­commissioner.