Fours on the Floor

Handicapping the next Council’s coalitions on land use 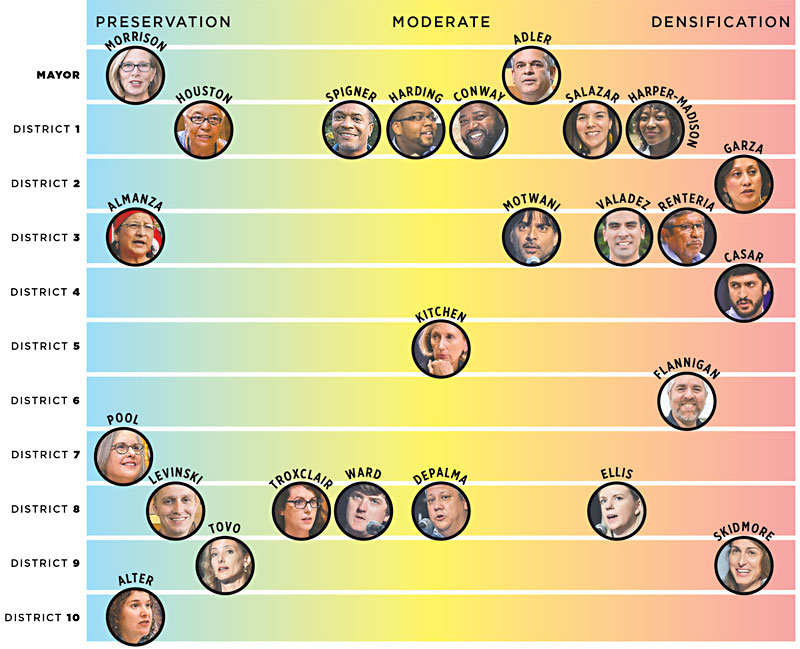 Sometimes following land use in Austin is like hitting yourself over the head with a 4x4. And there's a reason for that. Since January of 2017, when the current Council took form, and conversations about CodeNEXT and the uniquely necessary rewrite of our city's outdated land use code started to heat up, sentiment among the 11 members has been explicitly split four by four, with three members sandwiched somewhere in between.

But that could change following the Nov­ember election, where two incumbents are set to depart and two others face challenges from opponents with wildly different views on land use. (District 5 CM Ann Kitchen is running unopposed.) No matter what happens, the District 1 seat will be occupied by someone who's more density-minded than retiring CM Ora Houston; each of the candidates vying to fill her seat break more urbanist than the East Austin icon. And District 9 could see a significant flip if Dan­i­elle Skidmore can upend Kathie Tovo, who's been a reliable vote for the preservation of neighborhoods since arriving in 2011.

Less clear is what could happen in Dis­trict 3, where Pio Renteria is hoping to hold on to his seat, and District 8, where Ellen Troxclair is set to leave City Hall after one term. Renteria's sister and opponent Susana Almanza would fall firmly in the preservationist camp, though her campaign's been quiet for a while. James Val­a­dez and Amit Motwani both sit closer to Renteria, though they've each expressed a desire to be more committed to compromise and looking at each vote individually than the incumbent, who reliably sides with his colleagues on the densification end. In D8, a Bobby Levinski win would net preservationists a true believer, though the race to replace Troxclair involves four candidates – and while Troxclair protégé Frank Ward may be more of the same, Rich DePalma and Paige Ellis both lean more toward a more progressive urbanism, rather than Troxclair's pro-business positions.

The mayoral race – incumbent Steve Adler versus former council member and Austin Neighborhoods Council ex-president Laura Morrison – is a contest between the compromiser-in-chief and a candidate who's waged the bulk of her campaign on being a champion of preservationists throughout the city.

So what's that mean for dais dynamics? Let's go to our endorsements. Should everybody we endorse win in November (and Vincent Harding beat Natasha Harper-Madison), the next iteration of Council will be split ... four by four, with three sandwiched somewhere in between. (All that work for nothing!) That in all likelihood means two more years of split 6-5 votes.

Alternately, preservationists have a tempting opportunity to further tilt the dais by electing Morrison, Almanza, and Levinski and re-electing Tovo, creating a strong six-member coalition with Alison Alter (D10) and Leslie Pool (D7). The same type of opportunity exists for the other side, if voters in Districts 1, 3, 8, and 9 elect Harper-Madison, Renteria, Ellis, and Skidmore, enjoining them with Delia Garza, Greg Casar, and Jimmy Flannigan for a seven-member densificaTRON the likes of which the city has not seen in decades, if ever.

And if you want the most people to meet in the middle? Vote in Adler, Harding, Motwani, Kitchen, and DePalma, thereby creating a five-course compromise that would leave six stranded on the two ends. Would a moderate consensus on land use lead to more productive conversations and initiatives moving forward? Hardly. This is Austin, after all. But it would create a little more suspense during Thursday meetings, and give us more swing votes to consider until Garza, Casar, Flannigan, Pool, and Alter come up for election in two years. 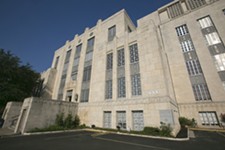