Election funds flow to and from candidates and PACs 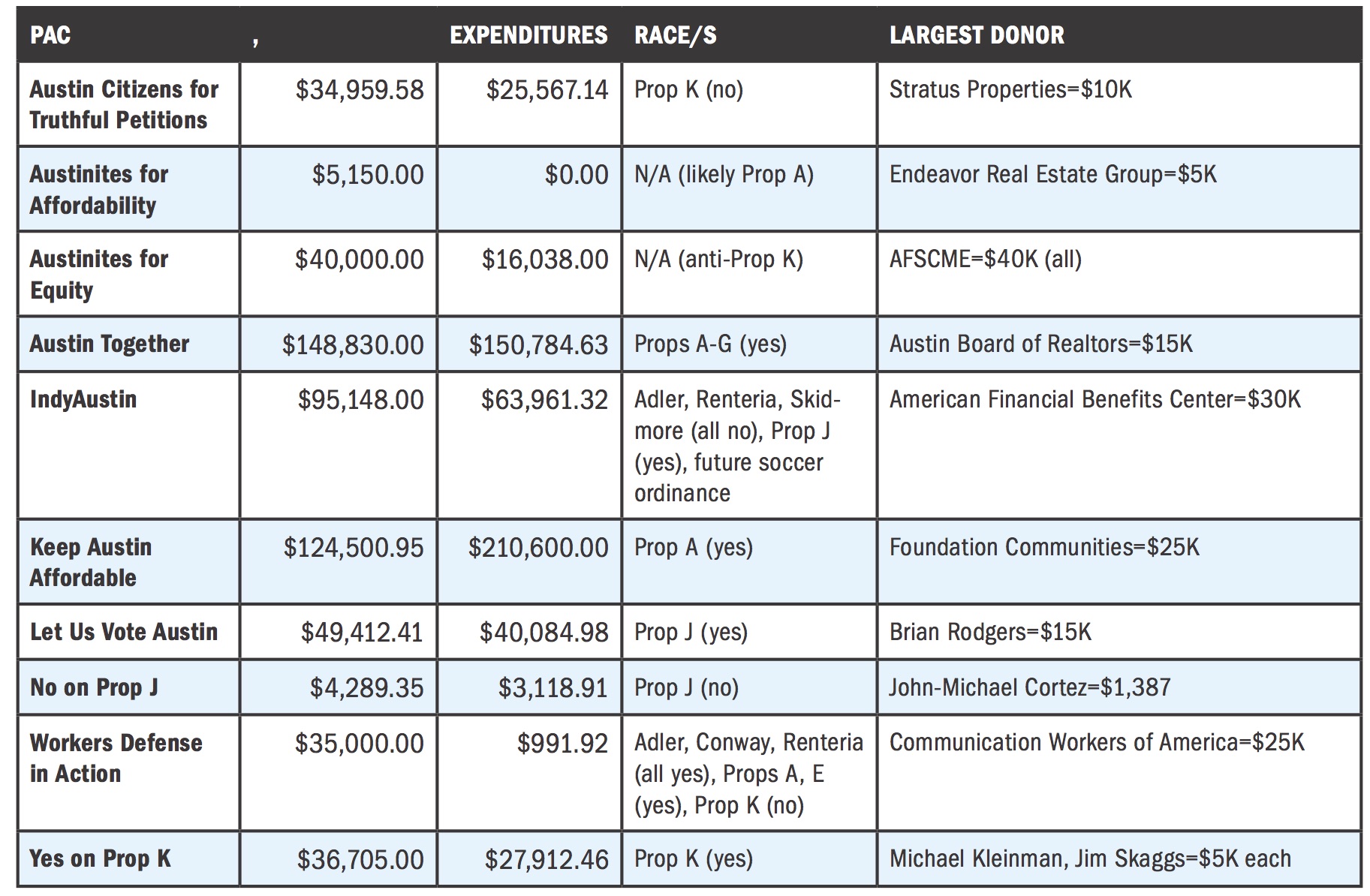 The "30-day-out" finance reports filed by candidates last week (due Oct. 9) contained few surprises – Laura Morrison's fundraising is scant even compared to the leading Council candidates, let alone incumbent Mayor Steve Adler's six-figure haul; Vincent Harding and Danielle Skidmore are the top fundraisers among the Council non-incumbents; there are four AISD and ACC candidates who've raised more than Susana Almanza; and other such factoids. More interesting and important are the finances of the political action committees who can raise and spend as much as they please to back their preferred outcomes, but who also have to file more reports more frequently. Thanks to the Office of the City Clerk's handy (and long-awaited) campaign finance database that tracks all transactions, here's what's going down on the PAC front:

• Even though few politicos think the city bond package is in danger, its backers are taking no chances, wrangling enough cash to go on TV both for the whole package (Austin Together) and specifically for Prop A (Keep Austin Affordable).

• So far, Prop J proponents are far outpacing its declared opposition. (There's a lag of a couple of days in reporting, so recent transactions – like for ads in this very issue – may be yet to be disclosed.) Let Us Vote Austin's totals include its odd, though fully disclosed, $10,000 in-kind swap with Reagan National Advertising.

• Prop K's dark-money origins (see "City Slickers,"Oct. 12) helped set up the current pro-audit PAC, but anti-K forces aren't giving up without a fight. Both of the big labor PACs are spending against the right-wing "efficiency audit."

• And once again, IndyAustin is raising questions with its finances; its biggest donor (and in fact the largest so far to anyone this cycle) is a shady student-loan servicer from the Bay Area, with no visible connection to Austin or to any of IndyAustin's big issues. We'll keep looking.

Libertarian Ganders Goosed by Aleshire – 216 Times
After filing multiple campaign-finance complaints against others, Libertarians get slapped with their own