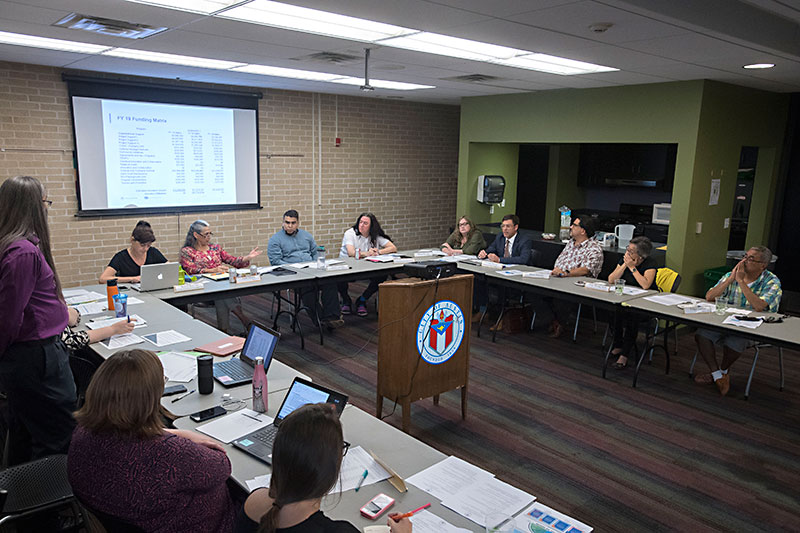 The Arts Commission on Sept. 17, at the beginning of this saga (photo by John Anderson)

The three-act drama about city arts funding that opened Sept. 13 came to a calm close on Thursday, Oct. 4, as City Council approved the FY 19 funding recommendations that the Arts Commission and Cultural Arts Division staff heroically reformulated over an intense seven days.

Pretty much everyone involved in this year's Cultural Contracts process agrees that it could have gone better – a lot better. A drive to expand diversity among arts funding recipients was wildly successful, bringing in approximately 100 new applicants and swelling the ranks of those seeking funding by almost 30%, but in a year when the source of that funding, the hotel occupancy tax, flattened out, but the approval rate for applicants did not (98% of FY 19 applications were funded), that meant many, many more people and organizations were after slices of the same size pie as last year, and some of those slices were bound to be significantly smaller than before. But the groups getting those smaller slices didn't get word from the city about that until September, months after they'd finalized their budgets for the coming year with an expectation that their cultural contract amount would be something close to what it had been the previous fiscal year. Instead, they were learning that their funding had been cut 15%, 30%, 45% – losses in the tens of thousands of dollars – after contracts had been signed and seasons were beginning. After a Peer Panel review part of the process that was already more contentious than usual – applicants characterized some panelists as being ill-informed and disrespectful – the severity of the funding cuts made many applicants feel they were under attack.

That's where the first act kicked off, with phone calls and emails and texts circulating among members of applicant arts organizations, members of the Arts Commission, CAD Manager Meghan Wells and her staff, and no doubt council members, too. It all built up to a charged Arts Commission meeting on Sept. 17 at which numerous speakers used their citizens communications time to express their frustration and concern about how devastating the cuts would be to their organizations and how little warning they'd had that cuts of this size were coming. But discussions had already begun about possible sources of revenue that might mitigate some of the damage to those funding recipients that were most seriously affected, and Act I closed with the Arts Commission agreeing to reconvene the working group which had approved the funding matrix that determined the FY 19 amounts and have the group try to revise it.

The start of the second act occurred largely out of the public eye, with the members of the working group – Arts Commission Chair Jaime Salvador Castillo, Vice Chair Michelle Polgar, and commissioners Lulu Flores and Felipe Garza – meeting three times with CAD staff to identify additional money that could be poured into the pot for applicant funding (they found around $1 million by raiding the budgets for the TEMPO temporary art program and the Community Initiatives program, and holding on to a 5% reserve) and running more than 16 scenarios for how to allocate the $12.47 million they now had among the 421 approved applicants. They couldn't erase all the cuts, but they could cap them at 11%, which meant groups would be looking at a drop of $10,000-$23,000 from FY 18 instead of $15,000-$80,000. That revision was presented to the entire commission at another meeting on Sept. 24, approved by the body, and sent on to City Council for consideration at its Oct. 4 meeting.

The third act played out in just over 20 minutes last Thursday after Council returned from its lunch break. Some groups had been holding out hope that Council might find some way to bring all of the arts funding allocations back up to FY 18 levels – that was the pitch made by Austin Shake­speare board member Shanee Wood­bridge before discussion on the FY 19 recommendations began – but that seemed a long shot, as Tapestry Dance Company Execut­ive Director Acia Gray acknowledged when she spoke. "If there is money back around that corner [that] you [could] just set aside and figure out a way to put us back to where we were last season – new and established organizations – that would be absolutely amazing. But I'm also smart enough to know that [would take] a miracle."

Alas, miracles were not a part of the final act. No one on the dais even mentioned adding more money to the Cultural Contracts pot or revising the allocations for the benefits of those organizations that had taken the largest financial hits. The FY 19 recommendations were approved as submitted by CAD in a unanimous vote (with Ellen Troxclair absent). What did figure into this closing scene, however – and that might have surprised Austinites familiar with the "Arts Wars" of the Eighties and Cultural Contracts conflicts of the Nineties – were the expressions of gratitude from all corners. People made a point of thanking the CAD staff, the members of the Arts Commission, and the arts community itself for working hard and working together: Gray; Ballet Austin Executive Director Cookie Ruiz, who spoke on behalf of the Austin Arts Advocacy Coalition; Council Members Leslie Pool and Ora Houston; and Mayor Steve Adler, who offered thanks to "the arts organizations collectively for recovering from the shock of the moment and being incredibly constructive partners over the last couple of weeks."

Equally significant was Council's attention to reviewing the process and discussing policy regarding arts funding. The Arts Commission and CAD Manager Wells had already signaled their commitment to addressing issues around the funding process. Now, Council was doing the same. Pool asked for CAD staff to address the Audit and Finance Committee, where the program's history could be reviewed and paths forward could be discussed. Ann Kitchen asked to be part of that conversation, as did the mayor. Jimmy Flannigan broached the policy question of how the city wants to use its funding for the arts: "to substantially fund fewer organizations or to provide supportive funds for many organizations? ... I don't know that you can do both with just the hotel occupancy tax revenues." Alison Alter mentioned that she's been seeking clarification about HOT revenue from short-term rentals for some time and wondering whether that could eventually be added to funding for the arts and historical preservation and "a lot of things that people care about." She added a friendly amendment to the motion approving the recommendations that this be referred to the Audit and Finance Committee.

So this play ended, but plenty of groundwork was laid for a sequel, one that will involve the arts community, the Cultural Arts Division, the Arts Commission, and City Council. And perhaps it will ultimately result in less drama during the next funding cycle.