The Lens on Juan Sanchez 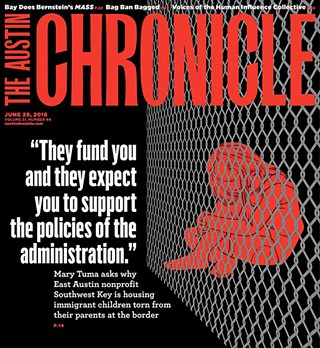 Southwest Key CEO Juan Sanchez granted a rare interview to reporter Jay Root last Saturday at the Texas Tribune Festival. Sanchez's East Austin nonprofit spent the summer under intense scrutiny for its involvement with housing undocumented children separated from their parents at its 27 shelters. But that's not all: The group faces criticism over Sanchez's comparably high salary (at least $1.5 million) and the shelters' more than 200 recorded violations.

Rather than take the opportunity of this live interview to announce a modest pay cut, Sanchez instead doubled down on deserving his earnings, saying people question when a Latino man becomes "successful." And he defended the group's background checks that let through the hiring of a former border patrol agent arrested for child pornography, a fact Root noted could have been easily discovered through a Google search. Sanchez said the Child Welfare League of America will review training and hiring practices at all its shelters, including its Austin office headquarters, in light of child sexual abuse allegations. While Sanchez denied having any financial stake in SWKey businesses during the interview, company spokesperson Jeff Eller later clarified to the Tribune that Sanchez "misunderstood" the question and is in fact invested in an LLC that owns property of one of his shelters in Conroe.

Flying under the radar amid all the criticisms are allegations that Southwest Key employees interfered with attorney-client privilege and fed information to the Trump administration's zealous, anti-choice Office of Refugee Resettlement, especially when it comes to abortion access. Following the interview, audience member Susan Hays, a local attorney who represents pregnant minors, asked Sanchez if he would institute an organizationwide policy to ensure that employees, acting under contract with ORR, cannot "quiz" children on the conversations they have with their attorneys. Sanchez said it was the "first time" he's heard such a claim, and acknowledged it was inappropriate behavior.

Hays told me she's skeptical of Sanchez's surprise considering there is federal litigation regarding the matter. She points to a case that landed at the 5th Circuit Court of Appeals earlier this year that argued a young girl in a SWKey shelter's care who had sought an abortion through judicial bypass was blocked by ORR because the girl had ostensibly changed her mind, albeit only in the form of a handwritten letter. When her attorneys tried to visit her, ORR denied them access. "South­west Key was complicit in actively keeping attorneys from talking to clients," says Hays. She notes that a similar Jane Doe case, in which ORR prevented judicial bypass abortion care, ended in a ruling that has helped ensure more minors are being transported to clinics.

Asked if Sanchez plans to institute a clear policy preventing such breaks in confidentiality, Eller responded that their "staff are trained to not interfere with the attorney-client relationship. We are reviewing that training."