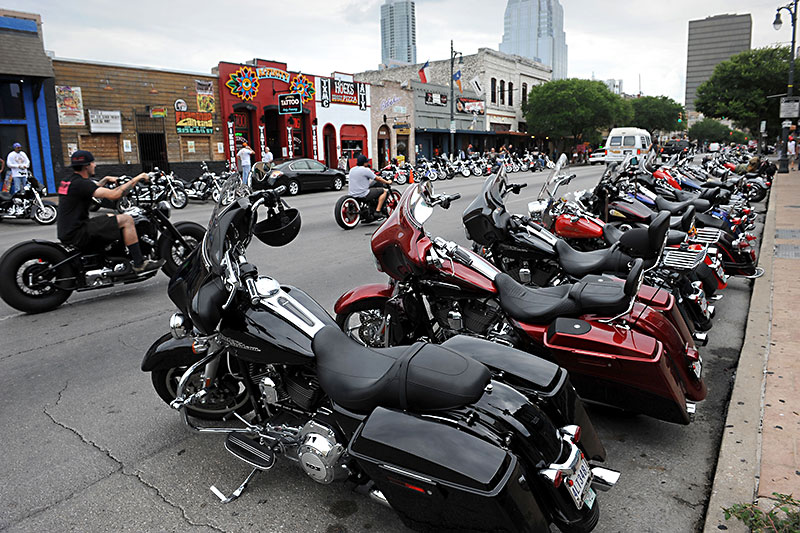 The motorcycles will be back next year. (Photo by John Anderson)

The Republic of Texas biker rally and Texas Heat Wave car show will return to the Travis County Expo Center next summer, forcing the Travis Central Appraisal Dis­trict to find another location for its property tax hearings. A 3-2 vote at the Travis County Commissioners Court on Tues­day rejected TCAD's request to rent the Eastside facility and directed county staff to negotiate contracts with the motorcycle and car events.

TCAD was set to rent the venue from May to August of 2019, when it expects to hear from more than 140,000 county residents protesting their property tax bills. After success at the Expo Center last year, TCAD Chief Appraiser Marya Crigler said she and her staff were looking forward to returning in 2019. They submitted a signed contract to the county and only needed approval from county commissioners, but ROT and Heat Wave, which have both been held in the county for over two decades, objected; TCAD's three-month occupancy would interfere with their 2019 event dates. The ROT rally is set for June and Texas Heat Wave for July.

Last week, commissioners briefly took up the rental issue, but punted it a week so they could try to sort through the situation. The vote followed a tense debate in which commissioners offered a glimpse into how they each expect staff to work with business partners in renting out the Expo Center. On one side, Commissioners Brigid Shea and Gerald Daugherty argued that the county should work to maintain relationships with "longstanding partners," as Daugherty put it. On the other end, County Judge Sarah Eckhardt and Commissioner Margaret Gómez suggested that staff should rent out the 128-acre site on a first-come, first-served basis. In the middle was Jeff Travillion, commissioner in Precinct 1, where the Expo Center is located. He hoped for a compromise in which all three entities would be able to use the facility. Eckhardt and Gómez were the two votes against continuing negotiations with ROT and Heat Wave.

Increased facility rental fees and miscommunication between county staff and the event organizers were at the heart of the dispute. Texas Heat Wave Promotions Director Chris Schneider said rental fees for his event rose from around $27,000 in previous agreements to over $40,000 in the new contract offered by the county. Schneider said Heat Wave was prepared to cut the check, but that he and the event's accounting team needed more time to consider "such a big decision." ROT President Jerry Bragg, however, was less comfortable with the price; it would have been a bigger stretch for his event to afford the increased rental fees. Meanwhile, TCAD was ready to sign a contract for its three-month rental, which would net the county nearly $150,000.

In addition to the increased rental fees, Bragg and Schneid­er expressed frustration with how county staff communicated with them about contract negotiations. Bragg said it was unclear whom he was supposed to work with to negotiate a contract, and Schneider said he was misled on how long his event would have to make a decision on agreeing to the raised rent. Travis County Director of Facilities Manage­ment Roger A. El Khoury refuted ROT's characterization at the Tuesday hearing. "I talked to ROT," he said. "I did everything I can. ... I'm not trying to dump them completely, but ROT did not come to the table and [another] opportunity came."

Now, that opportunity is lost. Crigler said TCAD will likely have to find an alternative venue, which could prove difficult for the appraisal district. "Time is a considerable obstacle for us at this time," Crigler said. "There were competing needs and desires from all parties, we're not going to pass judgment on anybody. ... We're going to respect the decision of the Commissioners Court."

A version of this article appeared in print on October 5, 2018 with the headline: ROT On! Heat Wave Saved!