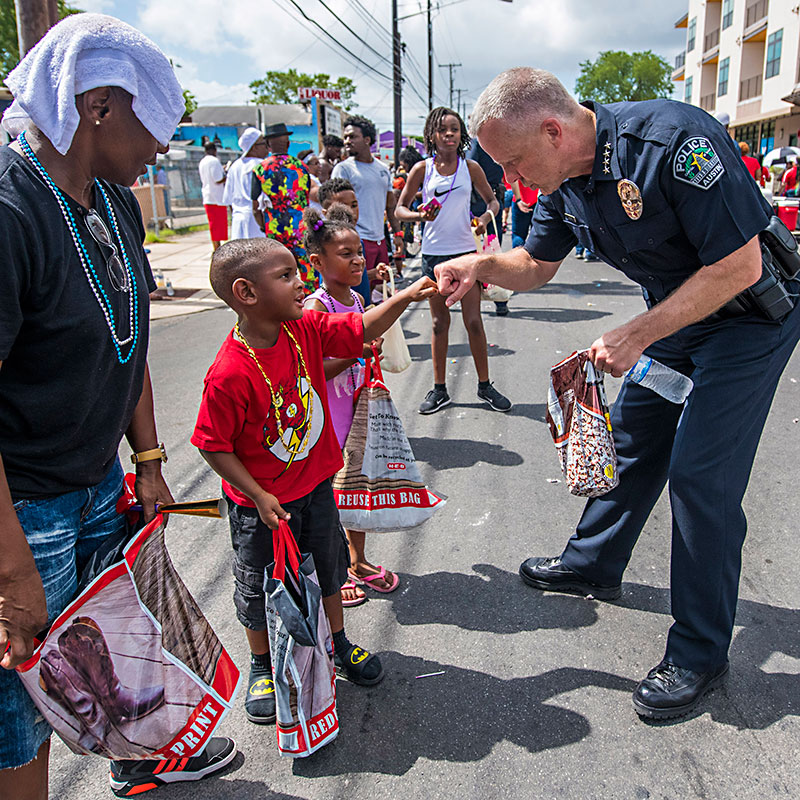 At a press conference last week to detail the results of the Austin Police Department's recent community policing report, Chief Brian Manley piloted APD's new brand: One Austin, Safer Together. It's a reference to Austin's history of segregation, and the department's new focus on improving relationships in communities across the city. Said Manley: "Any time one part of our community is under attack, or any time one part of our community feels like it cannot come to the police for help, our entire community is less safe."

The success of that shiny new tagline will hinge on the department's commitment to its community policing principles. That's where the report comes in. After the Matrix Group's report in 2016 found officers had little to no time to interact with the community, the department spent the next two years addressing the problem. "This really is a progress report on where we're at as a department when it comes to community policing," Manley cautioned. "I say it's a progress report, because this will be a living document that we will continue to update as we continue to make advances in community policing."

APD now has in place actual language detailing its community policing policy so that everyone from the top down knows what that means, and a set of metrics that will serve as the basis for yearly reports going forward. Obviously, components such as staffing depend on things outside of the department's control, which is why Manley emphasized that the report will continue to be updated as the department further implements Matrix recommendations.

Just days after Manley issued his update, Austin Police Association President Ken Casaday joined his fellow labor leaders at the Public Safety Commission on Oct. 1 to raise the alarm about morale issues within APD, the Austin Fire Department, and Austin-Travis County EMS. He described a "disconnect between upper management and midmanagement" that has led to what rank and file view as unfair discipline. That situation is exacerbated, he said, by the meet-and-confer contract falling apart and incentive payouts disappearing with it.

The Police Oversight Advisory Working Group working with the Office of the Police Monitor on best practices for a new oversight system finished its public engagement process at the end of September, and is nearing the end of its work. Stay tuned ...