Scene: It's November of 2018. Amer­ican democracy hangs in the balance. The three branches of government? Not helping! The judiciary's all tainted by dark-moneyed special interests; Congress has abdicated itself of any and all responsibility; and the executive branch – those guys?! – they're the ones driving this awful descent into something that smells vaguely authoritarian.

So what do we do now? What can We the People do? We can vote – to rebuke Trump, reconfigure Con­gress, and in the process begin the long, arduous, sometimes-not-fully-linear process of turning this damn bus around. But we all need to go to the polls on Tuesday, Nov. 6 (or before, if you're early voting). Because staying at home – refusing to stand in line to make your own voice heard – is exactly what the aforementioned and currently operating separate but equal branches want to see from you that day.

Austinites will have a Senate seat to vote on, and a slew of local races, but the most pivotal elections will take place in the U.S. House, where Austin is represented by six different individuals and yet thanks to a few downright criminal cases of gerrymandering have found themselves to be in ideological lockstep with their congressperson in only one of those six districts. If this country is going to get back on track, it'll happen in the House – and across this country races like the five local districts currently held by Republicans are the ones that'll have to flip.

This year's voter registration deadline falls on Tuesday, Oct. 9, meaning if you're not yet registered to vote (and you can check if you are at www.votetravis.com), the clock is running down to register online at tax-office.traviscountytx.gov/voters. Prefer snail mail? Pick up a copy of this week's Austin Chronicle, find a voter registration application form on p.6, cut it out from our pages, and mail it to the county voter registrar's office, PO Box 149327, Austin, Texas, 78714-9327, or deliver it in person to 5501 Airport. Applications must be postmarked by Oct. 9.

If you've moved and need to update your address, you can do that at txapps.texas.gov/tolapp/sos/SOSACManager. Any other questions? Call 512/854-9473 or visit the county's FAQ page online: tax-office.traviscountytx.gov/voters/faqs. 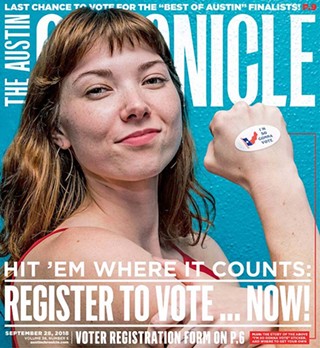 This week's cover was inspired in part by Get Out the Vote drives both locally and throughout the country, particularly the "I'm So Gonna Vote" campaign, put on by the Texas Playboys sandlot baseball team and team captain Jack Sanders, who designed the sticker you see on this week's cover.

Sanders told Chronicle contributor Hannah Wisterman: "We brought up the idea that wearing a sticker that says 'I voted' or 'Yo voté' [on Election Day] was sort of a day late, dollar short. To brag about voting the day after you vote really isn't doing anything. Somebody said, 'Why don't we wear a sticker every day, starting now?'"

The group designed the stickers and ordered 50,000 of them, of which 40,000 have been disseminated across Texas. "We're trying to get it to be a sort of viral thing, too," said Sanders. "There's an Instagram thing that goes along with it." Hashtag: #imsogonnavote.

We'd be remiss if we didn't send a little love to our brethren up in Ithaca, N.Y. – the Ithaca Times – whose idea to put a voter registration form on the cover of their Aug. 22 issue inspired our own civic engagement.

Keep up with all the Chronicle's Election coverage at our Election Central.