Schwertner in February of 2017 (by Jana Birchum)

The University of Texas is investigating claims that state Sen. Charles Schwertner, R-Georgetown, sent sexually explicit text messages to a graduate student he met on campus, according to a Statesman report on Tuesday. Schwertner allegedly wrote, "I just really want to f--- you," and sent the young woman (who's currently anonymous) photos of his genitals. Schwertner "categorically denies any knowledge of the accusations." UT would consider banning Schwertner from campus if the allegations are found true. Schwertner, an aggressive anti-choice politician and head of the Health and Human Services Committee, infamously broke a glass table last legislative session gaveling a pro-choice woman testifier into silence.

A version of this article appeared in print on September 28, 2018 with the headline: Shameless, Sen. Schwertner 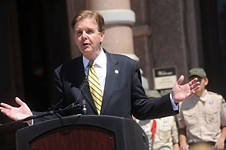