Point Austin: Disorder in the Court … of Appeals

Judicial political campaigns are generally fairly sleepy affairs, most often determined, unfortunately, by partisan straight-ticket voting. An exception could be the November vote for the open Place 6 on the (currently all-Republican) 3rd Court of Appeals, where Democrat Gisela Tri­ana faces Republican Mike Toth for the seat vacated by retiring Justice Bob Pem­ber­ton. (As this issue went to press Wednesday, Pem­berton reportedly resigned, and Gov. Greg Abbott announced that he's appointing Toth to the court for the remainder of the unexpired term, through Dec. 31.)

A March Texas Tribune story reporting on Toth's openly politicized primary campaign raised bipartisan eyebrows. Instead of bland reiteration of a "conservative judicial philosophy," Toth called for "tougher border security … Trump's travel ban … crack down on sanctuary cities … extreme vetting of refugees," and other hard-right policy touchstones. His approach was sufficiently extreme to concern Republican former Supreme Court Justice Tom Phillips, who told the Tribune, "I'm concerned any time a judicial candidate suggests … that his or her election will lead to a particular policy outcome. … [A] campaign based on your view of hot-button political issues confuses rather than than enlightens the electorate" ("Texas judicial candidate embraces Trump," by Jay Root, Texas Tribune, March 2). Backed by copious out-of-state money, Toth then won the GOP run-off.

Recently, local attorneys have been circulating an anti-Toth email by Westlake lawyer Kerry O'Brien, who says Toth is "at best, under-qualified, and at worst, unqualified. And it's obvious that he's pushing red-meat hyper-partisan buttons to cover for it." O'Brien says that while he "almost always" votes for Republican candidates, in this race he'll vote for Triana, and he's also taken the step of filing as a write-in for the Place 6 seat – partly as a GOP alternative to Toth, but primarily "to give myself legal standing in case I could file any court proceedings concerning Toth's candidacy."

O'Brien's objections have less to do with Toth's "highly inappropriate and absolutely misleading" campaign rhetoric, than to what he learned about Toth in reviewing his legal history, such as it is. O'Brien says Toth has little or no experience as a practicing lawyer – he apparently isn't close to meeting the Texas constitutional eligibility standard (Art. V, Secs. 2,6) of at least 10 years as a "practicing lawyer." O'Brien summarizes Toth's record in detail, saying that he's "never filed a state or federal court appellate brief, nor participated in oral argument before a state or federal court of appeals"; "never tried a case [or] argued a substantive motion in state or federal court"; and "very likely never [taken or defended] a deposition." Toth's only "verifiable law practice," writes O'Brien, are two years under Attorney General Ken Paxton (his major political sponsor), as a "gratuitous and unnecessary intervenor" in four cases. O'Brien's email can be read here.

Beyond rank partisanship, Pulliam fails to make a judicial case for Toth.

O'Brien says it's apparent why Paxton hired Toth (now nominally in private practice) and why the A.G. calls him "exceptionally well-qualified" for the 3rd Court. "Paxton cares about Toth's political ideology," writes O'Brien, "and doesn't care about the actual qualifications for the job." Other local attorneys are also alarmed by Toth's lack of experience. Chuck Herring, a prominent Democrat, told me, "Apart from O'Brien's perspective, the idea of electing a lawyer who has been licensed in Texas for only two years to the Court of Appeals is extremely counterintuitive for many Aus­tin lawyers, whatever their political stripe."

By contrast, Herring cited Triana's 30 years of legal practice, including 13 years as a district judge, earlier experience in county court, municipal court, and as a prosecutor. O'Brien says he knows Triana only in her courtroom, but adds, "Triana has a long tenure of experience on the bench, and has always given me the firm impression that she is focused on 'getting it right' on the law."

Triana certainly has her detractors. A recent piece in the right-wing American Spec­tator by Mark Pulliam recalled her 2015 arrest on a potential DWI – it turned out Triana wasn't legally intoxicated, and was eventually cited only for speeding. And she was once reversed by the 3rd Court on an environmental ruling – surprising only if you don't know the record of the all-Repub­lican court on environmental questions. Pulliam calls Toth a "strong conservative" and notes his endorsement by Pax­ton, but doesn't address his utter lack of experience in the practice of law. Else­where, he describes Toth, alarmingly, as combining "the best qualities of Ollie North and Neil Gorsuch." (See "Strange Times Ahead in the Lone Star State," Sept. 12.)

Beyond rank partisanship, Pulliam fails to make a judicial case for Toth. But his piece does suggest that Texas Republicans, accustomed in recent years to winning downballot races by default, might at least be a little worried this time around. "One hopes," Pulliam concludes, "that the peculiar currents at work in the electorate do not lead to a travesty in November." Indeed, voters should consider whether installing a completely unqualified attorney on a major appeals court isn't by definition a travesty. 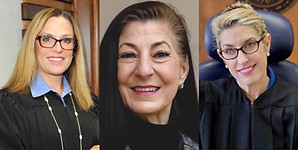 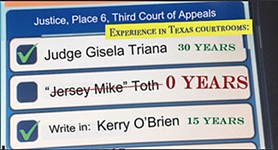