On immigration in McAllen 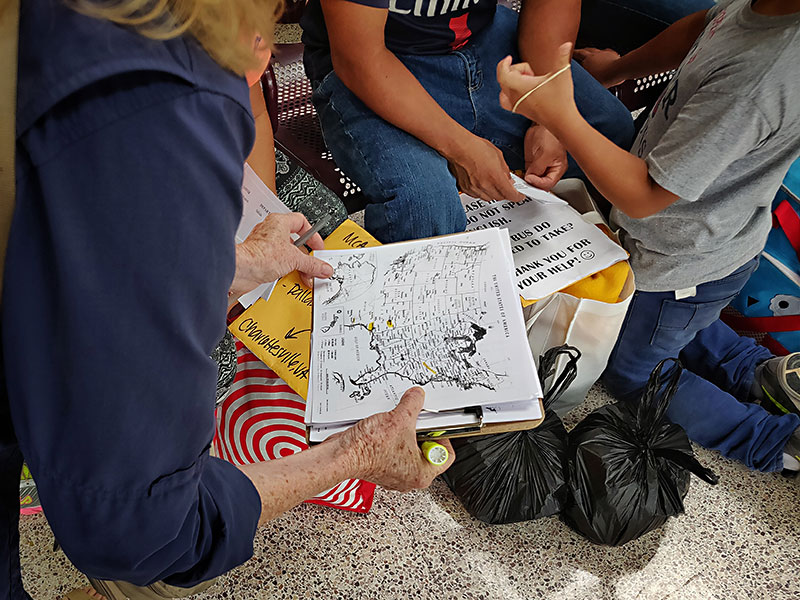 A volunteer helps map out a route for an immigrant trying to visit family in the northeast. (Photo by Martín Steinhagen)

A bus turns and brakes, the hydraulic door opens with a sigh, and people slowly pour out onto the parking lot. There are 60 of them, many parents holding small children. They look tired, wear neither belts nor shoe laces, and most have a black plastic device strapped around their ankles, creating a small bulk under their jeans. They carry bags labeled "Department of Home­land Security" in blue letters. Some women wear shiny hair bands made of pieces from rescue blankets.

A man in his 60s drives his electric scooter onto the lot. He wears an orange vest and has a makeshift ID around his neck. Luís Guerrero tells the new arrivals to gather around him. He's missing one leg, lost from a traffic accident, but he stands up, resting on his scooter with one hand, to give a short speech in Spanish: where to pick up tickets for the Greyhound buses, or get something to eat, and that volunteers are on-site to help – Guerrero is one of them. Just before escorting the arrivals into the station, he adds something they've yet to hear anyone say to them before: "Bienvenidos a los Estados Unidos."

“Please help me,” reads the sign, in big, bold capital letters. “I do not speak English. What bus do I need to take? Thank you for your help.”

Every day migrants cross the southern border and get apprehended by Border Patrol, who detain and question them, and if they're lucky, drop them off here in McAllen, where they're free to board a bus heading in the direction of their friends or relatives somewhere in the U.S. until an immigration court decides their case. And yet as chaotic and unpredictable as President Donald Trump's "zero-tolerance policy" has made so many parts of their lives, the McAllen Cen­tral Station is surprisingly different. Several volunteers and advocacy groups work together to help every person who arrives here. Together, they've created something like a makeshift bureaucracy – a very compassionate one – a well-working routine.

After checking with Guerrero to see if they already have tickets at the Greyhound counter, immigrants walk over a few blocks to the Respite Center run by Catholic Charities. There they can get fresh clothes (and shoe laces), call their families, rest, and have soup. Before their buses leave, they come back to the station with big brown envelopes that list the cities where they'll transfer and also have a message for their fellow travelers: "Please help me," reads the sign, in big, bold capital letters. "I do not speak English. What bus do I need to take? Thank you for your help."

At this point Susan Law takes over. Law recently retired and is now a volunteer with the local network Angry Tias y Abuelas, which organizes and raises money through Facebook. Law helps people understand their trip by handing out photocopied maps of the United States and marking the stops with a yellow highlighter. She also provides each traveler with information about pro bono attorneys.

"I was horrified by family separation," says Law, who started to look for ways to help this summer. She found the "aunts and grannies" and joined the informal network of locals. "I was mad." Her colleague Cindy Candia explains the name of the group of 20 people: In June she had heard asylum seekers were sleeping on one of the bridges over the Rio Grande because they where denied entry. "This has happened before Trump, but not to this degree," she says. So she went to see what the people needed, and hasn't really stopped since. "We are all in this mama bear mode," she says about the group. "The first thing I tell these people is, 'I'm sorry for what our government did to you.'"

Guerrero has been coming to the bus station for six years, since he first witnessed migrants getting dropped off here, disorientated like "chicken with no heads." Now it seems as if he runs the place; and in his own way, he does. He comes here before sunrise and stays all day.

Guerrero glides through the waiting area on his scooter, is greeted by bus company employees and security guards, and gets asked a thousand questions by migrants. He'd been a firefighter for 21 years, he says, a captain, until his accident, and still wears his badge around his neck on the backside of his DIY ID. "I like what I do," he says. "Me, as a firefighter, I help people out."

A woman with curly brown hair says she has been on the road for over a month with her two kids, making her way to the U.S. from El Salvador. A man from a village in Guatemala says the drought destroyed his crops and there is no other work where he is from. He brought his teenage son with him; a couple of days ago they finally crossed the Rio Grande on a raft and turned themselves in to Border Patrol. The last days they spent in "la hielera" – the icebox, what CBP processing centers are called here. It is a cold, windowless place, says the father. "They treat us like dogs." Now he is about to board a bus to meet his daughter on the East Coast. He hasn't seen her in nine years. The man is glad that he didn't get separated from his boy at the border, and now has a date to appear in immigration court.

Some of those crossing the border already have a date in a different court just a few days after entering the U.S. In April, U.S. Attorney General Jeff Sessions told prosecutors to file charges in every misdemeanor case for "improper entry." The effect can be observed in McAllen's federal courthouse, a black-windowed high-rise just a few blocks from the bus station – mass hearings of migrants, conveyor belt justice, where more than 70 immigrants with shackles around their ankles fill the seats intended for visitors. Judge Peter Ormsby reads them their rights and that they are charged with a "lower-level charge compared to what we see here normally." The defendants, mostly men, listen to a Spanish translation through headphones. They plead guilty, one by one, all answering to the same questions the judge repeats each time in the exact same words: "Sí, señor," "Culpable, señor." Sentences get handed out right away: time served, for the majority that had no previous criminal records. Some that had already been convicted for entering the U.S. illegally get 10 days in jail. The judge wishes them the best and says "as a private citizen" that he is sure that there are many "good people" in his court. "We would be fortunate to have you here in the U.S. with us." But he also warns the group: "Please don't come back illegally." That could bring a felony charge, and up to two years in prison. "All rise," says the bailiff. The shackles rattle, the session is closed.

Public defender Miguel A.A. Nogueras packs his files and sighs. These kind of hearings have been his daily practice since May. He has little time to prepare his clients and struggles to make them understand the difference between federal and immigration court. Up to 200 cases a day are decided in the McAllen court, he says. The government pushes for 350, but he would not be able to do his job if that became a reality. Authorities are "not investigating other, violent crimes to prosecute these people," he says. They are not able to actually file charges against everyone.

It's only noon, and back at the bus station, Luís Guerrero gets ready to receive another busload of people. He says he once overheard a man angrily asking, "Why aren't they all in prison, like Trump said?" Guerrero answered: "I don't care who the president is. You can tell him, I'm sending these people up north."

Martín Steinhagen works for the German newspaper Frankfurter Rundschau and is a visiting reporter through the Arthur F. Burns fellowship program.