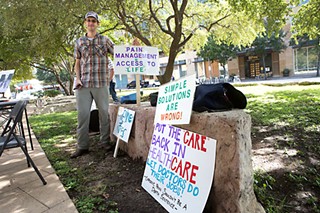 People gathered around the country at "Don't Punish Pain" rallies on Tuesday to advocate for the Centers for Disease Control and Prevention to change its opioid prescription guidelines, which patients say restricted doctors' prescription practices enough to have a negative impact on chronically ill patients. (Photo by Jana Birchum)

City Council returns to regular business today, Sept. 20, with a full plate of contracts and zoning cases (104 Items in all) as well as "compensation and benefits" decisions for Council's direct reports: city manager, city clerk, city auditor, municipal court clerk. See "Back in the Groove,"

So Long Sendero? Central Health has called a special board meeting and public hearing for Saturday, Sept. 22, 1pm, at Central Health (1111 E. Cesar Chavez) to discuss the health care district's FY 2019 budget, and specifically the district's preliminary decision to end its support for the Sendero Health Plan, which currently provides care for 24,000 low-income Austinites. The board's decision would "wind-down" Sendero funding over the next year. See "Naked City,"

Gimme Some Shelter: Renovations have been completed at the Austin Shelter for Women and Children. The newly expanded space, complete with a new residential wing and greater child care facilities, is located in East Austin and owned by Travis County. The city leases the building and Salvation Army operates the shelter, which provides continuous emergency shelter, case management, counseling, and educational services for both single women and mothers.

Southwest Key Sues The Austin-based nonprofit and youth detention operator is suing the city of Houston for "discriminatory and unconstitutional obstruction" of the opening of its new migrant youth shelter. They're seeking damages in excess of $8 million.

Ain't Brain Surgery: If Muhammad can come to the mountain, presumably Ben Carson can come to Austin. The Trump administration's secretary of Housing and Urban Development was in town Wednesday for the groundbreaking of the Pathways at Goodrich Place, an affordable housing project sponsored by the city of Austin's Housing Authority. Carson and Federal Housing Commissioner Brian Montgomery also visited a related project, the Pathways at Manchaca Village.