As Long As There's a Plan 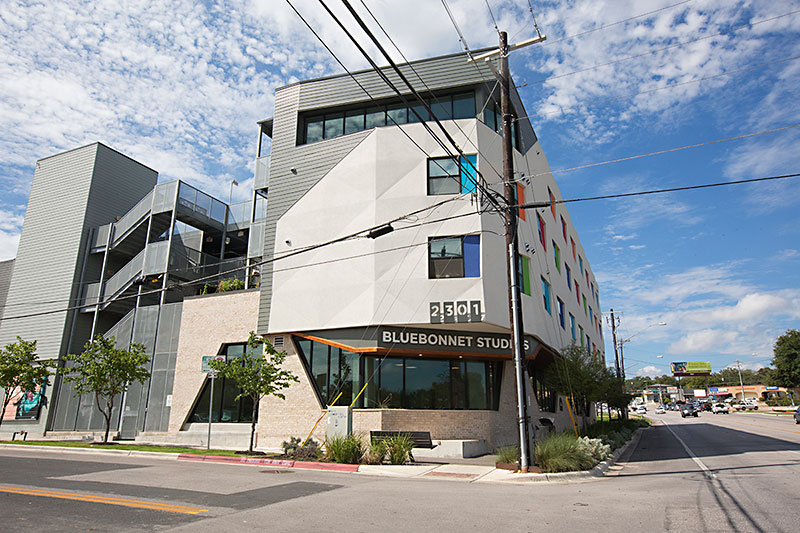 The Bluebonnet Studios on South Lamar. Foundation Communities built the low-income housing project, with funds from the 2013 housing bond. Each unit is available at or under 50% MFI. (Photo by Jana Birchum)

Behind the abandoned Home Depot at I-35 and St. Johns sits a small "pocket park" – two picnic tables and a few small shade trees in a grassy field. The city has owned the lot, as well as the abandoned building and a neighboring property, since 2008, when it was purchased with the intent to build a new courthouse on the site. Today, it's one of several properties being eyed by residents and City Council members for possible affordable housing.

"It's significant," Greg Casar said Tues­day of the site's 20 acres, as he pointed out the full expanse. "And now, it's our compost bin collection." Hundreds of stacked green compost carts are stored around the blocked-off parking lot. Casar, whose district includes the rapidly gentrifying St. Johns neighborhood, has been one of Coun­cil's loudest affordable housing advocates, and had a hand in getting Proposition A, the $250 million housing bond, onto Novem­ber's ballot. If passed, the bond will likely play a large role in converting the Home Depot, among other sites, into housing for low- and moderate-income families. He said, "The reason I really emphasize the housing bond is it's hard to help as many people as we want to help – and change the course of where the city's heading – without a significant amount of dollars." Prop A has already made history as the largest housing bond the city has ever offered to its voters, and could go a long way toward uniting Austin's split over how to treat its neighborhoods moving forward.

On Sept. 10, a day before Council passed the city's 2019 budget, activists behind the People's Plan to immediately address displacement unveiled a budget rider to prove that funding for their plan is feasible. Currently, nearly half of the plan's budget relies on voters passing Prop A. The plan proposes dedicating $25 million from the bond to fund Mayor Pro Tem Kathie Tovo's resolution to create a public strike fund to acquire apartments for low-income families, plus an additional $3 million to fund historic preservation surveys, the enactment of Tovo's Right to Stay resolution, and an Anti-Displacement Office. The rider suggests that the remaining $30 million needed to fully fund the plan could come from the sale of a city-owned property. Plan budget author Frank Rodriguez believes the city can get a head start on that front, before the proposition goes to the polls.

Yet, with the passage of Mayor Steve Adler's own budget rider last Tuesday, which affirms Council's commitment to urgently addressing displacement, it would seem that city leaders and activists are finding themselves on the same page, something affordable housing stakeholders such as Foundation Communities' Executive Direc­tor Walter Moreau are excited to see. As Moreau noted, CodeNEXT caused quite the divide, but he hopes that whatever people think about it, voters will realize that the zoning rewrite is "entirely separate from the fact that, as a community, we need to invest to keep Austin affordable."

Moreau, whose organization provides low-income housing for approximately 6,000 Austinites and has wait lists for up to a year at some properties, noted that the $65 million from the 2013 housing bond is "spent and gone." Without Prop A's passage, he said, Foundation Communities' work, along with that of Habitat for Humanity, Meals on Wheels, and more will come to an end.

But the People's Plan is asking for more than just "affordable" housing. As Rod­ri­guez's colleague Dr. Jane Rivera noted, in Austin, affordable housing means it's priced for families making 80% of the median family income ($81,400 a year for a family of four), while the families who truly need help here make 50% or less of MFI. She hopes that, if the bond passes, at least the 20% earmarked by the People's Plan rider goes toward keeping those folks housed within the city.

Rivera, along with Rodriguez and Adler, referenced the gentrification study released on Tuesday (see "Council: Back in the Groove," Sept. 21). Unsurprisingly, UT researchers echoed much of the plan's sentiments, and that's ultimately why the People's Plan calls for immediate action, something both Adler and Casar agree on, though Casar noted that acting with immediacy isn't always as easy as it sounds. Regarding the Home Depot site, he said obstacles such as implementing streets, driveways, traffic lights, and utility access can drive up building costs, which can, in turn, drive up the cost of rental units, thereby gentrifying the project. Bond money, he said, could help alleviate some of those concerns.

Adler also noted that the bond could open the doors to numerous resources, but insisted the urgency of addressing Austin's displacement problem "doesn't go away" should it fail, and Council would need to "figure out other ways to move forward." He reminded that next year's budget adds additional funding to tenant protections and programs to mitigate homelessness.

Rivera and her colleague Fred McGhee aren't so sure, however, that the city is taking the issue as urgently as needed. And Rivera, who said she'd "like to" feel hopeful, isn't so certain the passing of the bond could unite the two sides. "I'm a realist and I really don't know," she said, "but the mayor gave his word that he supported our project."