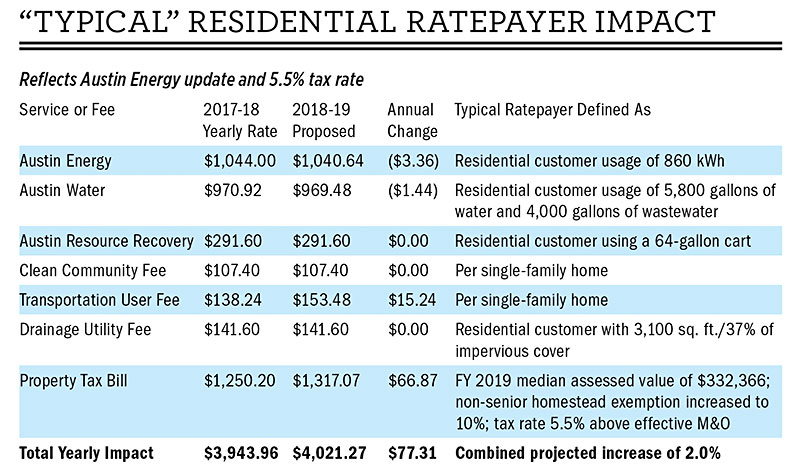 As adopted by City Council Sept. 11, the FY 2019 budget reflects the following cost changes for a "typical" residential homeowner (median home value of $332,366): an annual tax bill increase of $66.87, with combined fees (essentially the Transportation User Fee) bringing the total increase to $77.31 ($6.44/month). Fees for both major utilities will decline slightly.

City Council arrived at annual "budget readings" Tuesday morning (with fallback meetings Wednesday and Thursday) with a sense of general consensus about the overall budget: a $4.1 billion "All Funds" budget (including self-funding enterprise departments) and a roughly $1 billion "General Fund" budget – the expense budget, where most of the annual spending decisions are made. Having already adopted a potential "maximum" property tax rate increase of 6% (2% below the 8% "rollback rate" that would require a public vote), Council's major decision remained whether to meet that 6% limit or stay closer to the 4.9% increase earmarked in City Manager Spencer Cronk's proposed budget.

It’s both a financial and political decision.

It's both a financial and political decision. Going to 6% would mean an additional $5.2 million for various public needs that remain outstanding, and there was already a list of those circulating on the dais – e.g., emergency mental health care, homelessness programs, deferred facility maintenance – that appeared to have tentative majority support in last week's budget work session. Keeping the tax rate as low as possible promises political dividends – on the other hand, the looming legislative threat to lower the rollback rate to 4% or even 2.5% (proposed by Gov. Greg Abbott) creates pressure to set this year's rate as high as possible, as a cushion against future cutbacks. Annual cost drivers alone – employee raises, health insurance, purchasing costs – continue to rise, and the money has to come from somewhere.

Last week, Deputy Chief Financial Officer Ed Van Eenoo repeated his warning that a lower cap on tax hikes would mean much more difficult budget years, and perhaps cutbacks for various city programs. "I've been telling you this for a while," he said, answering a question from Council Member Pio Renteria. "At a 4% cap, I don't see our budget structurally working. It will have to fundamentally change," a predicament that will not be unique to Austin. Whether city officials statewide can again persuade legislators against a lowered cap is a question for 2019.

As for this week, Council entered Tuesday with what appeared to be rough consensus to try to stay close to a 4.9% rate increase, but also to find ways to fund a few additional programs – either with reallocated dollars within the draft budget, or by incrementally raising the tax rate to accommodate some of those expenses.

In a full day's work on Tuesday, they did a little of both. After an early but clearly tentative vote to go to 5.9%, and to allocate the additional funding (about $5 million) to reserves – they returned from lunch and began chipping away at that potential rainy day fund. 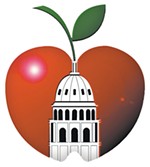