People's Anti-Displacement Plan Gets Its Work in Early

Planning for the people

The city's fiscal year 2019 budget passed on Tuesday (see Michael King's coverage above), bringing a sooner-than-expected end to money talks for the next year, but some folks have already begun looking to 2020. On Monday, authors and supporters of the People's Anti-Displacement Plan gathered at City Hall to advocate for the adoption of their own proposed budget rider to curb the city's growing displacement of low-income residents. Though largely contingent on the passage of the city's $250 million housing bond in Novem­ber, planners still believe the city can take immediate action to address the impact of ongoing gentrification.

Though the proposal asks for just over $58 million, Jane Rivera, Fred McGhee, and Susana Almanza insist the money will not come from or affect the city's general fund. Instead, they want Austinites to pass the Proposition A housing bond, from which they're seeking $28 million to acquire deeply affordable housing. As proposed, the remaining $30 million would also not come out of the just-approved budget, but from the sale of HealthSouth, a city-owned property at 12th and Red River. Offered as an example, the group chose the property because a city consultant "recommended" HealthSouth be sold, as it's "unfeasible to develop for on-site affordable housing."

• $3 million to expand use of Neighborhood Conservation Combining Districts and Historic Districts;

• $1.5 million to create and implement a Right to Stay/Right to Return program to keep residents in Austin;

The group also wants the city to declare an "affordable housing and displacement state of emergency" to "generate a sense of urgency" about producing low-income housing, and to examine development impacts on the "natural and cultural" environment. Those are both considered "non-budget requests."

In a good faith effort, Mayor Steve Adler proposed his own rider on Tuesday after meeting with Rodriguez and the group's pro bono attorney Fred Lewis over the weekend. The rider, which Council approved, tentatively commits to prioritizing funds from the housing bond for "urgent implementation to address rapid gentrification, displacement, and homelessness." It also instructs City Manager Spencer Cronk to treat Prop A and non-bond-related affordable housing resources with the same attention given to 2016's Mobility bond. Lewis said the group was "very appreciative" of Adler's support.

The People's Plan was originally conceived in January to address East Austin's gentrification and displacement. In May, Council unanimously passed a resolution directing Cronk's office to analyze its directives and make recommendations on the suggested actions by Aug. 31. Though that deadline was not met, city staff have been meeting with plan authors. Additionally, Mayor Pro Tem Kathie Tovo sponsored a Right to Return resolution in March, which passed unanimously and was also due back to Council in August. She told me on Tuesday that she believes city legal is still exploring how to move forward with that program and believes it could be a "really good strategy" to keep people with generational ties to Austin here, while also helping those who've been forced out to return. Tovo also said she's not in favor of selling HealthSouth and believes it could be a site for affordable housing.

A version of this article appeared in print on September 14, 2018 with the headline: People’s Anti-Displacement Plan Gets Its Work in Early 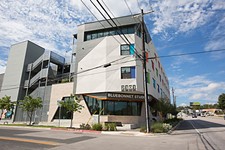 As Long As There's a Plan
Council, "people" co-exist on effort to create affordable housing