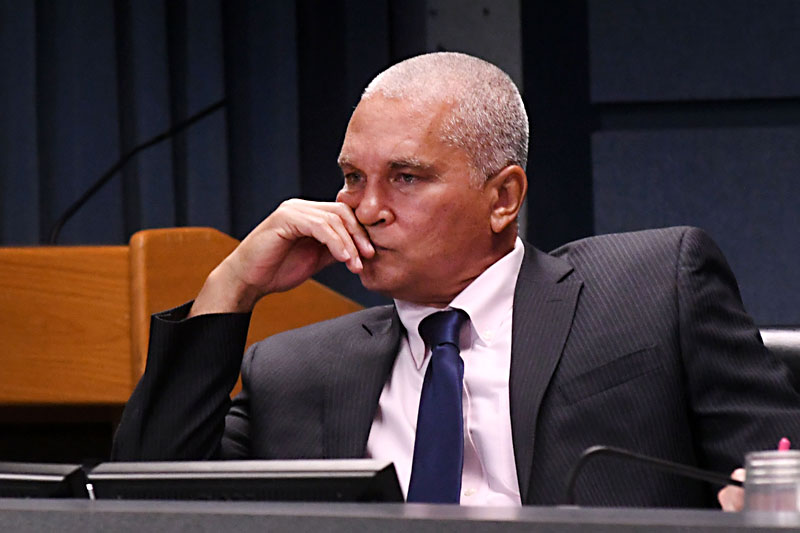 Fellow trustees aren't happy that Ted Gordon took his Eastside "manifesto" to the press before discussing it with his colleagues. (Photo by John Anderson)

A group of East Austin community advocates led by Austin ISD District 1 Trustee Ted Gordon presented a 15-point "manifesto" last week of issues they say have gone unaddressed by the school district. Chief among the demands is a call for district administration to "do all in its power" to raise academic achievement among minority students; improve the compensation of and benefits offered to teachers, especially to those working in schools with high concentrations of low-income students; and "restructure school boundaries, or permit East Austin to form its own school district" to end segregation and inequity within AISD schools.

Speaking at a press conference, attorney and Eastside schools advocate Jim Har­ring­ton said it was "time for interminable talk" from the district to end, and that the group would not accept "token bread crumbs pitched to East Austin from West of I-35" in place of real solutions. He warned that if the demands in the manifesto were not met, the group could help stage student walkouts (which could impact how much funding AISD receives from the state) or lawsuits targeted at the district.

On Monday, Gordon said he hoped the district would respond to his coalition's concerns, but said the gaps in achievement between black and white students are "inexcusable." (On the 2018 STAAR exams, African-American students met grade level standards at a rate of 32%, compared to 76% among white students.) Gordon acknowledged that relying on test scores could be part of the problem in assessing student performance, but said "it's the system we're stuck with" – one of the manifesto's items calls for AISD to develop alternative accountability standards that measure school climate and other metrics not captured by the state.

Several of Gordon's fellow trustees expressed a willingness to explore the proposals, and AISD Superintendent Paul Cruz put out a statement last week that reads, in part: "Austin ISD is committed to providing the best education for all students and ... We acknowledge there is still work to do when it comes to equity and we encourage constructive engagement around this issue."

Although other trustees agreed that Gordon raised valid concerns, they said they were frustrated by his decision to go to the media instead of bringing his issues to the board. (Gordon said he has done so in the past, but to ineffectual response from the board and district administration.) "At the end of the day, we all have to work together to improve academic outcomes for all students," said Place 8 Trustee Cindy Anderson.

• Decentralize and place administrative staff in schools throughout the district

• Address the fiscal crisis equally throughout all schools

• Confront the encroachment of charter schools east of I-35

• Employ an Equity and Innovation Officer who's hired by, and reports directly to, the board of trustees

• Expand the auditor's role so that it will be transparent, and systemically evaluate all financial and academic programming

A version of this article appeared in print on September 14, 2018 with the headline: No More Token Bread Crumbs