T.A. Brown and Menchaca: From the Ground Up 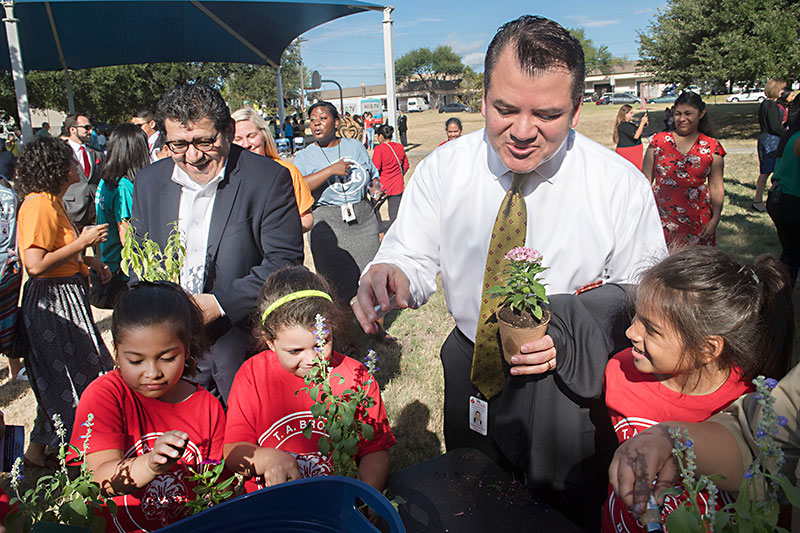 The Austin Independent School District took a few steps this week toward modernizing T.A. Brown and Menchaca elementary schools, two campuses targeted as early projects of the 2017 bond program. Both will see new buildings to present a fresh approach to what a public school looks like.

A site dedication at T.A. Brown, off Lamar and West Anderson, was held last Wed­nes­day, nearly two years after the school shuttered midweek when a team of engineers found the building's floor in danger of collapse. (Students were sent to other schools.) The original campus was 60 years old, well above the AISD average of 46, so instead of paying for costly repairs, the school was demolished the next year.

Brown's new building will occupy a different part of the same 10-acre lot, and is projected to open in January of 2020. When it does, the new school will house Brown's students, as well as students from Webb Primary, located one mile away. The construction is expected to cost $30.8 million, and will boost Brown's student capacity from 449 to 522.

Brown Principal Veronica Sharp talked Wednesday about a "more holistic" learning experience, with an outdoor classroom, community garden, and maybe even some goats under the students' care. She said a more hands-on, "problem-based learning" approach would help students succeed academically and culturally, and the school's "working on balancing" that approach with achieving successful STAAR results. "We are scored based on STAAR," she said, in reference to the state's academic readiness assessment, "but the focus on outdoor learning will give children voice and choice. ... We want to make sure they are not just" preparing for tests.

The dedication ceremony was an emotional event for many parents of current and former students, several of whom described feeling heartbroken when the original campus shut down. Brenda Boone and Norma Hernendez, whose children and grandchildren all attended the old Brown, watched from the back as AISD Super­in­ten­dent Paul Cruz dedicated the site. Boone said she "never thought the day would come" when Brown's students would "get to come home." Both she and Hernendez showed an attachment to their "community school" as a point of pride in the neighborhood, an idea that many believe helps make a school successful. "For us, it was more than a school," said Hernendez. "It was a family."

“We have to change the way we think about how to educate students.” – Eliza Loyola, Menchaca Elementary principal

In South Austin the next morning, hundreds gathered at Menchaca to break ground for the school's new building. The original was built on the corner of Manchaca Road and FM 1626 in 1975, and will be demolished in 2020, when construction is complete. Menchaca's new building will sit deeper on the 20-acre lot, away from the busy thoroughfare. Principal Eliza Loyola said it will incorporate "learning studios" with "flexible walls and furniture" that can be configured to support a particular lesson, or open collaboration with a neighboring class. It'll also bring an end to the plumbing, electrical, and air conditioning issues that have persisted at Menchaca, and will boost student capacity from 606 to 870, needed relief for a school that spent the 2016-17 school year at 123% of its recommended enrollment.

Like Brown, Menchaca will also emphasize outdoor learning, with designated outdoor classrooms, art rooms with wall-to-wall windows looking out onto campus, and a hedge maze to function as a "cool-down area" for students to wander through when they are frustrated or anxious. Loyola said the new design ideas were critical to bringing about a shift in how public schools operate: "We have to change the way we think about how to educate students," she said. "We have to keep improving their learning experience." Menchaca's modernization effort is expected to cost $33.3 million.

The Menchaca groundbreaking put on display the value of a "community school" to those who live nearby. As at Brown, some parents in attendance won't have elementary-aged children by the time the new campus opens up. Still, they were out there, in the heat, celebrating a modernized future for Menchaca. One parent, Lisa Cagle, whose child will be in middle school next year, said it was the "great community" at Menchaca that brought her out. Echoing the grandmothers at Brown, Cagle said, "The teachers and administrators are more like friends and family."