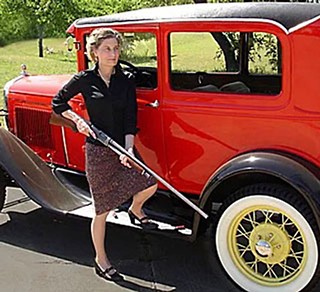 On her GOP campaign website, Laura Pressley conjures Bonnie Parker (no Clyde necessary) in armed defense of a vintage automobile. "In the 1940s," she declares, "no one questioned the right to bear arms or to have paper ballots." Indeed, electronic voting machines, like computers, are a more recent innovation.

Former City Council candidate Laura Pressley – handily beaten but permanently unbowed in the 2014 District 4 Council race by since re-elected incumbent Greg Casar – continues to pursue her election contest against Casar, previously rejected by a state district court and the 3rd Court of Appeals. Pressley has appealed to the Texas Supreme Court, which has not yet agreed to consider the case. She claims the general election and run-off were illegally administered, and based on electronic ballots long accepted in state elections but which she charges are unreliable ("The Never-Ending Election Contest," June 1).

While that case simmers, Pressley has gotten more publicly active in the state Republican Party, running for the party's executive committee from Senate District 14 (defeated in June, at the state convention) and now taking up the cause of stopping "illegal voting" in Texas. According to an Aug. 30 press release, Pressley has signed on to the ludicrous conspiracy claim that "more than 280,000 non-citizens in Texas are registered to vote, with another 4,000,000 registered voters in question." The release offers no evidence of the charge, but cites as sources political fringe groups Grassroots America and Direct Action Texas.

Pressley joins their call for supporters to contact Gov. Greg Abbott's office and that of Secretary of State Rolando Pablos, and demand that the officials "release the data" supposedly reflecting the hundreds of thousands (millions?) of "non-citizens" registered to vote. Since even overzealous GOP administrations have failed, over decades, to find more than a handful of illegal voters – most of those unintentional – it's unlikely that Abbott will respond substantively to the demands. However, Pressley advocates persuaded Attorney General Ken Paxton to file an amicus brief supporting a Supreme Court review of her election challenge ... so maybe her baseless charge will provoke at least some rhetorical campaign amplification, and further suppress turnout – the actual goal.