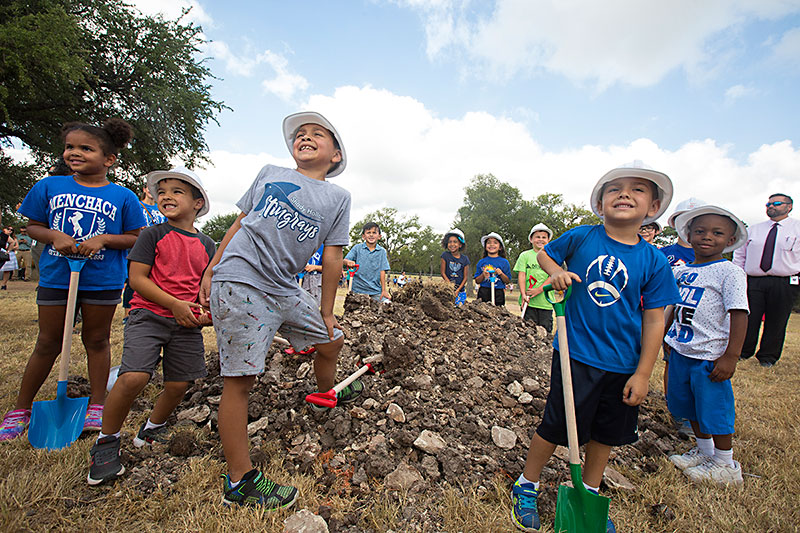 Students at Menchaca Elementary got out their shovels last week for a groundbreaking ceremony for a new school, expected to be completed in 2020. See "From the Ground Up," Sept. 7. (photo by Jana Birchum)

Let's Talk Budget No regular City Council meeting this week, but the dais will convene Thurs­day, Sept. 6, for what they hope will be the final budget work session. Budget and property tax rate adoption scheduled for Tuesday, Sept. 11 ... unless they need to add a couple of days. See "Room to Move," Sept. 7.

Don't Wear White Labor Day kicked off the unofficial start of the campaign season (already at full speed), with candidates up and down the ballot out stumping, door-hanging, tweeting, and Facebooking at jet speed. See this week's "Election Ticker," Sept. 7, and follow Civics 101 and Daily News online for updates.

And They're Off The City Council public forums are multiplying, with the next city-sponsored one tonight (Sept. 6) for District 1: Asian American Resource Center, 8401 Cameron, 6pm.

Not Dark Magic That wet stuff falling from the sky over the Labor Day weekend and Tuesday was indeed rain, making a small dent in the drought that has settled on Central Texas. While we pray for a little more, the city's Stage 1 watering restrictions remain in force, allowing one designated day of watering per week (more info at www.austintexas.gov/department/water-conservation).

McKalla Terms Set The final term sheet for Precourt Sports Ventures' financing, development, construction, operation, use, and occupancy of McKalla Place is available for your perusal. Read all 30 pages at www.austintexas.gov/mckalla.

More on that Franklin County (Ohio) Judge Jeffrey M. Brown declined to issue a ruling on a motion to dismiss in the lawsuit brought by Ohio Attorney General Mike DeWine and Columbus City Attorney Zach Klein against PSV over the latter's attempts to relocate the Columbus Crew to Austin. If Brown eventually decides to dismiss the lawsuit, as PSV has asked him to do, the road could finally be cleared in the battle to bring Major League Soccer to Austin.

Take Your Health care Texas Attorney General Ken Paxton was in Ft. Worth on Wednes­day to challenge the constitutionality of the Affordable Care Act. Thanks, Ken.

The Trump Supremacy The Chronicle generally maintains its focus on Austin, but this week we were reminded that the U.S. is governed by a man his own advisers routinely deride as an "idiot," moron, or worse. Bob Woodward's new book, Fear, recounts a White House run by an incompetent bully and full of craven sycophants barely dodging the apocalypse. Fear, indeed.