City's Tourism Commission Off to a Rocky Start

Two meetings in, and the city's new Tourism Commission still can't manage to elect its leadership. City Council created the board in June to both fill an oversight role over the ever-booming industry and also provide input on the city's potential use of Hotel Occupancy Tax revenue before the budget process (see "Room to Move," Sept. 7). That second mission is clearly now imperiled, because as the budget steam train continues full bore, the new commission remains stuck in the muck, unable to even agree on its first order of business.

The split is indicative of the fissure on Council over the tourism industry, the HOT revenue it brings the city, and the proposed Convention Center expansion that could be funded through those dollars. Mayor Steve Adler has long championed the $600 million expansion plan for the Convention Center, a dream deferred when Mayor Pro Tem Kathie Tovo had it sent to the University of Texas for further study. Tovo's wing of the dais, which on this issue includes Ora Houston, Ann Kitchen, Leslie Pool, and Ellen Troxclair, has been skeptical of not only the expansion, but also Visit Austin, the marketing arm of the Convention Center. Last year, Visit Austin came under scrutiny for how it used funds to court potential business. (An audit later found no significant compliance issues.)

Given the somewhat bitter history, it shouldn't have been such a surprise when, at the commission's first meeting on Aug. 28, the wings of appointees also found themselves at impasse. It never should have come to a stalemate, but Alison Alter's appointee, Michael Cannatti, was held from attendance at two meetings due to a procedural hangup. Without his tie-breaking vote, the remaining 10 couldn't find it within themselves to make a decision on who should run the meetings.

One group – including Kitchen's appointee Bill Bunch (a vociferous critic of Visit Austin), Pool's John Riedie, Tovo's Kate Singleton, and Troxclair's Mary Katherine Stout – threw its support behind Houston's pick Michael Searle (Troxclair's old chief of staff) for chair, while remaining commissioners – Ed Bailey (Pio Renteria), Vanessa Fuentes (Delia Garza), Rachel Magee (Greg Casar), and Scott Joslove (Jimmy Flanni­gan) coalesced around Steve Adler's appointee Catlin Whitington, who works for South by Southwest. Bunch said that while he was sure Whitington would do a fine job in the chair's capacity, he objected on grounds that South by South­west has such a stake in the tourism industry.

That argument didn't persuade anyone on the other side, nor did Joslove (of the Texas Hotel and Lodging Association) bring anyone over with his argument that no one – including Searle – is without prior opinions on the subject, and therefore Whiting­ton shouldn't be counted out simply because he has an industry job. "I don't see the conflict of interest there," he said.

It rose to theatre of the absurd levels when the liaison running the meeting called for nominations and eventually a vote on vice chair, and the same dynamic played out with different names. The debate over the value of experts should've been disturbing – but this is the Trump era after all. We're used to it by now, sadly.

And things didn't get much more reasonable in the next meeting, on Tuesday, which took place in City Hall's Boards and Commissions room and will soon be on tape. (Thank goodness.) The Whitington wing thought they were on a path to victory because Bunch wasn't present at the meeting's start, but he soon entered and cast an equalizing vote for Searle, who until Bunch had arrived had been frantically checking his phone.

After failing again to confirm either leadership role, the commission finally began its regular business, which included briefings on the Visitor Impact Task Force, HOT revenue and state law, as well as a discussion of how the tax plays into the fiscal year 2018-19 budget. Nothing that happened after the initial chair discussion suggested the two sides are any closer to mending fences and working together. It's hard to see why they would, when each side believes, as Joslove suggested in August, that the other is trying to vilify it from the jump.

A version of this article appeared in print on September 7, 2018 with the headline: Peace and Harmony? 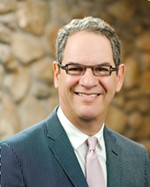